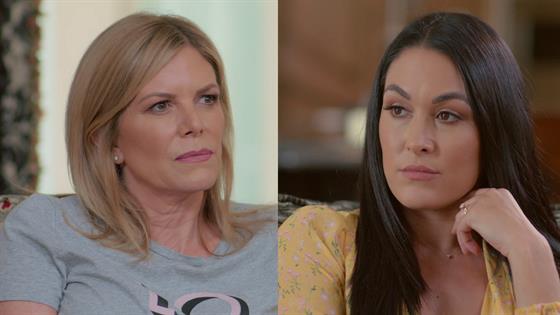 In this sneak peek clip of Thursday’s episode of Total Bellas, Brie Bella finds herself in a heated confrontation with her mother, Kathy Colace, when the retired WWE star reveals that she’s reconnected with her father.

The news comes as Brie and her twin sister Nikki Bella are casually chatting with their mom. Nikki broaches the subject of her and Brie’s dad Jon Garcia at the beginning of the clip, explaining that she believes “people can change.”

“A part of me feels like maybe dad is in a better place now,” Nikki says. I haven’t seen him in, what? Over five years.”

Brie, on the other hand, admits that she’s seen him at least twice in the past year—something her mother was unaware of. Kathy is clearly taken aback, despite just telling Nikki that she hopes her and Brie will “start a new relationship” with their father.

“Wow, you never even said anything,” Kathy tells Brie, hinting that what she’s really upset with is her daughter’s omission of the truth.

Meanwhile, in a confessional interview, Brie opens up about what initially drove her to initiate a reunion.

“For a long time, we’d go on and off. And it really took my husband to be like, ‘Brie, if my dad was still alive, I’d do anything in the world to text him. You’re lucky you have that,'” Brie explains to the cameras. “I don’t want to hang onto anger. I don’t want to keep thinking about the past. I just want to let go. But I didn’t tell my mom because I knew it would hurt her.”

Brie did tell Nikki, though. She explains that she was “always so supportive,” but at the moment, she’s “shocked” because she didn’t think Brie would tell their mom.

Another person who knew about Brie and Jon’s attempts to mend their relationships? The twins’ nana.

“Wow, that’s gonna be another conversation,” a betrayed Kathy responds.

Things only get worse, and Kathy ends up yelling “bullsh–t!” at Brie.

Watch the tense clip above, and see what happens between the mother-daughter pair on Thursday’s all-new Total Bellas.

Watch a brand new episode of Total Bellas Thursday at 9 p.m., only on E!