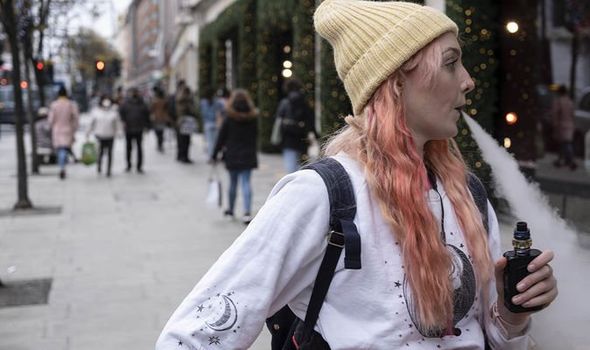 And three quarters of those polled feel smokers and vapers should check with non-smokers before puffing away in a group situation. Nearly half (45 percent) have even asked smokers or vapers not to indulge around them, with Londoners more confident to speak out (70 percent) than any other region.

The research by Swedish Match, the producer of tobacco-free nicotine pouches Zyn, also found one in five (21 percent) felt “empowered” when asking friends not to vape or smoke around them.

Another 18 percent were left feeling “strong”.

Others felt “justified”, that it was their right to ask people to stop smoking near them and that they were simply standing up for themselves.

But more than half (58 percent) have resorted to switching seats or moving away from friends who are smoking or vaping around them.

It also emerged that 65 percent think someone who smokes in a group environment without asking first is ‘inconsiderate’, while 54 percent said they are “thoughtless” not to check with others.

Just over six in 10 parents (62 pe cent) ask friends and family who smoke or vape near their children to stop.

And nearly a third (29 percent) keep them away from friends and family who smoke or vape altogether.

Despite news that Oxfordshire is considering a smoking ban for outdoor hospitality as part of plans to become the first smoke-free county by 2025, a whopping 80 percent of smokers admitted to lighting up next to non-smoking family members.

More than a quarter (27 percent) never even ask the people they’re with if it’s ok for them to smoke or vape around them.

Hearteningly, 70 percent of smokers believe you should always ask for permission to smoke for those around you.

And nearly half of parents who smoke said they don’t smoke in front of their own kids.

But 62 percent admitted to smoking or vaping in front of the children of their friends and family.

The research, carried out via OnePoll, also found one in five smokers admitted to feeling embarrassed when their friends or family moved children away from them when smoking.

Another 17 per cent felt offended and 11 per cent went as far as to say it made them angry.

A spokesman for Swedish Match, producer of Zyn, said: “For those who use nicotine products but don’t want to miss out on a moment with their family or friends, Zyn tobacco-free pouches are a discreet, convenient alternative to smoking or vaping.

“You place them under your top lip for up to an hour and don’t have to worry about offending anyone or suffer from any fomo (fear of missing out).”