The real life Jack and Rose? Uniform badge gifted to a Titanic survivor from Norwich by a crew member she struck up a romance with during her time on the doomed liner is set to sell at auction for £60,000

A brooch a Titanic steward gifted to a female passenger in a real-life love story likened to Jack and Rose from the epic film is set to go on sale.

Roberta Maioni, from Norwich, struck up a romance with an unnamed crew member during the four days she spent on board the ill-fated liner. The then 20-year-old was the maid to a first class passenger and it is thought she fell in love with the young man who was their cabin steward.

She kept the white star-shaped badge that he gave her as a memento after the ship was struck by an iceberg until her death in 1963, aged 71.

A private collector who bought it from her descendants more than 20 years ago, is now selling the brooch at auction for an estimated £60,000 alongside her typed account of the tragedy worth an additional £5,000. 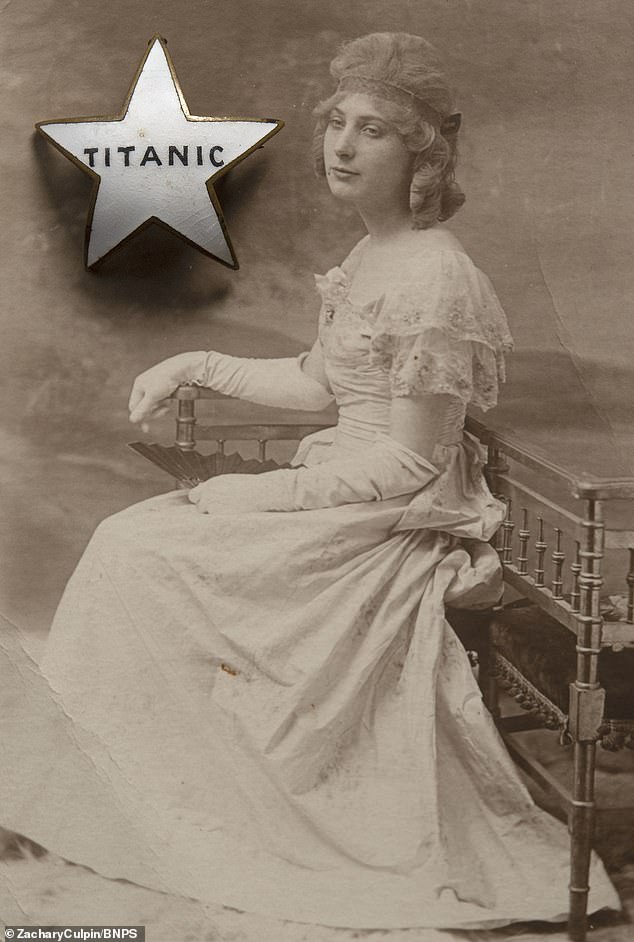 A brooch that Roberta Maioni (pictured), from Norwich, was gifted by an unnamed crew member of the Titanic is up for sale

Roberta and the unnamed crew member’s short romance bears striking similarities to the one between Jack Dawson and Rose DeWitt Bukater, played by Leonardo DiCaprio and Kate Winslet, in James Cameron’s 1997 film Titanic.

After the ship struck an iceberg on the night of April 12, 1912, and the passengers had to evacuate the ship, the steward sought Roberta out.

He escorted her from her cabin to lifeboat number eight and made sure that she was safe.

As he did so he handed her the white star-shaped badge that was on his uniform to remember him by, as it tragically turned out.

Just like DiCaprio’s character Jack, the young steward died in the disaster.

She wrote: ‘An elderly officer, with tears streaming down his cheeks, helped us into one of the lifeboats. He was Captain Smith – the master of that ill-fated vessel. 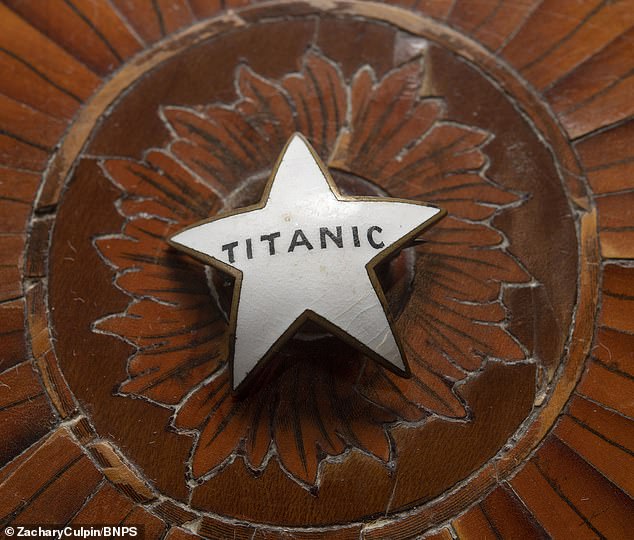 ‘As the lifeboat began to descend, I heard him say, ‘Goodbye, remember you are British’.’

Smith also died in the tragedy that happened 110 years ago.

Now the poignant brooch that Roberta kept for the rest of her life has emerged for sale at auction for £60,000.

There is also a rare piece of correspondence from the White Star Line First-Class Passenger Department dated April 18, 1912. It is addressed to Roberta’s mother Jane and it confirmed that her daughter had been rescued. It is also worth £5,000.

The letter would have been a huge relief to Mrs Maioni as Roberta’s name did not appear on any survivors’ lists because she was recorded under the name of her employer, the Countess of Rothes.

The archive is being sold by a private collector who bought it from descendants of Roberta over 20 years ago. 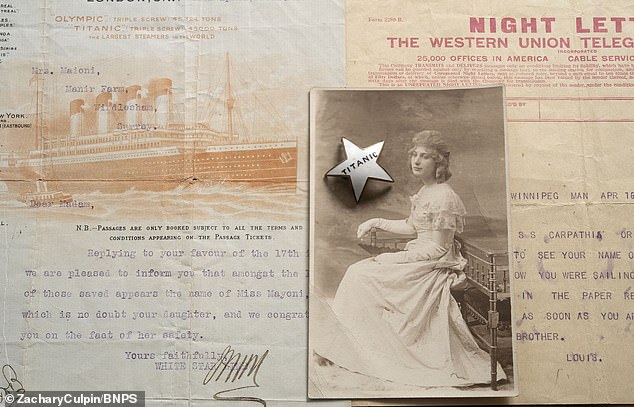 An archive related to Roberta is being sold by a private collector, with auctioneer Andrew Aldridge describing her brooch as an ‘incredibly poignant item’

It will go under the hammer with auctioneers Henry Aldridge and Son of Devizes, Wilts.

Auctioneer Andrew Aldridge said: ‘During her lifetime Roberta is said to have told her family about how she survived the Titanic and about the young cabin steward she met on board.

‘She is said to have fallen in love with him and he with her.

‘Although she never revealed his name to anyone – maybe because she was married by that time – she kept hold of this little brooch.

‘She told her family that the steward gave it to her, either as a token of love or something to remember him by as he probably realised his fate.

‘Either way, it is an incredibly poignant item and one that has a direct connection with the Titanic.’

Roberta boarded the Titanic at Southampton with the Countess of Rothes. 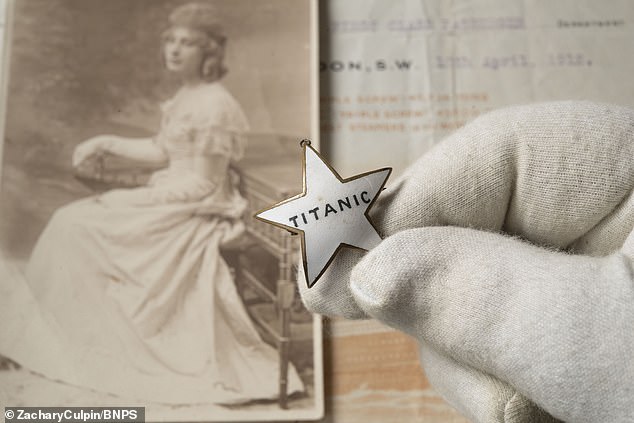 Her account of her time on board the liner included the near-miss collision the huge ship had with the smaller liner, the SS New York.

As it left Southampton, the water displacement made by the doomed ship sucked the New York towards it and led to Captain Smith to take evasive action.

In her account, Roberta recalled how when she was not on duty she spent her time exploring the ship and ‘making friends’, which could be a reference to the male steward.

On the night of the disaster, April 14, 1912, she wrote how she spent the night in the music salon before going to her cabin and being startled by the ship hitting the iceberg.

She said: ‘I was about to get up when a steward came and said, ‘Miss, we have struck an iceberg but I don’t think there’s any danger. Should there be, I’ll come back and let you know.

‘…in a few minutes the steward was back again, telling me not to be afraid but to dress quickly, put on my life belt and go on deck.’ 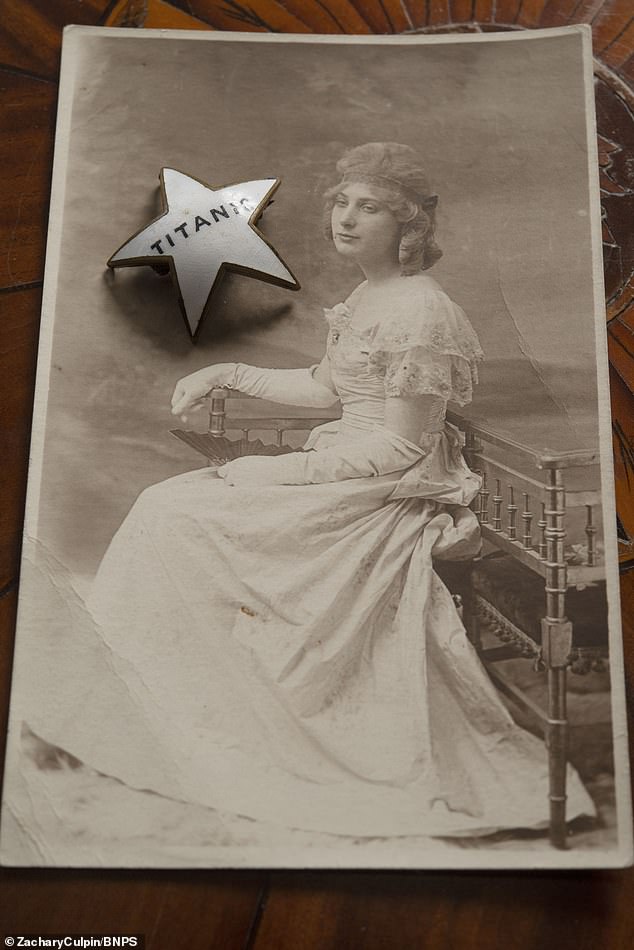 Roberta wrote about joking with the steward as he fixed her life jacket, before realising that something serious had happened

Roberta added that she struggled to get her life jacket on and the steward helped her.

She added: ‘Still realising nothing of the danger I was in, I joked with him about the funny way in which it was fixed. He did not answer but smiled very sadly and shook his head. Then I knew that something serious had happened.’

She recalled how there was ‘ice all over the deck’ and men and women ‘looking gaunt and fearful’.

She wrote how there were about 35 people in her lifeboat. When they were a safe distance they stopped rowing and watched as the Titanic began to sink.

She wrote: ‘Then I heard the terrible cries of the twelve hundred men, women and children left upon her. And then came an awful silence – more terrible than the sound that had gone before.’

Roberta and her employer were rescued by the RMS Carpathia several hours later.

She returned to Britain and married London business consultant Cunliffe Bolling in in 1919. He died in 1938 and she passed away in 1963, aged 71.

The archive relating to her has an overall estimate of £75,000 and will be old on April 23.