The photograph shows the Duchess looking directly into the lens of a camera. Wearing black to show her respects, including a face mask, her eyes speak volumes.

A body language expert analysed the snap, which she dubbed “historic”.

It certainly provides an intimate glimpse of Britain’s future queen, saying a sombre farewell to the husband of Elizabeth II, her grandfather-in-law.

Judi James told Express.co.uk: “As any photographer will tell you, an iconic image is often down to a mixture of planning and luck and that mantra would apply to this truly stunning and memorable photo of Kate taken at her father-in-law’s funeral.

“It’s a moment that defines something important and historic for our Royal Family but it is also a moment that is visually pleasing in terms of style, too.” 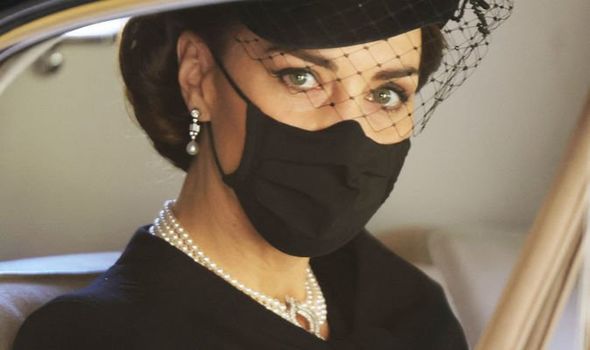 The expert claimed this was the perfect time for Kate to look more regal than ever, as Britons say goodbye to a man who represents a bye-gone era for the Royal Family.

She said: “With Prince Philip being laid to rest there was a feeling that an era of royal life was quickly vanishing with him.

“People were mourning a generation of royals that provided an image of something dashing and glamorous.

“The photos of the Queen and Philip in their younger days made that loss even more painful and with the Queen sitting isolated and vulnerable, overseeing a whole host of dramas and problems in the lives of the generations that will follow her, the feeling was that we would ‘never see their like again’.

“It was the perfect time for Kate to appear looking more regal than she has before: elegant, confident and very slightly aloof in a way that is in contrast to the laughing, often self-effacing woman we usually see with her husband and/or children, it was gratifying to see her car sweeping up to the entrance and this very calm, stunning woman sitting alone with nobody else to affect or dilute her body language signals.”

The expert suggested the image gave us an insight into Queen Catherine, and how she might be.

“If anyone was wondering what a future Queen Catherine might look like, this was the moment that appeared to show us, and there was never a better time to reassure fans in terms of the continuity of the crown.” 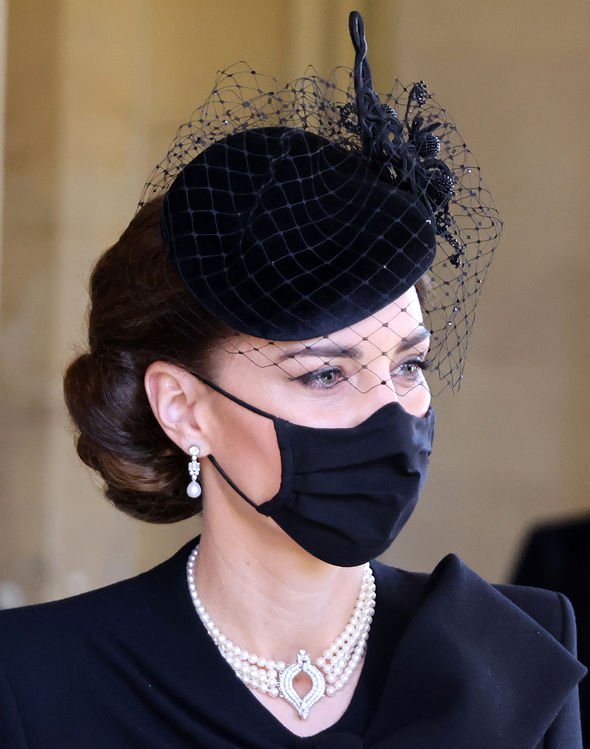 The Duchess’s appearance at the funeral caused discussion among fans for another reason too, her shoes.

Kate Middleton’s funeral shoes were a pair of skyscraper heels.

While wearing such high heels is impressive in itself, the mother-of-three wowed when she tackled a steep cobbled hill in Windsor wearing the shoes.

One fan asked: “How on earth did Kate manage to walk back uphill in those high heels?” 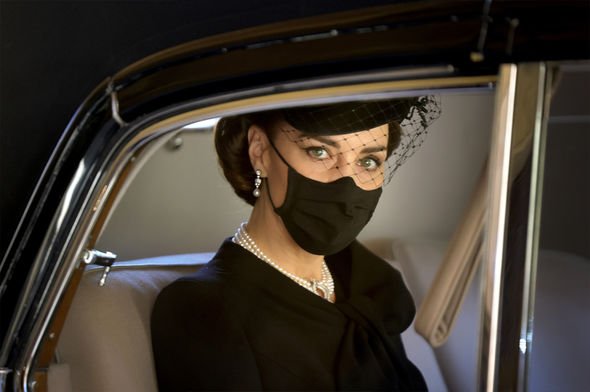 “Boy, those are really high heels,” one observed.

The Duchess was spotted with her children in Chelsea yesterday, according to one shopkeeper.

She said: “I’ve always been a Kate Middleton fan.

“Today she was in one of my stores on the King’s Road with George and Charlotte, what the team told me about how she was with them and how the kids were with each other makes me like her even more!”