The Grammys are finally here, and it’s the ultimate night to celebrate singers and songwriters, from their musical talents to their stylish red carpet looks. As per usual, one of the most talked-about celebs gracing the red carpet tonight was Cardi B, and always one with a flair of the dramatics, she did not disappoint. Cardi B’s 2019 Grammys dress was everything I needed and more.

Cardi B has a whopping five nominations at this year’s Grammy Awards, so it’s not like she had anything to prove with this look, but she still decided to deliver. The rapper is up for Best Album and Best Rap Album, Best Record for the song "I Like It," Best Rap Performance for song "Be Careful," and Best Pop Duo/Group Performance for the song "Girls Like You" by Maroon 5, on which she is featured. Yes girl, prove them haters wrong! And if I wasn’t already cheering for Cardi, I certainly was when I saw her hit the carpet. The star literally came through dripping in pearls from head to toe, in one of the most unique gowns I’ve ever seen.

Honestly, she was kinda serving fierce Ursula vibes, which I’m always here for: 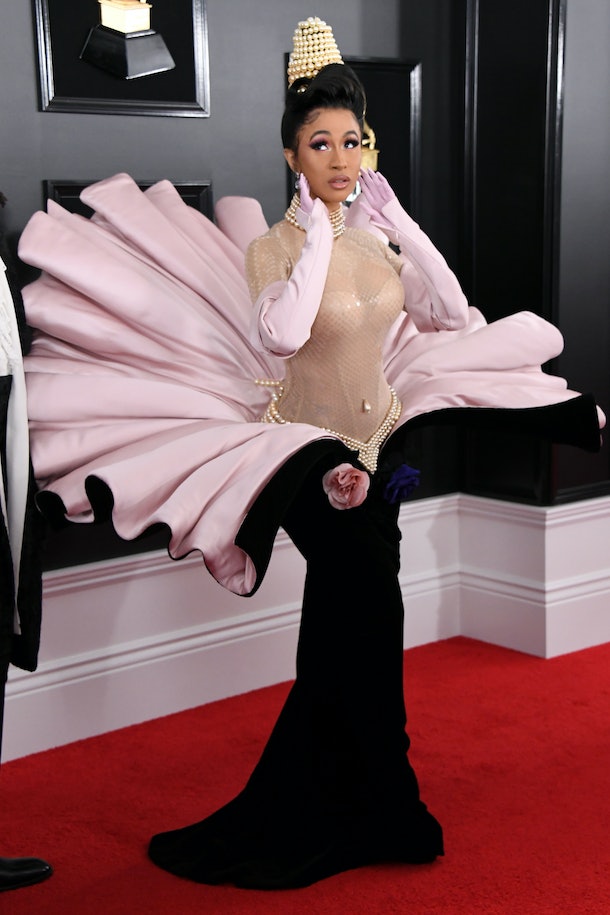 I love this bold look, but it’s a little hard to describe. It’s almost like she’s rocking a nude sequin bodysuit whilst blooming out of a black clam shell. With lots of pearls. And roses, too. Does that make sense? 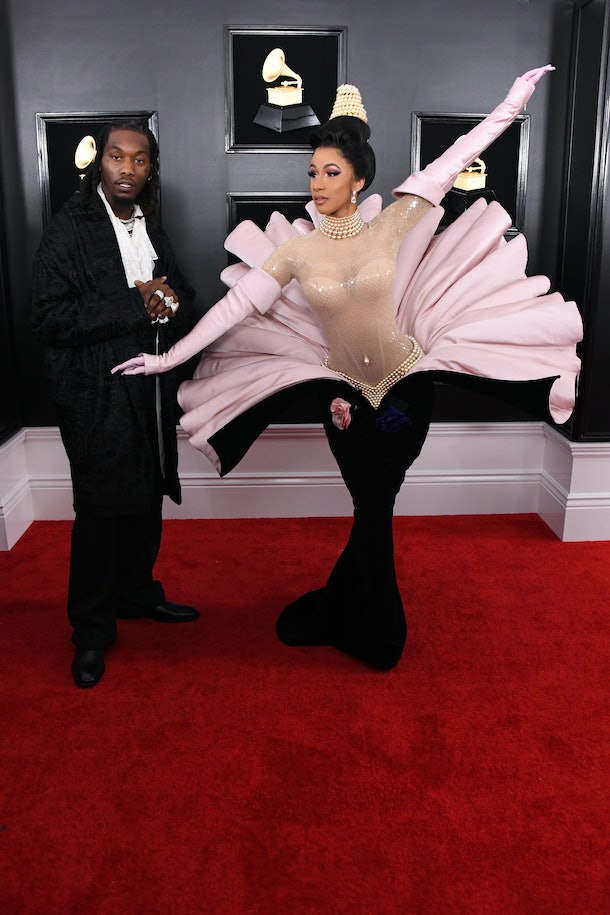 Cardi’s pinky eye lewk was done by Erika La’Pearl using Pat McGrath Labs products, and her hair, done by Tokyo Stylez using Suave Professionals, was done up in a beehive of pearls.

“The inspiration behind Cardi B’s red carpet look is a 90’s influenced pearl updo to play up her couture ensemble," said Stylez about the glam, and they really nailed it: 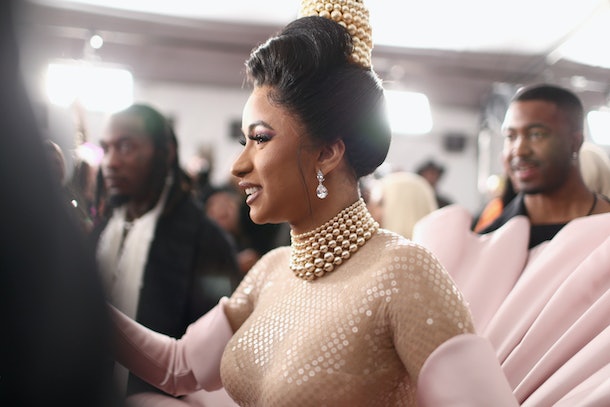 BTW, along with the pearls atop her head, around her neck, and belting her waist, there was even a pearl belly button ring-like embellishment sewn onto the bodysuit. I’m so here for this attention to detail.

The more pearls, the better! And pink gloves, too: 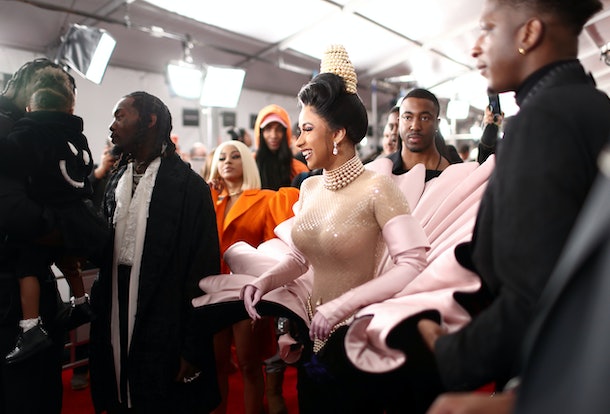 I mean, while I wouldn’t call this a red carpet-ready look, it’s a fire fit nonetheless: 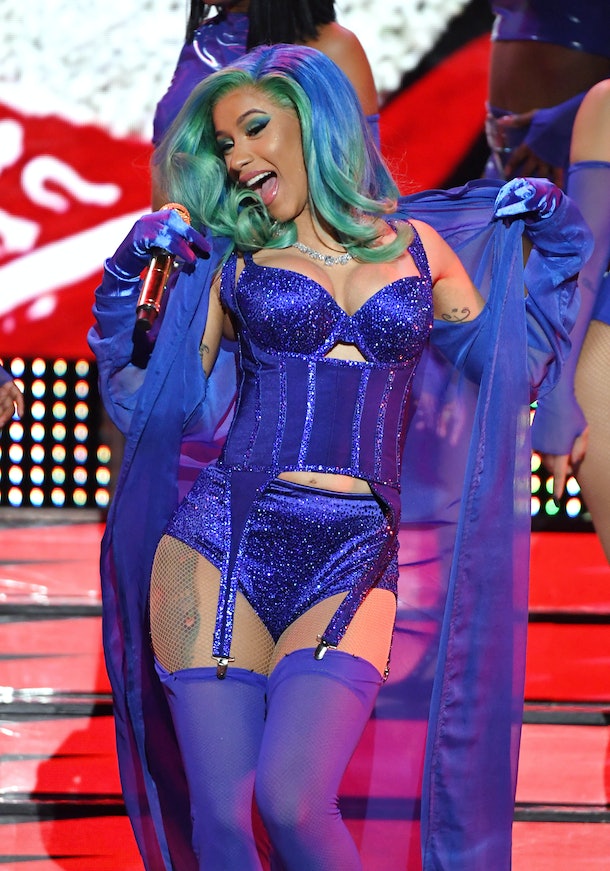 TBH, I guess my favorite looks happen whenever she matches her wig with her outfit: 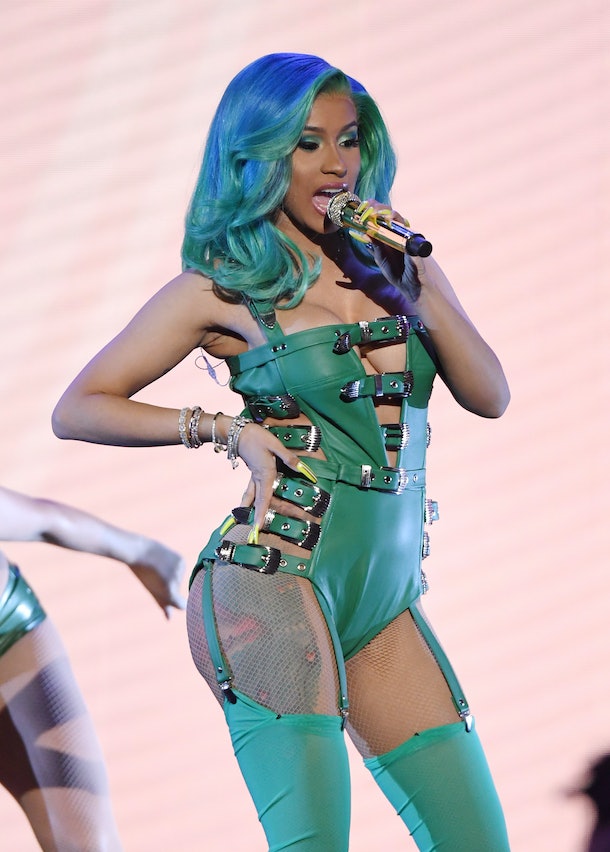 Of course, last year’s Grammy dress was certainly drool-worthy, too: 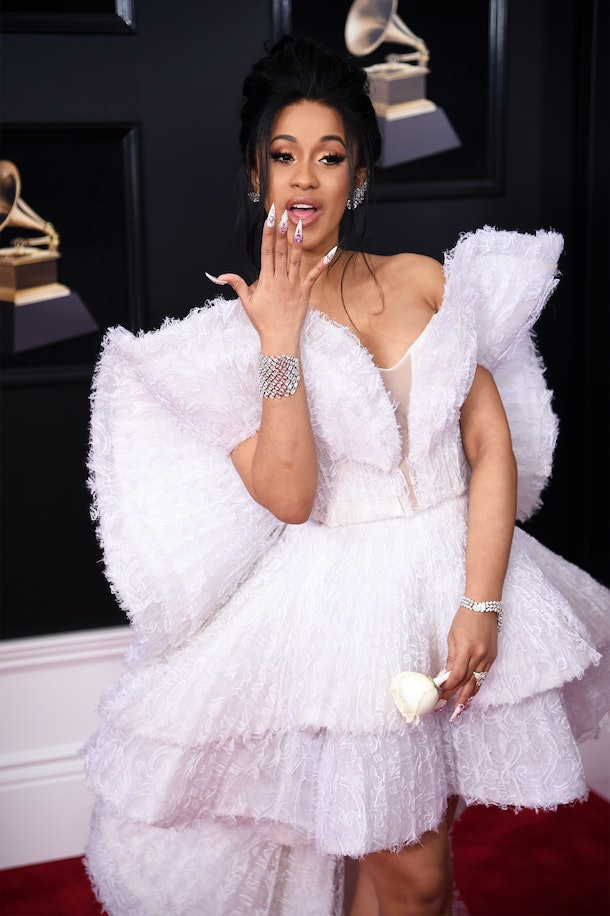 Cardi showed up to last year’s Grammy Awards ready to strut her stuff, win or lose, in an Ashi Studio dress that simultaneously served bad-bitch and swan-princess vibes. Iconic.

Of course, she also treated us to this color-blocked moment during her Grammys 2018 performance alongside Bruno Mars: 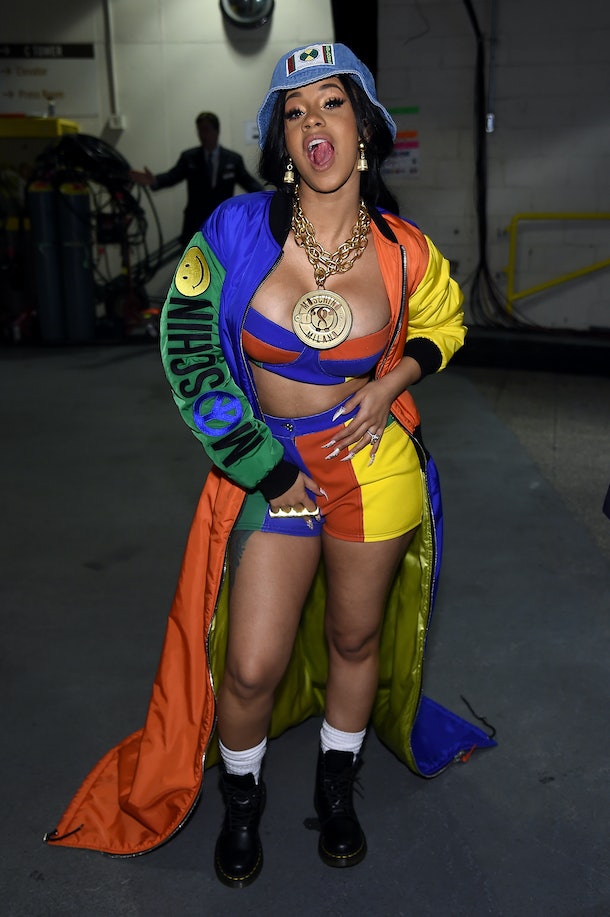 When it comes to fashion, Cardi B is a risk-taker if I’ve ever seen one — and more often than not, she really nails the look. Tonight was no different, and in fact, it just might hint at 2019 becoming Cardi’s best year yet. BTW, if pearls become a huge trend this year, we know who we saw them on first.