Never-before-seen case files, photographs and other records documenting the investigation into the infamous slayings of three civil rights workers in Mississippi are now open to the public for the first time, 57 years after their deaths. 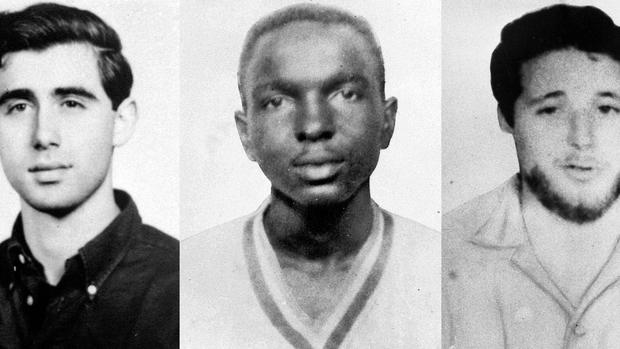 The records include case files, Federal Bureau of Investigation memoranda, research notes and federal informant reports and witness testimonies. There are also photographs of the exhumation of the victims’ bodies and subsequent autopsies, along with aerial photographs of the burial site, according to an announcement from the Mississippi Department of Archives and History.

The collection is being stored in three catalog records: Series 2870 houses the attorney general’s research files, Series 2902 houses the FBI memos and Series 2903 houses the photographs.

The three Freedom Summer workers, all in their 20s, had been investigating the burning of a black church near Philadelphia, Mississippi when they disappeared in June of 1964.

A deputy sheriff in Philadelphia had arrested them on a traffic charge, then released them after alerting a mob.

President Lyndon Johnson ordered the FBI to assist local law enforcement officers in the search for the missing men. Johnson’s aide Lee White told the president that there was no trace of the men and they had “disappeared from the face of the earth.” Civil rights colleagues worried they had been nabbed by the KKK. Mississippi’s then-governor claimed their disappearance was a hoax, and segregationist Sen. Jim Eastland told President Johnson it was a “publicity stunt.”

Finally, on August 4, 1964, their bodies were found buried on the secluded property of a Klansman. All three men had been shot at point blank range and Chaney had been badly beaten.

Nineteen men were indicted on federal charges in the 1967 case. Seven were convicted of violating the victims’ civil rights. None served more than six years.

In 2004, the Mississippi Attorney General’s office reopened the investigation. That led to the June 2005 conviction of Edgar Ray Killen, a 1960s Ku Klux Klan leader and Baptist minister, on manslaughter charges.

During his state trial in 2005, witnesses testified that on June 21, 1964, Killen went to Meridian to round up carloads of klansmen to ambush Schwerner, Chaney and Goodman, telling some of the klan members to bring plastic or rubber gloves. Witnesses said Killen then went to a Philadelphia funeral home as an alibi while the fatal attack occurred.