I recently returned from some lazy Sunday shopping to find my husband, Kris, pacing the house, a look of sheer panic in his eyes. ‘‘I just realised, it’s Book Week,’’ he muttered. ‘‘Do you know what that means? Only five costume-making days left!’’ 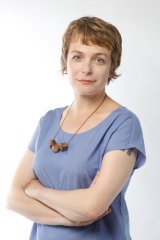 I tried to comfort him, to reassure him that, despite the odds, he always comes through in the end. Just think of last year’s magnificent Giving Tree costume. Admittedly it was virtually impossible for my daughter to walk in, but it was so convincing that my dog tried to relieve himself on it. ‘‘The Giving Tree was easy,’’ Kris replied, despairing. ‘‘Making a wearable castle, that’s hard.’’

Kris’ biggest problem is that he lets the children come up with their own costume ideas, indulging their dress-up fantasies in ways that I never would. I’m more of the ‘‘put a sheet over your head and say you’re Casper the Friendly Ghost’’ sort of parent.

This year, my daughter decided to dress up as Hogwarts Castle, a plan that had little to do with her devotion to Harry Potter, and a lot to do with the fact that she wanted to run around wearing a huge box. It was just that the box had to look exactly like a magical school for wizards.

I saw Kris’ face fall when the Hogwarts idea was mooted, and listened, as I do every year, as he tried to talk my daughter around to other, more practical possibilities. ‘‘Casper would be cool, don’t you think, darling?’’ Then, when his pleas for modesty were rejected, he returned to his other annual mantra. ‘‘Fine, it can be Hogwarts, but you’re going to have to do a lot of the work yourself, OK?’’ To which my daughter readily agreed, because she knew what would really happen. That she’d splash a bit of paint around, make a mess, then run off to play Minecraft, while he sat up until midnight, hand-crafting crenulated turrets.

Personally, I avoid taking any part in costume-making, but I do have my own way of indulging the kids, which is themed birthday cakes. Every year my children come up with outlandish suggestions for their cakes, and I bravely attempt to make them. We’ve had a Tardis, a Jabba the Hutt, and a Steve from Minecraft, just to name a few, all rendered in sponge and butter cream, along with a few carefully deployed wooden skewers to bolster structural integrity.

I always judge my cakes to be a success if the kids at the party refuse to eat them. That might sound counter-intuitive, but when a seven-year-old won’t eat a slab of sugar, butter and cream, you know they’ve suspended their disbelief to the extent that they are no longer seeing a slice of cake, but a chunk of Jabba, the giant slug.

As for my husband, I fear that he is being slowly worn down by Book Week, and the many other obligatory dress-up events that seem to form part of the modern calendar. And yet he persists, never lowering his standards. Which is ironic, considering how much he hates costuming himself. In fact, it was one of the things we bonded over when we first met; our mutual fear of adult dress-up parties, which were a discomfortingly common phenomenon in the early years of this century.

I suspect that Kris is driven by fond memories of his own mother making dress-ups for him and his brother. She died before our kids were born, and he can’t help dreaming of the costumes she might have made for them, if only she was here. And so he tries to live up to those imagined standards.

Did his mum also find it stressful, getting his costume right? Maybe, but of course he doesn’t remember that. He only recalls the joy he felt walking proudly in the Book Week parade. A lot like the moment when our own little Hogwarts Castle finally toddled off to school, her beaming face peeking out from an enormous castle-like box, as happy and proud as I’ve ever seen her.

My son started high school this year, and doesn’t do Book Week anymore. Kris declared it a huge relief, only having to make one outfit, but I wonder how he’ll react when my daughter finally moves up to high school, and Book Week costuming is done forever. Because like so much that you do as a parent, it’s a complete pain in the arse, until it’s over. Then it becomes another of those annoying, inconvenient moments that pass so quickly, and once gone, can never be regained.
@monicadux