The challenge is daunting. Sculpt the hunk of wood in front of me into a Christmas tree using the reverberating 13lb load. Without losing a limb, finger, or anything else, in the process of course. There are some final words of ­reassurance but they’re slightly ­difficult to decipher beneath the ear defenders stuck to my head. “Carry the weight in your frame and keep a steady hand, move your body in the direction you cut,” my female instructor says calmly. Fortunately, I’m in good hands. Griffon Ramsey, 39, is one of the most prominent faces of chainsaw carving, a fast-growing art form with a worldwide following.

Tree surgeons and loggers popularised the activity across North America in the Lumberjack World Championships during the 1980s.

In England, an open chainsaw ­carving competition has run annually in Cheshire since 2004 but it’s not a widely recognised art form – yet!

Griffon, a tattooed Texan, travels the world from Australia to Japan participating in competitions and live events demonstrating her art.

“Chainsaw carvers are like rock stars and I do feel that way,” she laughs. “We’re on the road, make a noise in front of a crowd and put on a show. I get a lot of enjoyment from it.”

The mum of one to Millicent, 14, is famous for her pop-culture recreations, including Elsa from Frozen and f­igures from the children’s book Where The Wild Things Are.

Today she has volunteered to show me the ropes and, with luck, prevent me sawing something off that should remain attached.

I unclip the safety lock before flicking the switch to on, twitching from the sudden roar of the chainsaw. 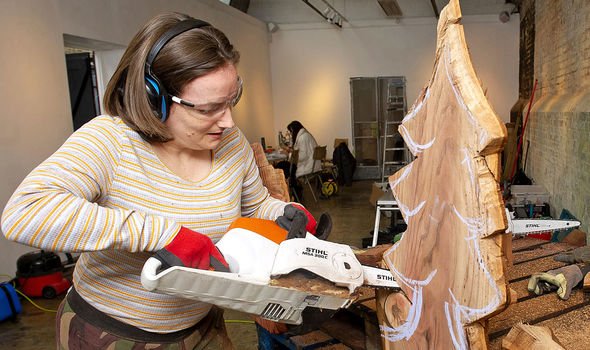 There is something about them that, in me at least, evokes a visceral fear. After all, they can be an instrument of death associated with horror movies like The Texas Chainsaw Massacre and gruesome, mostly fatal, accidents among DIY tree surgeons.

Ignoring these thoughts, I start ­slicing downwards at the top right-hand side of the tree. It takes a ­couple of attempts to finish the curve but before long I’m nudging a cut triangle out of place with the tool’s long point.

“That was so satisfying,” I say.

As one of the few women in the chainsaw carving industry, Griffon’s hipster credentials and beauty lend her an instant cool, making her the Madonna of the wood-carving world.

But she views her role as ­something bigger.

“My interest in pop culture has helped bridged this rustic traditional art form with enthusiastic ­people and an audience that may have never even thought of it,” she explains.

Her finished pieces can take up to three days to complete – perfect for her short attention span, she jokes – and an array of chainsaws, angle grinders and sanders achieve the perfect finish.

But one of the biggest thrills of chainsaw art is the spectacle of a show.

“I’m not much of an actor but I like public speaking and attention,” says the theatre graduate who started out designing sets and props.

“A lot of us in the chainsaw ­community feed off the energy of the crowd – it becomes sculpture but it’s part performance art.” 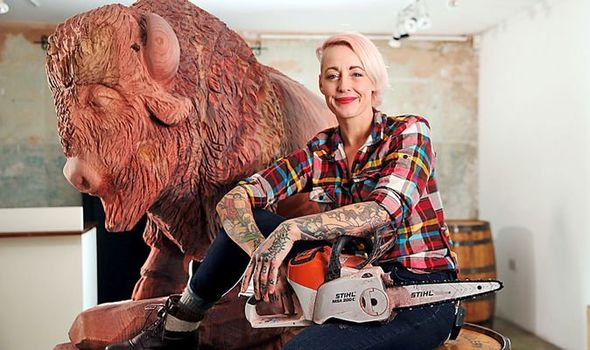 I can completely understand what she means, despite my modest audience of four. Each electric stroke produces a small adrenaline rush, as the wood chips fly, even when the saw snags and halts your progress. I am compelled to keep going despite the dull ache in my arms, not helped by the resistance in the wood’s grain. Several times the blade veers a little wildly as I try to force it through the whole block.

Despite being slightly left-field, Griffon believes the art form has potential to go mainstream.

“There’s lots of skill and hard work involved, not just talent,” she says.

It sounds like a lot but she believes her work is undervalued compared with other art forms.

“The people are fringe, self-­starting, brave and usually obsessed with travel,” she says.

“I really want to help elevate the art form so artists can be really respected for what they do and not thought of as a sideshow rural ­hayride type.” 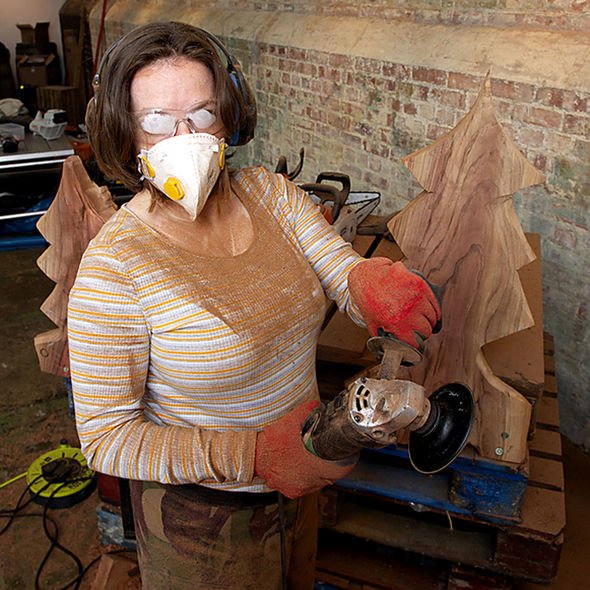 She tells me about a wooden pillar sculpture she recently encountered in Los Angeles’ downtown art district.

“It was terrible,” she lamented. “And overpriced. They were proud to display it but the people I know can make Michelangelo-level ­quality work in a day with a chainsaw.”

At the time of meeting, she has just spent 30 hours fashioning a six foot, two inch-high buffalo from red wood for US bourbon and whiskey distillers, Buffalo Trace.

Her toned arms are testament to her stamina during the three-day live exhibition at StolenSpace ­Gallery in Shoreditch, east London.

“It was an intense amount of work and I’m not the fastest carver but I’m getting quicker,” she admits.

“Back in the beginning that much work in this amount of time would have been absolutely impossible.”

Griffon has been doing this for eight years. Just half-an-hour into my own “career”, I have a new-found respect for her work ethic.

My Christmas tree design may be a less polished version than my mentor’s with its jagged edges and protruding chunks but it’s made me strangely proud.

But we’re not done. Next up is the small but potentially lethal disc-shaped angle grinder. “I don’t want to panic you but this is the tool welders usually hurt themselves with,” Griffon warns me.

This whirring piece of kit smooths edges and sands away imperfections, but a face mask is essential.

Within seconds a spray of wood chips and dust blanket my face, blessing me with an instant mahogany tan.

I wonder how participants cope with the long hours in extreme weather conditions.

“It can be annoying if it’s freezing cold or super hot but I would much rather be connected to nature, the weather and the world than sit in an office cubicle or some environment with artificial ­lighting,” she says. 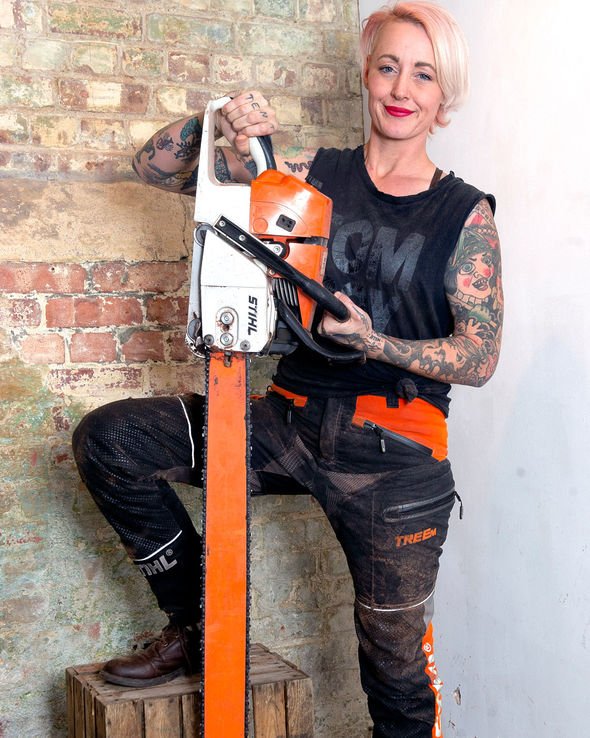 Coming from a logging family in Oregon, she was never destined for that.

“My grandfather would whittle things with knives so I was interested in wood carving as soon as I remember, although I didn’t have the patience for it,” she says.

“Any time he gave me a project I would just give up on it.”

She encountered chainsaw carving as a child after seeing her first carved totem pole at an event.

A perfectionist by nature, she now has to contend with the additional pressure brought by her ­burgeoning fame.

“I do worry about that sometimes,” she admits.

“It’s not like I walk away from a carving and I never see it again. It could be out there.”

Sanding done, I apply the ­baubles to my finished tree with a scary-­sounding rotating blade called the die grinder.

Thankfully it’s the easiest part so far and I’m thrilled with my creation.

“You were my test run,” Griffon confides afterwards, explaining her plan is to run chainsaw art ­workshops for women.

She says her most favourite moments are watching the mothers and daughters whose eyes flash up at her shows.

And if I was standing there with them, I’d tell them the same thing as well.