Doctors and pharmacists are having to delay or even cancel coronavirus vaccine appointments for children aged five to 11 despite the federal government saying there is an abundance of doses available.

The delays came as the Victorian government, which is to launch its state-run child vaccination program on Monday, said it was “working towards school resuming” as scheduled from January 28 (January 31 in government schools). 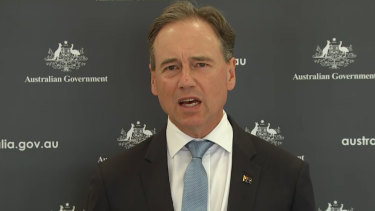 And Premier Daniel Andrews, who returned to work on Sunday, has extended Victoria’s pandemic declaration for another three months after the state recorded another 44,155 coronavirus cases and four deaths.

The spread of the Omicron strain – over 80 per cent of new cases in Victoria are now Omicron infections – has increased pressure on all levels of governments to vaccinate as many people as possible, including those in the five-to-11 age group. Children must get vaccinated as soon as possible if they are to have any immunity to COVID-19 when school returns.

He said that while the state vaccination hubs were reportedly ready to go ahead with the five-to-11-year-old rollout, there were major logistical hurdles to overcome for GP clinics.

The Royal Australian College of General Practitioners also told The Age that deliveries of child vaccines had been “unreliable”.

But federal Health Minister Greg Hunt said on Sunday that there was ample supply of vaccines for children, who will start getting vaccinated from Monday across the country at 8000 GPs, pharmacists and state-run clinics.

Over the course of January there would be ample slots for children to get a jab, he said.

Mr Hunt said there were 2 million doses available for children aged five to 11 in the next fortnight, and another million doses would become available by the end of January. There are 2.3 million children eligible for vaccinations in that age group.

“It’s enough to ensure that every child has the opportunity to be vaccinated,” he said.

Jeroen Weimar, Victoria’s COVID response commander, said on Sunday that he was “not aware of any significant supply constraints” in GP and pharmacy-run vaccination clinics.

But professional medical groups have strongly disputed the rollout is proceeding as smoothly as suggested by state and federal authorities.

The lack of supply has led GP clinics to offer only a limited number of vaccination appointments, and some have cancelled those appointments that could no longer be completed.

“It’s a systemic issue,” said Anita Munoz, chair of the Royal Australian College of General Practitioners. “GP practices have not been receiving the deliveries that are expected and each delivery has been providing really underwhelming numbers of doses.”

Ms Munoz said some practices had received only 100 doses a week, which might last two days for an average-size operation.

“We have been told enough supply has arrived in the country, so this is really about logistics and distribution [at the federal level].”

A spokesperson for the Pharmacy Guild of Australia said Victorian pharmacies were in “much the same position as GPs”.

“Some have stock of five-to-11-year-old vaccines but those that don’t may be holding off taking bookings until they do.”

A spokesperson for the federal Health Department said there was an abundance of paediatric vaccines available.

“There are more than enough COVID-19 vaccines in the country to ensure all children aged five to 11 can receive a first dose before the end of January,” the spokesperson said.

“Operation COVID Shield advises all orders are on track to be delivered as scheduled and advised to providers once the orders had been placed. No provider should be cancelling appointments.”

The push to vaccinate as many children as possible is closely linked to the ability of states to return young people to schools as scheduled, in public education, from January 31.

“We are working towards school resuming,” acting Premier Jacinta Allan said on Sunday. Asked what would lead to school not returning at the end of January, Ms Allan said she was “reluctant to speculate”.

“Our focus here in Victoria … is a return-to-school plan, which vaccination is a part of,” she said.

NSW will open public schools on the first day of term this year, despite concerns that rapidly rising Omicron cases will force many teachers to take sick leave.

Queensland announced on Sunday that schools would remain closed to most students for an extra two weeks while the state manages a peak in Omicron cases it expects later in January.

Dr McRae, from AMA Victoria, said the education system was sort of pretending it’s business as usual. He said the Victorian government urgently needed to make clear what would happen in its schools. “People need to have the element of certainty.”