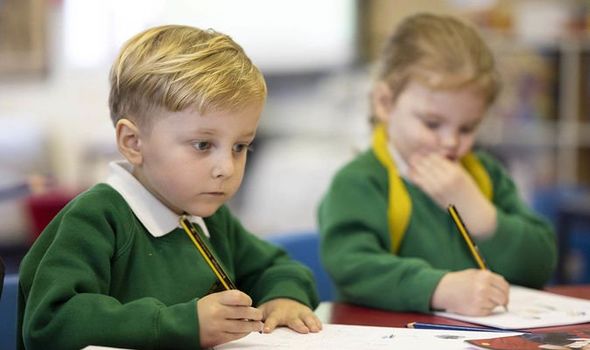 They’d also like to see an increase in the number people opting to travel by trampoline and by jetpack. The introduction of giant zip wires allowing people to get from A to B without using fossil fuels was also advocated, as was a requirement everyone with a garden have at least three trees in their backyard.

The pupils provided their insights ahead of the launch of National Grid’s Voices for a Green Future competition, which calls on kids to say in 200 words how they’d tackle climate change if they were in charge.

The winners will have the chance to put their suggestions to world leaders at the 26th United Nations Climate Change Conference (COP26) in November via a pre-recorded video.

It was launched after a study commissioned by National Grid of 1,500 children aged seven-16 found 80 percent believe it’s their responsibility to save the planet.

While 62 percent said climate change is one of the aspects of everyday life they feel most passionate about.

More than half (52 percent) have been inspired by Sir David Attenborough – naming him their top “climate change hero” ahead of Greta Thunberg (30 percent) and Chris Packham (27 percent).

David Wright, the Chief Engineer of National Grid and one of the judges of the competition said:  “Climate change impacts us all, but it is our children’s futures that will be most affected by the decisions we make today so it’s vital that their voices are heard.

“They have a strong understanding of the causes of climate change such as the fuel we put into our cars or the type of energy we use to heat our homes and schools.

“And as National Grid is at the centre of efforts to get Great Britain to net zero, I’m excited to hear from young people all over the country – they have inspiring ideas and they really can be the energy problem-solvers of tomorrow.”

In addition to asking the children at Primrose Lane Primary School in Boston Spa, Leeds, what they think, the poll also found out what kids from all over the UK they feel about climate change.

Around nine in 10 (85 percent) said they’re worried about the future of the planet – in fact, 31 percent have even had nightmares about it.

While two thirds (62 percent) fear it will be too late to stop climate change by the time they’ve grown-up.

As a result, 83 percent of children think grown-ups need to do more to help protect the planet – which might explain why 49 percent of youngsters have scorned their parents for their “un-green” ways.

And why a quarter (25 percent) would like to see schools up their game when it comes to being more sustainable.

Almost half (46 percent) would like to see their educational institution recycling more, while 41 percent think electric school buses should be use and 39 percent want to see more trees and flowers in school grounds.

Encouragingly though, more than half of kids think by being eco-friendly they can make a difference themselves – suggesting they think everyone has a role to play.

Looking to the future, those polled believe they will be better at switching lights off (49 percent) than adults are currently – they will also recycle more (53 percent) and use less plastic (50 percent).

Carried out through OnePoll, the study also found kids are confident they’ll tend to walk or cycle to places rather than drive (37 percent) and if they do drive, it will be in an electric car (35 percent).

Alok Sharma, COP26 President, said: “The role of young people in tackling climate change, one of the greatest challenges of our generation, will be crucial.

“It requires action from each of us on an individual and collective basis and I’m keen to hear from young people across the country, through National Grid’s Voices for a Green Future competition.

“I want them to raise their voices so that their interests are heard loud and clear at COP26.”

• A ban on homework because it uses too much paper

• Running cars on “special” chocolate instead of petrol

• An increase in the number people opting to travel by trampoline