China’s top diplomat in Canberra is leaving the country after a tumultuous period in diplomatic relations during which he threatened consumer and tourism boycotts against Australia. 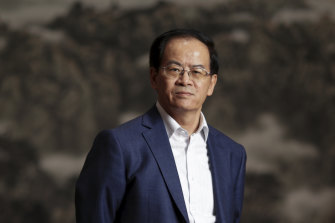 Mr Cheng has been in the role for five years, taking up the post in 2016 when relations between the two countries began to deteriorate.

He warned the federal government last year that its pursuit of an independent global inquiry into the COVID-19 pandemic could spark a Chinese consumer boycott of students and tourists visiting Australia as well as of lucrative exports including beef and wine.

Beijing then imposed more than $20 billion of trade strikes on Australia including on beef, wine, lobsters and barley.

In April, Mr Cheng held a bizarre two-hour press conference at his Canberra residence where senior Chinese officials and Uighurs were beamed in from the far-west province of Xinjiang to argue the rising criticism of China’s re-education camps were based on “Western lies”, “fabrications” and “anti-China forces”. He told the Australian government to stop criticising the country over human rights abuses of the Muslim minority group in Xinjiang, saying nations should know Beijing would respond to any meddling in its internal affairs.

Senator Payne said on Thursday Mr Cheng was “about to depart, if he has not already departed”.

“I spoke to the Chinese ambassador some time ago now, my office spoke to him last week prior to his imminent departure,” she said.

Richard McGregor, a senior fellow at the Lowy Institute, said Mr Cheng was “not a natural wolf warrior” in the mould of China’s new breed of diplomats such as Foreign Ministry spokesman Zhao Lijian.

“He’s very much of the Foreign Ministry bureaucracy and I think his time here pretty much reflected that,” he said. “Once he had to get his hands dirty and issue veiled threats to Australia about the cost of crossing China he was willing to do it. But he was not a natural to that role which a lot of the new breed in the Foreign Ministry are.

“China is not going to invest much in rebuilding the relationship because I think, like Australia, they think there is little hope for improvement in the near term.”

Justin Hayhurst, deputy secretary with the Department of Foreign Affairs and Trade, said Australia considered “the risk of miscalculation higher than it was. There’s more activity, more pressure – so we are concerned”.

“We have made our concerns known about this to China,” he said.