Chloe Shorten has spent five years interviewing for a job that’s almost entirely undefined. The wife of Australia’s potential next prime minister acknowledges her curious situation with a laugh, and quickly checks her phone for messages. While a believer in some occasional unplugging, she thanks technology for making her family’s virtual togetherness possible, even when it’s physically not.

“With Bill’s constant travel we have to do every possible app, every piece of technology,” says Ms Shorten. “It can get a bit embarrassing because he might FaceTime me in my trackies, putting a child to sleep and ‘Bing! Hello?’ – Bill is there with his colleagues, all dressed in their suits.” 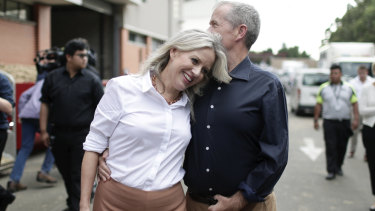 Opposition Leader Bill Shorten and Chloe Shorten during their visit to the Royal Easter Show in Sydney, on Saturday 13 April 2019. Credit:Alex Ellinghausen

“I’ve been introduced to a few people when I am seriously not quite ready, thank you very much.” I raise my eyebrows, wondering who Shorten might be referring to. “Jacinda Ardern,” she admits with a part-grin, part-grimace, recalling her initial introduction to the Prime Minister of New Zealand.

When we meet at a coffee shop near her Moonee Ponds home, Ms Shorten is readying herself for an election campaign. Rather shy and understandably wary of the media, this will be her only interview ahead of the May 18 poll.

Chaotic schedules that change by the hour, plans dictated by marginal seat polling, anticipated attacks from the other side and magnifying glass-like media scrutiny await her. Political fortune-tellers predict that Bill Shorten will be Australia’s 31st prime minister, representing a world-changing shift for their family.

One of the suburb’s young mums rushes in for a much-needed second caffeine hit of the day. She waves cheerily to her friend, Chloe, and asks how the wife to the possible next-leader of the nation is doing. “We’re vertical!” is the wry reply.

Community matters to Ms Shorten, who, like her husband, doesn’t underestimate the power of local. She seems to know everyone who wanders in and out the jangling doors. “This coffee shop has been great for the area,” she tells me wistfully. “It’s given everyone somewhere to come together. I love it here.”

Silence settles around what’s left unsaid in that statement. Ms Shorten believes in her husband’s vision for the country but government would also enormously disrupt her young family and the community of support she and Bill have built around them. Tradition dictates that the couple would relocate to The Lodge in Canberra before the end of financial year.

A victim of the brutality of politics in the early days, it took a toll … Shorten was baffled by the unkindness of the Canberra bubble.

When I press her about the future, Ms Shorten is polite and tight lipped. “I keep myself as firmly planted in the now and in the day and in the moment as I can,” she explains. “It means not looking back too much and worrying about what’s gone before and not extrapolating myself into the future. Not buying into the inevitability of where my life is going and not explaining to people what my life might look like in the future when I do not even know myself.” 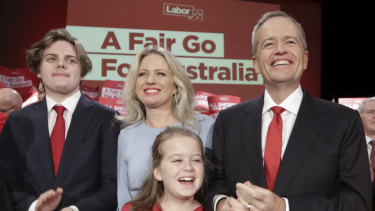 The Shortens at the Federal Election Volunteer Rally in Burwood, NSW (with son, Rupert and daughter, Clementine).Credit:Alex Ellinghausen

Refusing to get ahead of herself is how Ms Shorten keeps herself grounded through the uncertainty of political life. A victim of the brutality of politics in the early days, it took a toll on her, baffled by the unkindness of the so-called Canberra bubble.

Insulating her children from the muck and fiercely defending their right to privacy has been a priority for the family. During the election campaign Ms Shorten is determined her kids keep doing all their normal stuff, focusing on school and friends and sport, not caught up in speculation or spotlight.

“There is no case study for living in the huge era of technological change, social media, public life and politics… Part of the strategy is telling the kids, ‘This is what happened today, and this is how we’re going to handle what happened today’,” she says. “I keep routines and rituals going. The resilience you can build into so many parts of life, particularly when there are periods of stress, is to lean back on the mattress of ritual. I do that for myself too. There is some self-parenting that goes on,” she muses.

She draws parallels between her own experience and the daily challenges of other Australian women with families.

“I am in exactly the same space as some of my friends who are defence wives or are in shift work and in a nurse/doctor partnership. It’s the same thing. We’re all bound together by this unpredictability and being unable to have your year planned out, or your term, or even a week at school,” she says. “There are so many things in my head that come from – not just mum – but both my parents.”

Her mother, Dame Quentin Bryce, is a former lawyer and famously served as Australia’s first and only woman Governor-General. Her father, Michael Bryce, is an architect and designer. Together they raised five children in what sounds like a thoroughly modern and equal parenting partnership, particularly for the times.

“A lot of people don’t realise the enormous fuel that my dad was for my mum in her career,” Ms Shorten says. “Women live their lives doing all this extra stuff, this constant seam of activity and emotional labour that my parents told me you had to take turns at… While we’ve made strides with the women’s movement, we haven’t really evolved that taking turns bit; the low-level hum of emotional activity that goes through every day. Mum and dad taught me to try and do that well and do it together.”

While we’ve made strides with the women’s movement, we haven’t really evolved that taking turns bit.

Despite being a self-described reluctant player in the political process, Ms Shorten is an accomplished former media consultant and journalist with an enormous amount to contribute. She’s poised to inherit a potentially significant national platform. One that could be used to achieve charitable and policy outcomes she’s passionate about, if she chooses to harness it in that way.

There’s been no real consistency in the attention and influences wielded by the "first spouse" of Australian politics. Historically, Andrew Fisher’s wife, Margaret, was the first to take a politically active role, participating in suffrage rallies and the like. Enid Lyons went a step further in 1939, running for parliament herself after her husband died. Margaret Whitlam was a university-educated thinker like her husband, and actively contributed to the national conversation.

More recently, businesswoman Therese Rein had to pull back considerably from her commercial work when Kevin Rudd became prime minister. Lucy Turnbull appeared regularly at her husband’s side and Malcolm Turnbull says her personal influence on his work was vast. Jenny Morrison and Margie Abbott have seemed more hesitant to engage publicly and remained focused on their families while giving the occasional interview for a magazine profile piece.

Ms Shorten says she is more comfortable behind the scenes, although the unabashed feminist speaks with contagious enthusiasm about issues facing Australian women and the urgent need for change. But she is acutely aware of potentially being handed a megaphone, and intends to use it for the betterment of Australian women.

She cites the fundamental right of women to live free from violence as her number one policy priority. “I think that I will always bang on about the things that are very unjust for women because they are still there,” she says. “I have two daughters and I want my son to become a man for others. That means seeing things through a different lens to a generation ago."

Jamila Rizvi is Future Women’s editor at large and a former adviser to the Rudd and Gillard Governments. This article first appeared on Future Women, a club connecting women through community, events and journalism. You can join here.