A new tip is dividing the cleaning-enthusiasts of the world over whether or not you should pour fabric softener in your toilets.

Sadie’s Professional Cleaning Services, a cleaning company from Connecticut initially shared the hack on Instagram, claiming the softener will make each flush smell ‘amazing,’ if poured in the tank.

It also claimed the trick would not cause any damage, and it quickly went viral across several social platforms.

Before long, the made it on to the UK-based Facebook group Mrs Hinch Made Me Do It, where it both fascinated and divided fans, with many arguing that the detergent would clog the pipes over time. 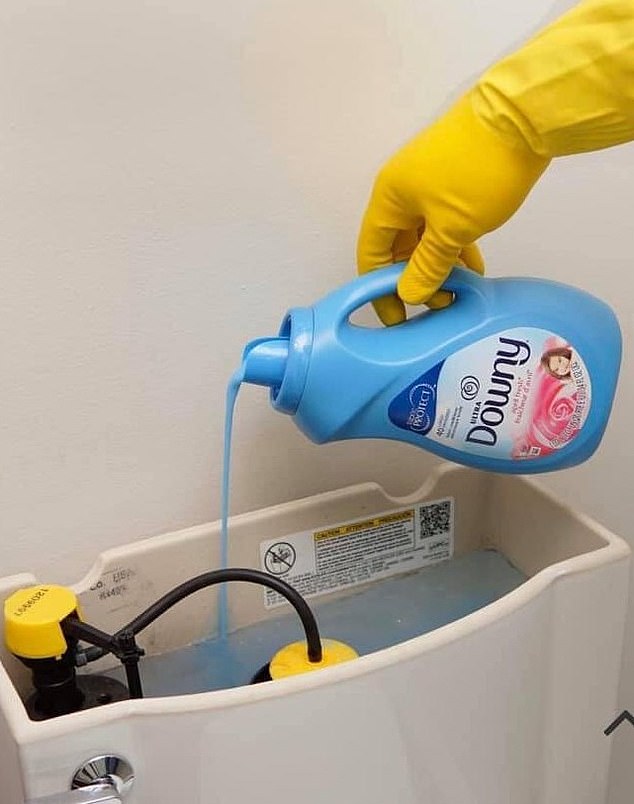 A cleaning company from Connecticut claimed pouring a cup of laundry detergent in your toilet tank would leave an amazing smell at each flush, but UK cleaning-fans were not convinced

Once the laundry detergent is in the tank, it will be released into the toilet bowl when flushed, which will spread the smell around the room, according to the hack.

‘I do it and mine’s always be fine,’ said a convert.

‘Wonderful tip, thank you,’ said another.

But while some seemed enthusiastic, not everyone bought into the craze, with many saying the hack could actually have terrible consequences in the long term.

Some were just not convinced by the tip, saying it would lead to damage and unwanted costs once it’ll have clogged the toilet

‘Yes, and completely muck up the toilet system. No I would NOT recommend this,’ wrote one.

‘Good lord. Just use the products that are designed for these things,’ another added.

‘Fabric softener can coagulate and block your washing machine, I dread to think of the repair bill when you’ve used this so much it’s blocked your toilet system too, why bother?’ a commenter agreed. 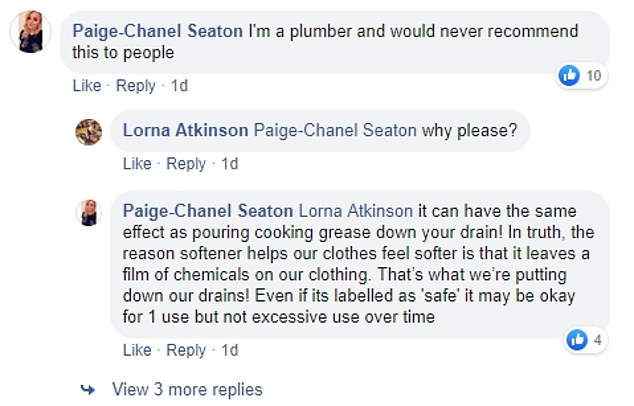 ‘Why on earth would you want your loo smelling of fabric softener? It’s horrible,’ said one.

‘I’ll stick to my freshers that clip to toilet thanks. Softener leaves a slimey film so will most likely in the long run clog up your cistern with gunk,’ said another.

One member of the group who happened to be a plumber explained why moderation was advised when using detergent in toilet tanks:

‘It can have the same effect as pouring cooking grease down your drain! In truth, the reason softener helps our clothes feel softer is that it leaves a film of chemicals on our clothing. That’s what we’re putting down our drains! Even if its labelled as ‘safe’ it may be okay for one use, but not excessive use over time,’ she said.