A woman wasn’t happy when her husband was invited to a stag do.

Fearing that her hubby would be up to mischief on the big day, the Facebook user compiled him a list of strict rules to stick to.

As well as banning cigarettes, strippers and alcohol, the lass demanded to track her partner’s phone.

Unsurprisingly, these demands didn’t go down well with her friends and family.

The woman took to Facebook to outline rules for her partner’s stag do.

She wrote: “Hubby has been invited to a bachelor party, I’m more than happy for him to go, but we are all Christians so I was thinking of writing a list of rules for all the men to follow.

“Let me know if I’ve missed something.”

2. No cigarettes (hubby quit so I don’t want the temptation)

4. No strippers/dancers/women at all (a lot of these men are already married)

5. No fast cars/taxis only

6. All phones need to be tracked at all times

8. Everyone home by midnight

9. No hurting each other (including play wrestling) 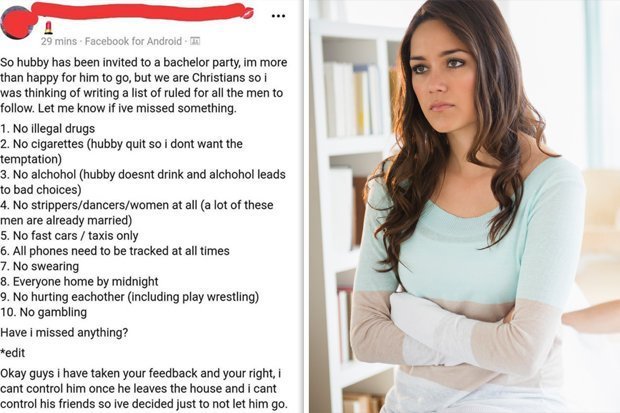 Commenters were horrified by the woman’s “controlling” behaviour.

One responder wrote: “They say love is blind but this woman appears pretty paranoid about letting hubby out of her sight.”

Another said: “I don’t think this relationship is healthy.”

A third joked: “I’d make every attempt to go to federal prison so I could get a little more freedom.

“Heard North Korea is nice this time of year.”

And it seems that the response has led to the woman having second thoughts about the stag do.

In a Facebook update, she wrote: “Okay guys I have taken your feedback and you’re right.