A couple who lost 15 stone between them after being mortified by a photo of them dressed as Tweedledum and Tweedledee have revealed how their transformation has reignited the spark in their relationship.

When Becky Ember, 47, from Southampton, Hampshire, met her now-husband, David, 50, in 2005, they bonded over their love of football and partying.

David would guzzle up to 15 pints on a night out, and saw his weight soar to 21st 7lb, while he needed clothing size XXXL.

Becky would happily drink ‘a dozen or so’ Smirnoff Ice alcopops before finishing the evening with an extra-large kebab and chips, and at her heaviest wore a size 26 and weighed 18st 6lbs.

But, after logging into Facebook in January 2019, and spotting an unflattering throwback snap of them at a fancy dress party, they vowed to change for good, and have since shed 15 stone between them. 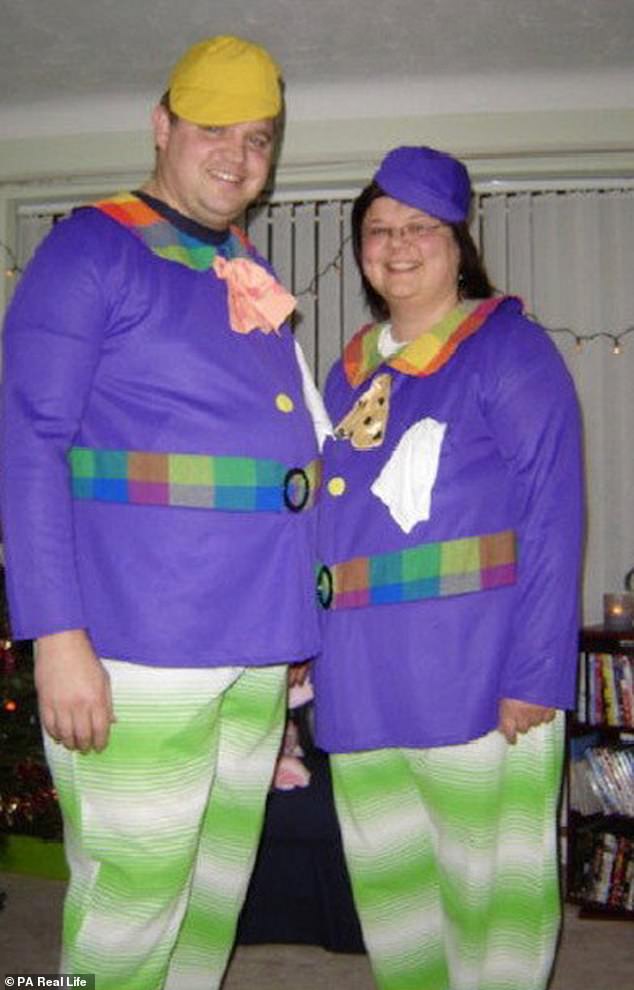 Becky Ember, 47, and husband David, 50, (both pictured) vowed to lose weight after spotting an unflattering throwback snap of them at a fancy dress party, 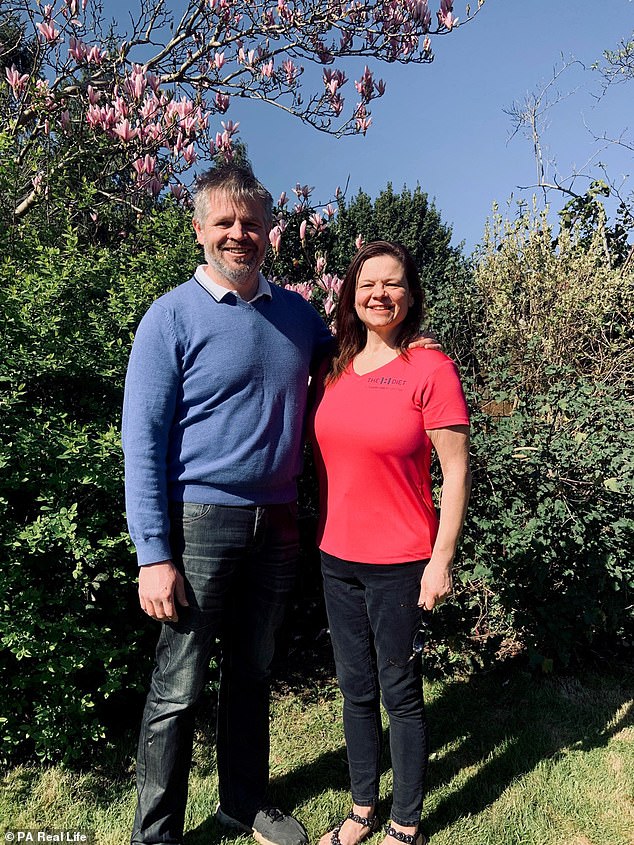 The couple have since shed 15 stone between them after tipping the scales at a combined 40 stone. They are pictured after their transformation

Becky, who is now a 10st 6lb size 12, while her groundskeeper husband is a 14st 10lb size XL, told how the pair would go for ‘long countryside walks’ before the coronavirus lock-down, and switched to eating healthy, balanced meals daily.

Becky said: ‘It’s definitely brought the spark back. Sometimes I look at him and think, “Oh my God, he’s fit”. He has such a peachy bum now.

‘We fell in love with each other for who each other was – but now we’ve got the added bonus of getting 100 per cent fitter.’

When the pair first met, they tipped  the scales at 34 stone between them, and continued to pile on the pounds in the years that followed.

Becky is now a 10st 6lb size 12 after previously tipping the scales at an 18st 6lb size 26. She is pictured before and after her weight loss

The pair first met after being invited to a regular meet up for Southampton F.C. supporters, and she admitted they didn’t exactly hit it off.

‘We were introduced over a pint,’ she recalled. ‘He thought I was stuck up and I thought he was miserable.

‘It took a few weeks before he realised I was a just bit aloof, and I realised he had just been hungover.’

From there, the pair would catch up every fortnight at the supporters meet up before watching their team play, and also began exchanging regular texts and phone calls.

Then, when Becky was given a devastating lung cancer diagnosis in June 2005 after flagging a persistent cough and breathlessness during a check-up through her private medical insurance, she found herself turning to David for support. 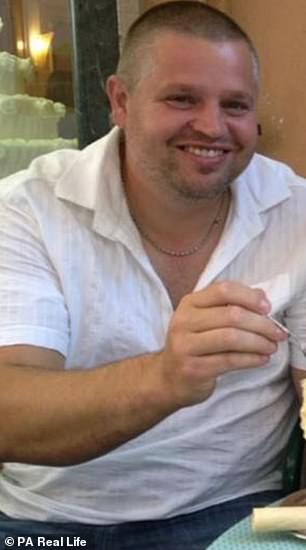 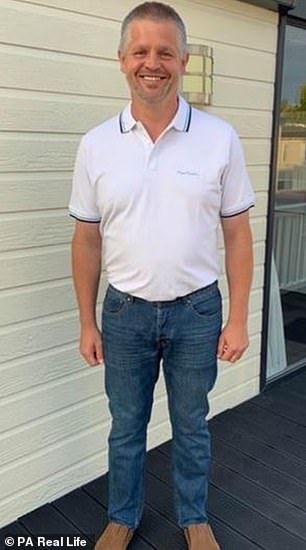 David was 21st 7lb and wore size XXXL clothing. He now weighs 14st 10lb and is a size XL. He is pictured before and after his weight loss 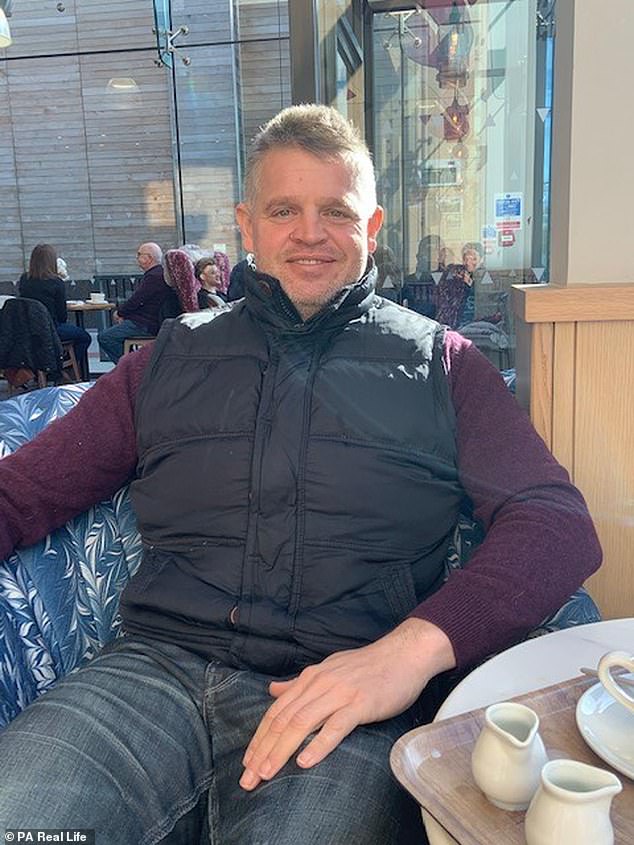 Becky says David’s weight loss has ‘definitely brought the spark back’. He is pictured after his seven stone weight loss

She added: ‘They told me there was a tumour in my right lung. I found myself relying on David more than I could have expected, even though we weren’t even official at the time.’

In June 2005, Becky, who has never smoked, making her diagnosis all the more shocking, underwent a lobectomy, where part of on her upper right lung was removed, at Spire Southampton Hospital.

Throughout her 10-day hospital stay, David was a regular visitor.

‘He came to visit me every day, and that’s when I realised he was special,’ she said. ‘So many men would have run for the hills.’

Luckily, the surgery was a success and Becky did not require any further treatment, but had annual check-ups until being given the all clear in 2015.

Making things official with David in November 2005, just four months later, keen to put her cancer ordeal behind her, Becky was delighted when the couple moved in together.

Becky and David’s diet: Before and after

But they soon fell into an unhealthy pattern, often enjoying a pre-match fry up before watching football together, washed down with several pints.

‘The foundation of our relationship was based on unhealthy habits,’ Becky said.

‘Because we’d already bonded over football, we fell for each other’s personalities and not what we looked like – so we just didn’t care about the weight.’

Spending the first four years of their relationship ‘doing nothing more than eating and drinking,’ Becky and David would paint the town red every weekend.

Then, in November 2009, they welcomed their first child, Darcey, and though they curbed their party lifestyle, they soon swapped one vice for another.

Instead of nights in the local pub, they began splurging on fast food, eating takeaways five times a week and consuming an estimated 8,000 calories between them a day – far more than the recommended intake by the NHS of 2,500 for men and 2,000 for women.

Becky said: ‘We swapped nights out on the town for date nights in front of the telly. We would basically live off takeaways. Chinese, Indian, kebab, pizza – we really weren’t fussy.’

Following the 1.1 plan, kick starting their day with porridge, followed by a 1:1 Diet product for lunch and grilled fish and steamed vegetables for dinner, the pair reached their goal weights in less than a year. Becky is pictured after her weight loss

On a typical day, the pair would skip breakfast before having a supermarket meal deal for lunch and a huge takeaway dinner.

But, despite their penchant for calorie-laden food, Becky insists her children have always had a well-balanced diet.

‘We always made sure the children ate well,’ she said. ‘We’d give them a healthy meal and get the takeaway menus out when they were tucked up in bed.’

In 2015, Becky got her first wake-up call when she was getting dressed for work, and realised she could not do her size 24 trousers up.

She added: ‘I looked in the mirror and thought to myself, ‘You are a disgrace. You’ve beaten cancer and now you’re going to let your weight beat you.’

At her heaviest Becky was a size 26, thanks to a diet of takeaways. She weighed over 18 stone before embracing the  1:1 Diet by Cambridge Weight Loss

Signing up to the 1:1 Diet by Cambridge Weight Loss at the recommendation of a friend, Joanne Collins, 49, Becky restricted her diet to 1,000 calories a day, swapping snacks and takeaways for 1:1 Diet substitute products and healthier foods.

With David following a similar diet, the overhaul worked, with her losing an impressive seven stone, and him three.

For two years, the pair maintained their new physiques – but a freak accident that left Becky with vital organ damage in April 2018, saw Becky fall off the wagon during her recovery.

She explained: ‘I was playing a game of badminton when I fell over and grabbed the net. The whole thing collapsed, and I landed on the upturned feet of the net.’ 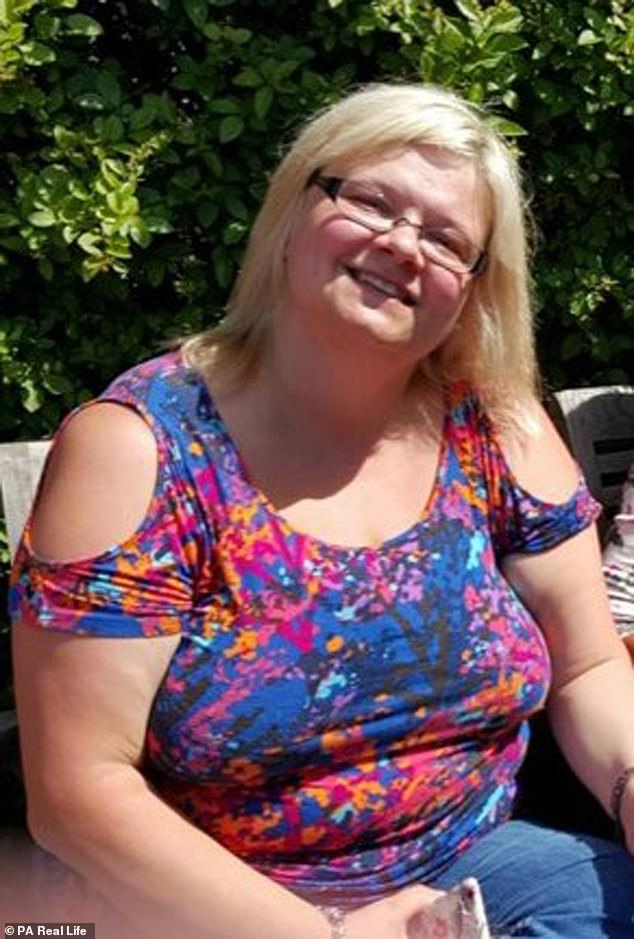 At her heaviest Becky was over 18 stone. Despite losing weight in 2015, a freak accident that left Becky with vital organ damage in April 2018, saw Becky fall off the wagon with her diet during her recovery

Becky and David, pictured together before their weight loss, admit their relationship was built on unhealthy foundations when they bonded over a love of football and going to the pub

Rushed to Southampton General Hospital, Becky was told by doctors that, although the net had not pierced her skin, the impact of the fall had ruptured her liver and severely bruised her adrenal gland, pancreas and kidneys.

‘They said the force of the fall has caused severe damage to my organs. I was given a load of anti-inflammatories and painkillers, but apart from that all I could do was rest,’ she said.

‘The liver is incredible at repairing itself – although it still meant I wasn’t able to work for five months.’

Recovering at home, Becky found herself turning to calorie-laden food for comfort.

By January 2019, she was four stone heavier than before the accident, undoing all her hard work following the 1:1 Diet plan.

That same month, she logged onto Facebook one day, and was left red-faced by a throwback snap from 2005 that had been posted to her profile as a memory.

‘It’s from David and mine’s first proper New Year’s Eve together,’ she said. ‘We’d gone to the fancy dress shop and there was only one outfit that fit – Tweedledee and Tweedledum from the Lewis Carroll book Through the Looking Glass. 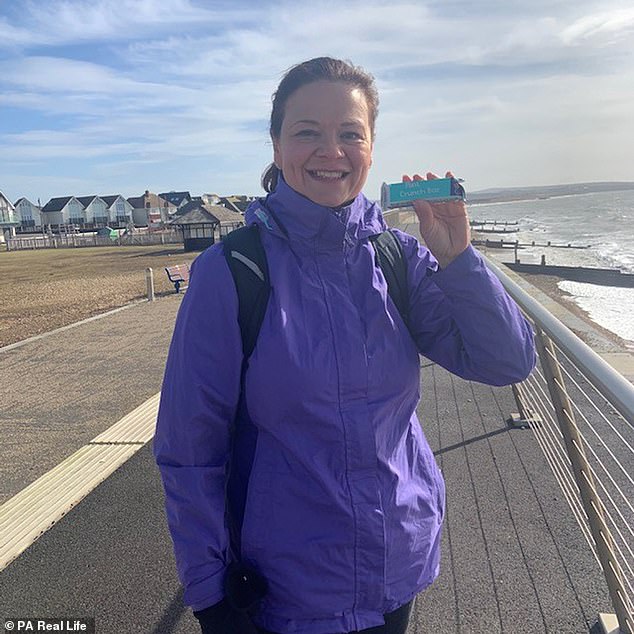 Becky got back on the bandwagon in 2018. Now, not only their diets, but their entire lifestyles have been completely transformed. Becky is pictured after her weight loss

‘It pops up every year, and normally we laugh it out – but last year it was all too much and I realised I needed to change. I couldn’t go back to that way of life.’

Enlisting the help of Joanne, who was by then a qualified 1:1 Diet coach, Becky got back on the bandwagon – with David, then weighing 18st 9lb, once again joining her for support.

Following the plan, kick starting their day with porridge, followed by a 1:1 Diet product for lunch and grilled fish and steamed vegetables for dinner, the pair reached their goal weights in less than a year. 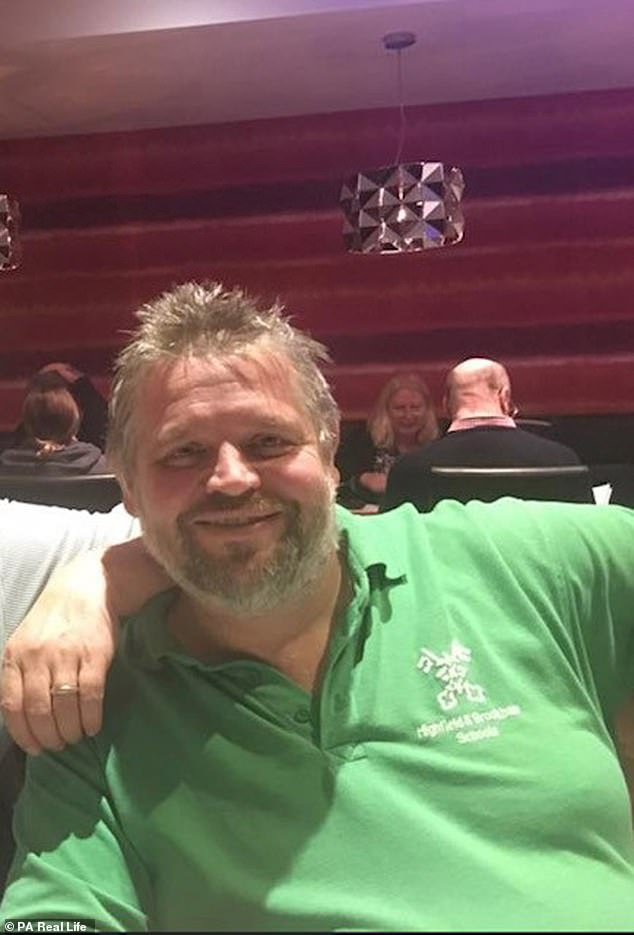 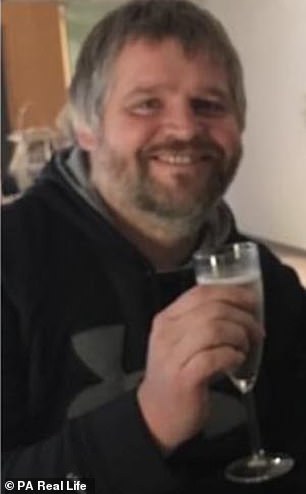 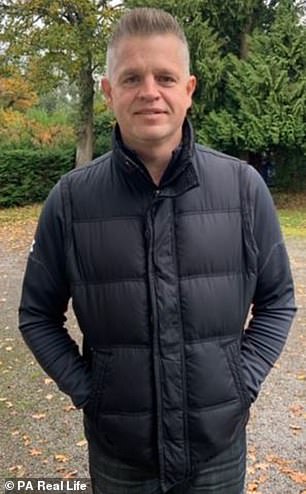 David (left) before his weight loss, used to love nights at the pub and would happily down up to 15 pints on a night out. David said he is now much more outdoorsy after living a sedentary lifestyle for many years

Now, not only their diets, but their entire lifestyles have been completely transformed.

Becky concluded: ‘We used to be so sedentary before all of this, now we’re totally different – really outdoorsy people.

‘Before the coronavirus lockdown, we would spend basically every weekend exploring the local countryside.

‘It’s like I have a new hubby. David has a new wife and the kids have parents who can finally live up to the role of mum and dad.’