Woman whose wedding photos were stolen is reunited with them 35 YEARS later after a stranger developed a roll of film she’d found in an abandoned handbag – and she’s still married!

A couple who have been missing a collection of photographs taken during their wedding 35 years ago have been reunited with the snaps that were stolen by thieves during their reception.

Mick, 60, and Tracey Hepworth, 55, who married in Leeds, West Yorkshire on July 6, 1985, were left devastated when thieves stole a handbag containing a roll of film captured by a relative during their wedding.

The thieves were chased away by family members, discarding Tracey’s cousin Karen Williams’ handbag as they fled the scene.

Mick and Tracey believed that they would never see the sentimental photographs again, however, unbeknownst to them, passer-by Angie McHale had picked up the handbag that night and had the snaps developed. 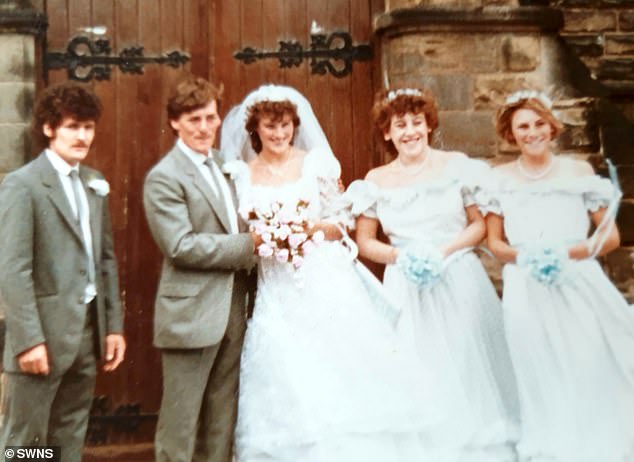 Mick, 60, and Tracey Hepworth, 55, who married in Leeds in 1985, have been reunited with a collection of their wedding photos after they were stolen by thieves during their reception 35 years ago (pictured) 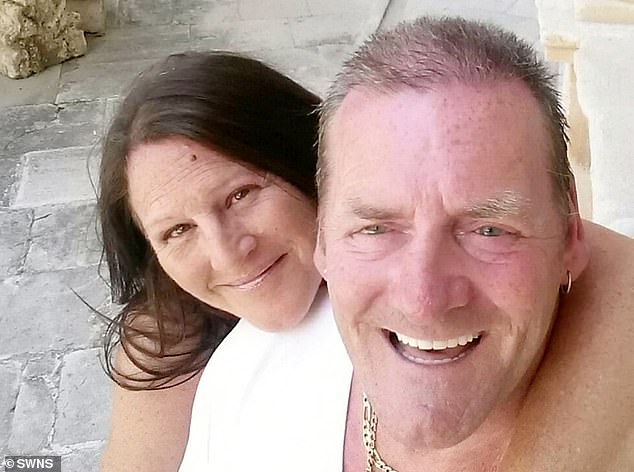 Mick and Tracey (pictured) had given up hope of being reunited with their sentimental photos, unaware that Angie McHale had found the stolen film

Angie, who had no way of tracing the people in the photographs, decided to store the snaps safely.

Despite moving house four times since, it wasn’t until she was packing her stuff up for another move in January that Angie came across the photos again.

She posted them to Facebook to ask if anybody knew who they might belong to, and within hours she was put in touch with the rightful owners.

Karen Williams, 55, said her handbag was taken while she was up dancing at the evening reception of her cousin’s wedding at a pub in Leeds.

Family members chased the thieves and tracked them down to a nearby pub, where a fight ensued which saw Karen’s dad John Warren stabbed.

‘We were all just up dancing and when we went to sit back down, my bag was missing,’ explained Karen. 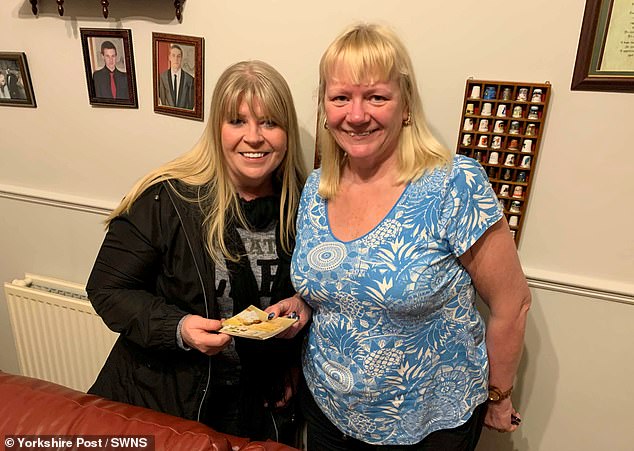 Tracey’s cousin Karen Williams had her bag stolen by thieves during the wedding reception. Pictured, Angie with Karen 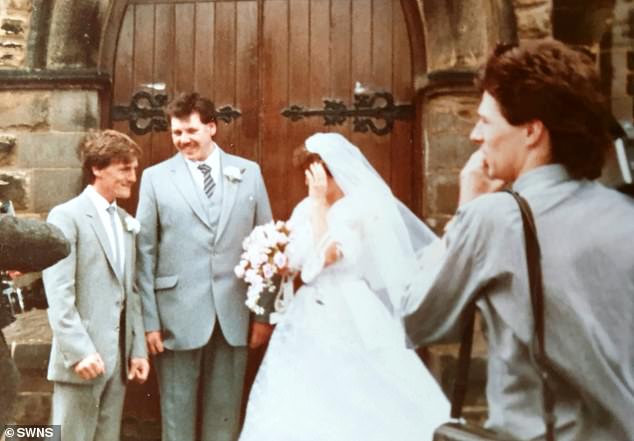 Angie spotted the disposed handbag while walking down the street and decided to take the film to be developed at the chemist. Pictured, a wedding photo from the stolen film 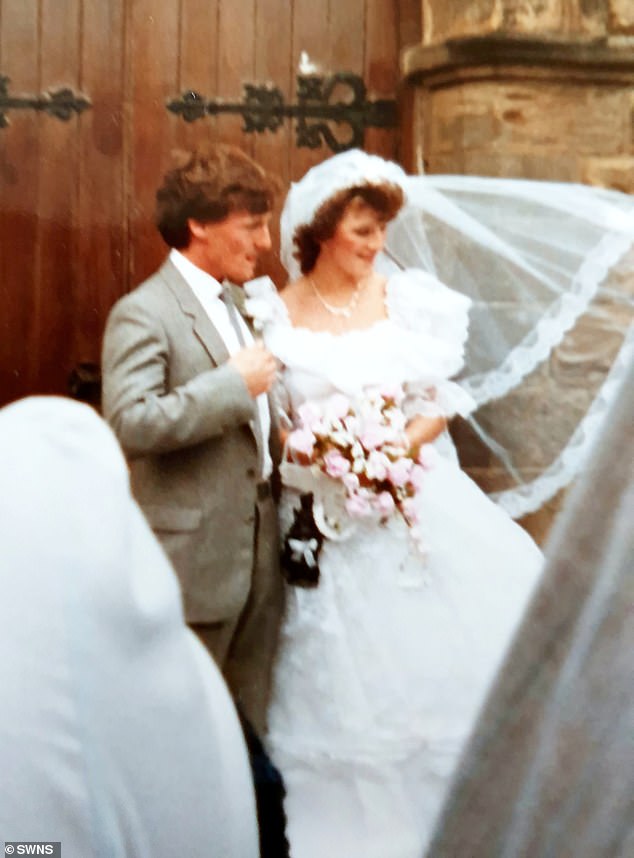 Angie posted the photos on Facebook after she stumbled upon them while packing her belongings up when she was due to move house. Pictured, Mick and Tracey at their 1985 wedding

‘We saw the two men running out and my auntie ran after them shouting “it is them lads.” ‘A huge fight broke out and my dad got stabbed.

‘The lads ran off and must have gone up and around the corner, we just lost sight of them. Some girls told my brother not to chase after them and they ended up getting away.

‘The camera and film were in my handbag. As far as we were concerned, the pictures had gone, never to be seen again.’

But almost 35 years on, Angie was clearing out her home ready for another move when she came across the pictures and made the online appeal.

‘I was walking down the street when I spotted the handles of a hand bag,’ she explained. ‘The bag was empty but on the floor, there was a roll of film.

‘I decided to take the film to be developed at the chemist and discover what was on the photographs. The film must have just fallen out of the camera.’ 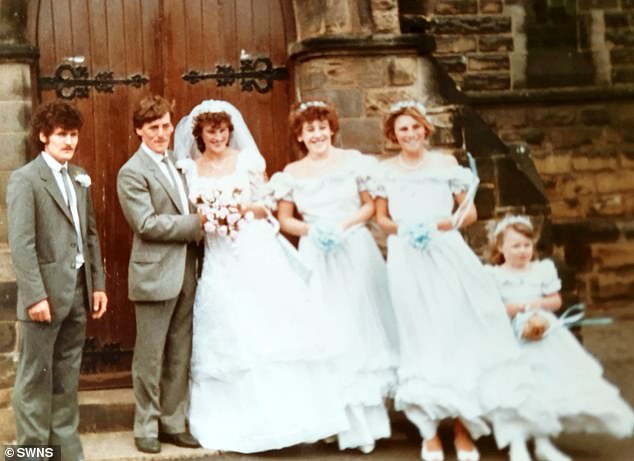 Angie said she had no intentions of ever throwing the photos away, despite her doubt that she would find the owners. Pictured, Mick and Tracey in 1985, with their bridesmaids and a best man 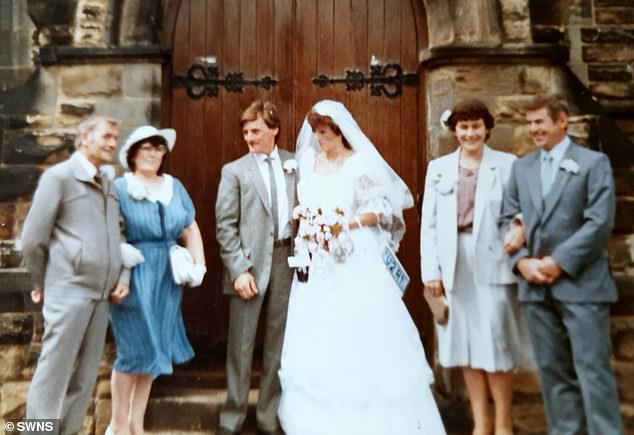 Angie’s post was widely circulated on Facebook and racked up over 500 comments as many joined the search for the owners of the photos. Pictured, Mick and Tracey with their family at their wedding in 1985

She continued: ‘I thought I had got the wrong photographs before realising I had added the roll I found.

‘There was no internet then, I just didn’t know how I would find out who was in the pictures.

‘I came across them again after having a clear out ready to move and thought I could try one last time to find the people involved. I vowed to find them.

‘I would have never thrown the photographs away, I just never thought I would find them. To put faces to the old photographs is incredible.’

Karen’s sister, Christine commented: ‘Somebody I know messaged me and said, “I think I have spotted you on some old photographs.”

‘Everyone locally had shared it, there were 400 or 500 comments when I saw the post. I got asked: “Have you seen this?!’

‘I couldn’t believe it, the photographs posted on Facebook were the missing ones from 1985. Our family were absolutely amazed.’

Christine and Karen reached out to Angie, who told them to give her their address to reunite them with the photographs. 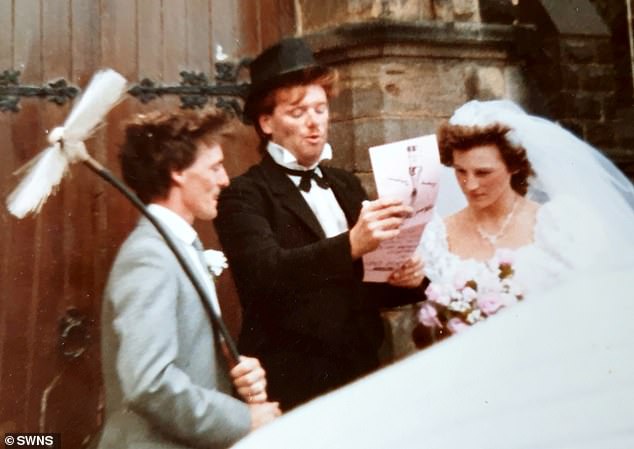 Angie was met by Karen and Marjorie Warren, Karen and Christine’s mum, when she arranged to return the photographs. Pictured, the wedding snaps from 1985 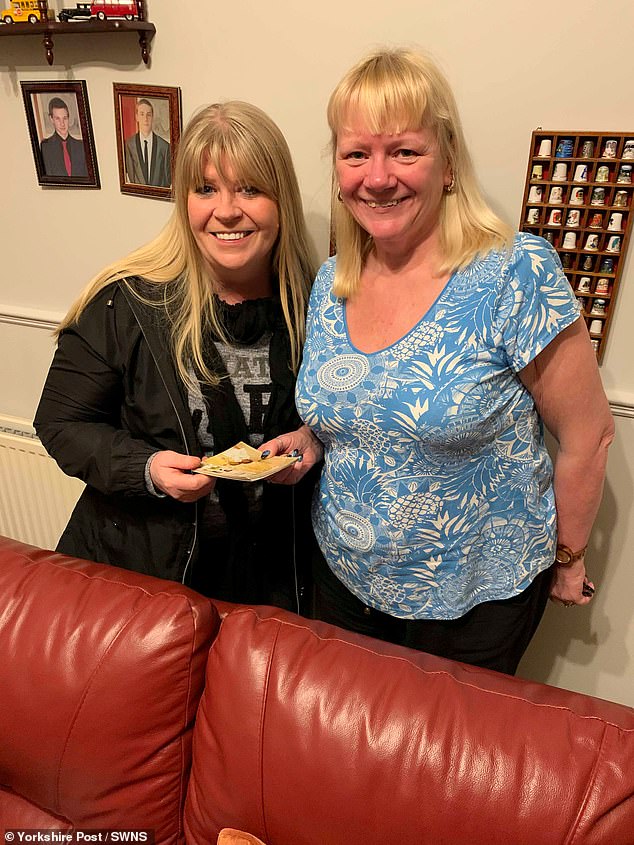 Karen’s sister Christine received a message from someone who recognised the photos being shared. Pictured, Angie with Karen

When Angie turned up at the family’s house in Leeds, Karen and Marjorie Warren, Karen and Christine’s mum, were waiting there with flowers.

‘It was lovely to see such happy memories of a wonderful day despite the unfortunate incident with my uncle,’ said Tracey. ‘I remember it was such a happy and exciting day for us all as a family.’

‘We will be celebrating our 35th wedding anniversary on 6th July 2020. It was a thoughtful gesture for what was a complete stranger, Angie Mac, to decide to track down the owner of the photos.

‘We have sadly lost some family from these photos but its a lovely reminder of them and I’m sure it’s brought a smile to their faces as it has done for us and all our family.

‘It just shows Facebook can be used for good and I was completely surprised at how many comments there were wanted to know if we were still together.

‘Happily we are so the story did have a happy ending.’ 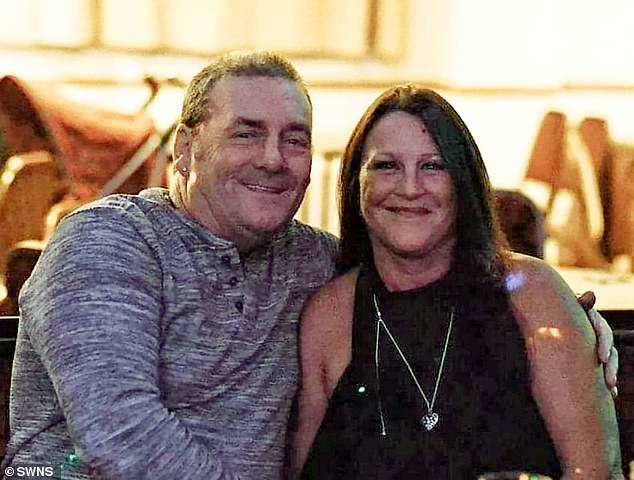 Tracey (pictured with Mick) revealed they’ve lost some of the family members who were photographed, but the images are a ‘lovely reminder’ of them. Pictured with Mick recently