People overclaiming work-related expenses, accountants encouraging clients to engage in illegal behaviour, and businesses using technology to hide their sales will be the targets of a renewed effort by the Tax Office that the federal government hopes will bring in an extra $1.2 billion in revenue.

The ATO has confirmed an extra $111 million in funding, contained in the mid-year budget update, will go towards extending efforts to collect personal income tax and boosting its campaign focused on the shadow economy. 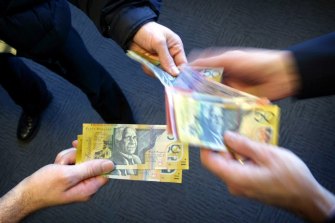 The federal government hopes to raise an extra $1.2 billion in income tax through a crackdown on personal income tax collections and the shadow economy.Credit:John Woudstra

Since the 2018-19 budget, the federal government has poured extra money into the Tax Office to both tighten scrutiny around personal income tax returns and the shadow economy. The ATO estimates there is up to $11 billion a year in missing taxes due to economic activity outside the law.

That extra funding to the ATO was due to end in the middle of next year, but Treasurer Josh Frydenberg used the mid-year update to extend the work another 12 months.

The ATO will also focus on investors who did not pay the right amount of capital gains tax or tax on rental properties, tax agents who “game the same” and encourage their clients towards illegal behaviour, and omitted income such as that from overseas or distributed through partnership trusts.

“Whilst most Australians attempt to pay the right amount of tax, this funding will allow us to focus on those high-risk taxpayers through audit and reviews to ensure they are meeting their obligations,” a spokesperson for the ATO said.

Part of the extra $111 million in funding will go into boosting compliance across the shadow economy.

Since 2018, the ATO has raised more than $2.9 billion in tax liabilities, largely by bringing undeclared income into the tax system and by pursuing operations that have failed to lodge tax returns.

The extra funding will allow the ATO to continue targeting existing and emerging shadow economy activities. This includes the digital shadow economy, with the ATO considering how to apply penalties where a business is found to use banned “electronic sales suppression tools”.

These can be either software or used with hardware such as a USB. They allow it to illegally reduce the value of sales transactions or delete them altogether without leaving a record in the system. They both reduce profit levels (avoiding company tax) and GST collections. Laws were passed in 2018 to make it illegal to supply, produce or use these tools.

The ATO said the community was less tolerant of shadow income, with the number of referrals to its tip-off line increasing.

“The COVID-19 pandemic was an incentive for many businesses to come back into the system, as stimulus payments were designed so that you couldn’t access them without being in the system,” a spokesperson said.

“We want businesses to stay in the system, but we are concerned that as the economy improves, some businesses may consider that re-entering the shadow economy is business-as-usual. We remain alert to this.”

Apart from raising an estimated $1.2 billion in overall receipts, Treasury believes the states and territories will get a $187.7 million boost over the forward estimates via higher GST revenues.

Despite COVID-19, the government is expecting to collect a record $239 billion in personal income tax this financial year and $100 billion in company tax.

The extra revenue will make a small inroad into a budget deficit that this year is expected to edge down to $98.9 billion while gross debt is forecast to reach a record $1.2 trillion by 2024-25.