Damning truth about the nation’s testing scandal: After a strong start in coronavirus battle, the UK is lagging behind the rest of the world and the Government doesn’t have the testing capacity to cope, writes BEN SPENCER

As the world battles the deadly coronavirus outbreak, Britain’s response has faced savage criticism, particularly the Government’s handling of testing.

Here, Medical Correspondent Ben Spencer investigates what has been going wrong for our testing programme – and what steps can be taken now to fix it and save thousands of lives across the country. 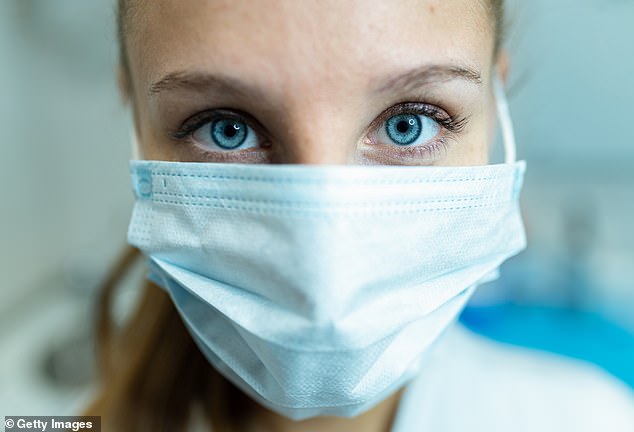 Until scientists develop a vaccine, mass testing will be our most powerful weapon in the war against coronavirus.

Testing tells experts who has the virus, how it is being transmitted and where the hotspots are. The World Health Organisation (WHO) has told every country to ‘test, test, test’ – and said any nation which fails to will be fighting the virus ‘blindfolded’.

Countries such as South Korea and Singapore have already shown it is possible to curb national outbreaks with aggressive testing programmes.

These countries, which were hit badly in the early days of the pandemic, made sure every suspected patient was properly diagnosed, their contacts tracked, and anyone who had been in touch with them put into isolation.

The country started strongly in its fight against coronavirus.

The initial ‘contain’ phase of the campaign identified suspected cases as travellers arrived from China, northern Italy and other countries affected early on.

People were tested, isolated and all their contacts traced. A testing protocol – one of the first outside China – was set up in January at Public Health England’s main lab at Colindale, north-west London, then expanded to 12 other public health laboratories.

But on March 12, with 600 people diagnosed with the virus, the Government admitted the containment strategy had failed and that the virus was freely spreading throughout the population.

At that stage ministers decided to change tack and said they would only test those in hospital and would stop contact tracing. In doing so, they gave up all knowledge of how the virus was spreading outside hospitals. The information is now based on death rates and hospital admissions. 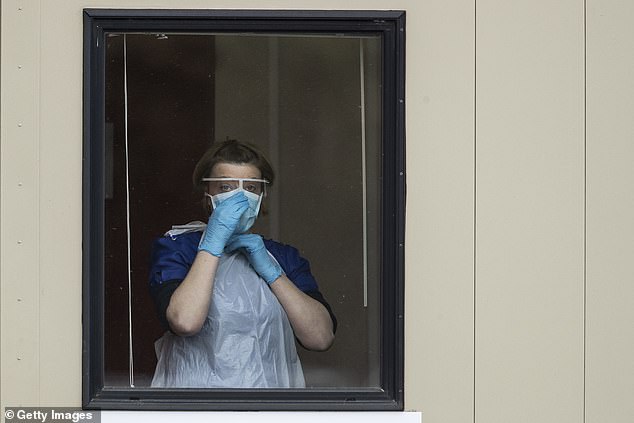 Pictured: A nurse adjusts her face mask before taking swabs at a COVID-19 Drive-Through testing station for NHS staff on Monday

Officials say they can only test so many people – and must reserve this for the very ill.

The testing programme was expanded to an additional 40 labs in NHS hospitals last month, but it has still not been enough.

As of last night, the US – which was slow to start its response to the crisis – had tested more than one million people, equivalent to 3,058 per million Americans.

Every country in the world is trying to ramp up coronavirus testing, and there is a major race for equipment.

Testing is done by taking a cheek swab, which is sent to a lab to seek evidence of the ‘antigen’ – the virus causing the illness.

The process, called a polymerase chain reaction (PCR) test, is nothing new – the same machines are used to test for seasonal flu.

But existing equipment is not sufficient for the scale of testing.

British suppliers of testing swabs, such as Surrey-based Novacyt, are selling their kits abroad as there are not enough UK machines to process the results.

Officials have requisitioned university equipment and struck a deal with Roche Diagnostics to supply two high-capacity machines to process tests, but it will only boost UK capacity by 5,000 a day by the end of April.

The testing process involves certain chemicals that are added to a cheek swab and then run in the testing machine. These reagents help spot strands of coronavirus DNA in samples.

Officials are looking for alternative sources of these chemicals and investigating whether different substances could be used.

One in four NHS doctors is now off work self-isolating.

Thousands of key workers could be allowed back to work if they were proven clear of the virus. But testing of staff is minimal.

Last weekend, the NHS announced a new staff testing procedure involving the establishment of three new testing hubs. These hubs have been equipped by two private companies – Thermo Fisher Scientific and Randox. Staff are being tested by Boots workers at drive-through centres around the UK.

The NHS aimed to initially test 800 staff. Insiders last night said the numbers of tests completed are still ‘in the hundreds’.

Use of private firms in the staff testing programme shows what can be achieved by looking outside the closed world of the NHS and other health agencies.

But businesses are not being used nearly enough in the testing war. In Germany, anyone can be tested with even mild symptoms, because they have a network of private labs which anyone can use through their health insurance.

There are not as many labs in Britain as the strength of the NHS means the private health market is smaller – but there are enough to boost capacity if used.

But officials have been reluctant to use these labs because they say they may not guarantee accuracy.

All testing so far has involved centralised PCR tests, which involve transport to a lab, processing by staff and a wait of up to 48 hours for a result.

The Government has appealed to companies to develop rapid ‘point-of-care’ antigen tests that could give a result in half an hour.

An emergency summit was held at Downing Street to discuss the challenge on March 17, with Roche, Thermo Fisher, Boots and Amazon in attendance.

US medical firms Abbott and Cepheid have since developed two such tests, and have already received approval from the FDA, the US medical watchdog.

But these are likely to be swallowed up by the US so it is vital that UK companies make their own breakthroughs.

ANTIBODY TESTING OFFERS A ROUTE OUT

Every test so far has involved ‘antigen’ testing – determining whether someone suffering symptoms has Covid-19.

But ministers have pinned their hopes on an ‘antibody’ test, which shows whether someone has carried the virus in the past.

The Government is planning to use these tests in a randomised testing programme across the population. Such a project – which may start as early as mid-April – would mean officials were not blind in their fight against the virus.

If it showed a high percentage of people are immune it could mean an early lifting of the lockdown.

Some 17.5million tests have been earmarked for the testing programme but still need to pass stringent quality-control checks.

If they pass these hurdles, it would solve many problems – and could pave the way to a return to normality for us all.