DAN HODGES: The liberal dream is alive but there’s no pot of gold at the end of Keir Starmer’s Rainbow Alliance

A few weeks ago, a Tory strategist helping to co-ordinate the party’s local election campaign noticed something strange.

Over a period of several days, a series of conflicting messages had been coming back from candidates and activists.

‘There was this weird pattern starting to develop,’ she told me.

‘Our people in the North East were saying, “Labour are pushing hard up here, but the Lib Dems are nowhere”. But then in the South West, I was getting these reports, “the Lib Dems are really pressing, but Labour have completely vanished”.’

Perplexed, she started to do some number crunching. And her efforts revealed some startling figures. In the North East of England, the Conservatives and Labour are fielding candidates in almost all the contested seats, as they did when the elections were last fought in 2018.

But the number of seats the Lib Dems are contesting has slumped from 78 per cent in 2018, to 55 per cent in this Thursday’s vote.

In the South West, the picture is dramatically reversed. Again, the Conservatives are contesting almost all the seats up for grabs, while the Lib Dems are fighting almost 90 per cent.

But the number of Labour candidates has collapsed, down from 97 per cent in 2018, to 60 per cent this year. 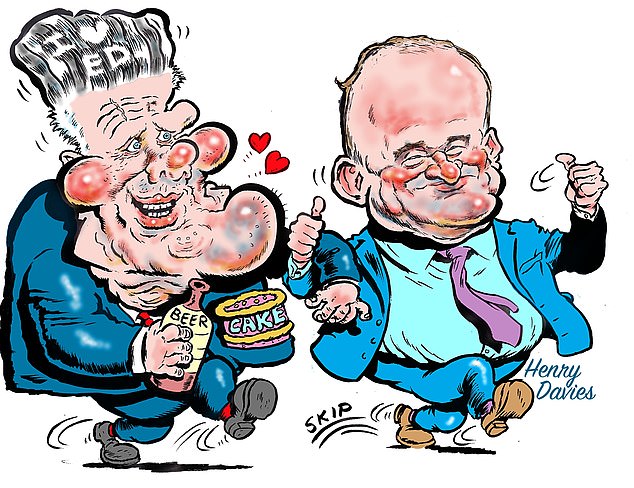 ‘Whatever agreement Starmer and Davey have reached has clearly been contrived behind closed doors, well away from the inconvenient gaze of the voters and the Press’

‘It is pretty obvious what is going on,’ the official said. ‘Labour and the Lib Dems have done some sort of deal.’

It’s finally happening. The Great Progressive Realignment – whispered about longingly over dinner tables from Islington to Penzance – is becoming a reality. All be it, secretly.

Last year, after Labour soft-peddled to deliver the Lib Dems victory in the Chesham and Amersham by-election, Keir Starmer hinted he might be amenable to what some people were calling the ‘Rainbow Alliance’.

‘We’ve got to do a lot more work, you know, obviously going into the next General Election. There will be a question of what we do,’ he told Robert Peston.

‘There’s a majority broadly against the Tories in the country and obviously we’ll have to see how we go into the next General Election.’

But the official line was clear – only a Labour Government could eject the despised Tories. There was no pact.

Then last month, the rumours resurfaced. Reports emerged that the two parties had agreed not to compete ‘actively’ in each other’s top 30 target seats at the next General Election.

But again, the official denials were swift. It was ‘far too early’ to be discussing pacts, a Lib Dem source insisted. 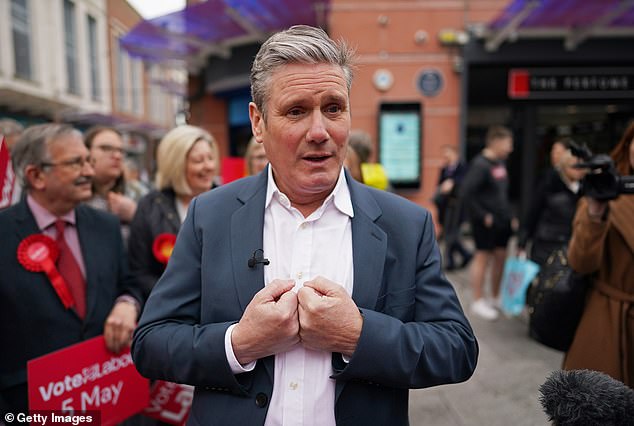 ‘Last year, after Labour soft-peddled to deliver the Lib Dems victory in the Chesham and Amersham by-election, Keir Starmer (pictured) hinted he might be amenable to what some people were calling the “Rainbow Alliance”‘

A Labour spokesman was even more forthright. ‘We’re not in the business of pacts. Only Keir Starmer’s Labour offers the security, prosperity and respect that the British people want and deserve,’ they said.

But now the cat is out of the bag. Or rather, the ballot box. On the ground, the picture is crystal clear.

Across Labour’s former heartlands, Ed Davey’s troops are being stood down. In Bury, the Lib Dems are fighting only 15 of the 51 seats being contested. In Hartlepool, two of 13. In Blackburn, four of 15.

Meanwhile, across swathes of the South and South West, the favour is being returned. In Somerset, Labour is contesting only 45 of the 110 available seats. In St Albans, 25 of 56. In Cheltenham, eight of 21.

And for many progressives, this represents the dream scenario – both ideologically and politically. For all the upbeat talk of Labour’s widening poll lead, very few of the party’s MPs or advisers I speak to actually believe Keir Starmer can unilaterally secure a working majority in 2023 or 2024.

Equally, there are a number of Labour MPs and activists who believe an alliance with the Lib Dems will finally free them to be the party they long to be.

No more pandering on immigration or welfare. No more backsliding on issues such as trans rights or academic safe spaces. And of course, the Holy Grail: a concerted drive to return Britain to the EU. 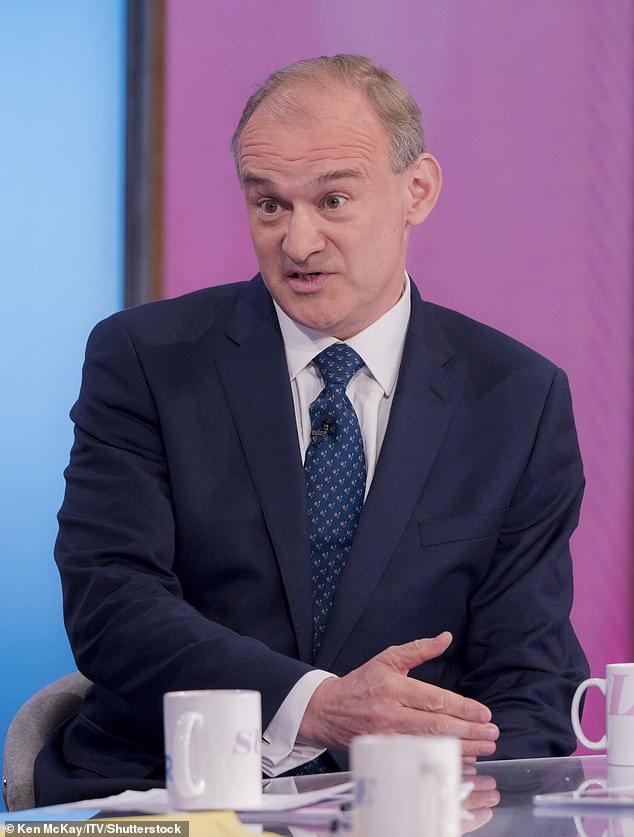 Many Lib Dems also see an upside. Despite the post-traumatic stress disorder many still suffer from their time in coalition, they recognise they will remain politically irrelevant unless they can again manoeuvre themselves into a position where they hold the balance of power.

But before Britain’s hard-pressed liberals start popping the prosecco, they should pause. For one thing, the Tories spot an opening.

This morning, Tory party chairman Oliver Dowden has written to both Keir Starmer and Ed Davey, asking them to explain the terms of their Faustian pact.

A Tory source said: ‘This kind of backroom dealing by Starmer and Davey is typical. They shamelessly tried for years to overturn the Brexit referendum vote, and now they’re sticking two fingers up to the voters again. They must explain why they have designed this stitch-up, for sake of transparency.’

And behind the punchy language, they have a point. There have been political deals before. The Lib/Lab pact. The Cameron/Clegg coalition. Theresa May’s ill-fated confidence and supply deal with the DUP.

But they were public. Conducted with the full knowledge – if not necessarily the consent – of the people.

Whatever agreement Starmer and Davey have reached has clearly been contrived behind closed doors, well away from the inconvenient gaze of the voters and the Press.

So what has been proffered and what has been gained? If Labour and the Lib Dems don’t come clean, the Conservative Party again intends to fill in the gaps.

This week Tory researchers have been meticulously combing their way through the details of Davey’s policy pronouncements – £30billion to be spent on the introduction of a new Universal Basic Income; the abolition of mandatory prison sentences for possession of acid and knives.

And most significantly, a pledge set out at the time of the Lib Dem 2021 Spring Conference, to ‘work to create the conditions through which the UK is able to join the EU once again’. 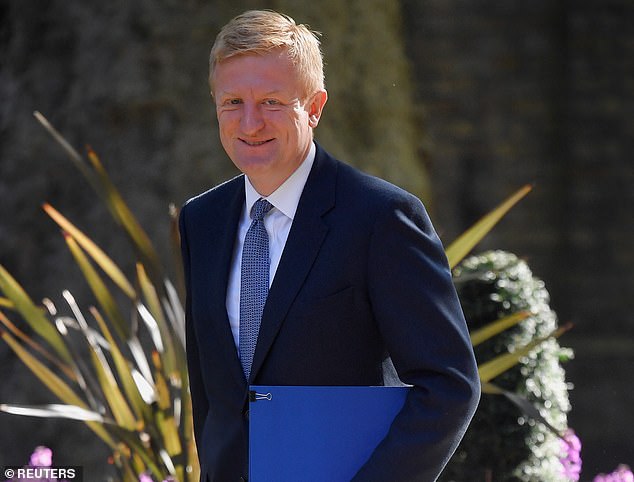 ‘Tory party chairman Oliver Dowden has written to both Keir Starmer and Ed Davey, asking them to explain the terms of their Faustian pact’

Whether warning that a vote for Davey’s Brexit Jonahs will effectively represent a vote for Captain Hindsight – and vice versa – will impact the polls on Thursday, is doubtful.

Shadow Ministers I spoke to over the past few days were struggling to maintain their message discipline.

‘I know I’m supposed to be talking down our chances and managing expectations,’ one told me, ‘but to be honest, it hasn’t felt this good for us on the doorsteps for at least a decade’.

But the Tories, like their opponents, are playing a longer game.

Within Labour and Lib Dem HQs, the 2022 local election arrangement is viewed as a dry run for the non-aggression pact they will form the instant Boris Johnson – or his successor – steps into his or her car and embarks for the Palace to call a General Election.

‘It’s perfect for us,’ one Minister told me, ‘because we won’t just be able to say a vote for Starmer is a vote for Davey. We’ll be able to point to Sturgeon as well. She’s going to want to be part of the deal. And she’s only going to demand one thing. The break-up of the Union.’

The Rainbow Coalition has been talked about for years, if not decades. This Thursday, it will finally become a reality.

But those progressives stampeding towards the pot of gold at the end of it should be wary of what they eventually find.