Making her pointe! Ballet teacher dances in the aisles of a French supermarket to protest against the government’s ‘nonsensical’ approach to lockdown and how it’s impacted the arts sector

A ballet teacher has filmed herself dancing in aisle of a French supermarket to call out the government’s ‘nonsensical’ approach to lockdown.

Amandine Aguilar, of Sausset-les-Pins, in South West France, said she recorded the daring video to challenge how the Macron administration’s ‘absurd’ management of the Covid-19 pandemic has left the arts suffering.

Dressed in a black tutu reading ‘I am non essential,’ she danced around the aisle of a supermarket located in Marignane.

She could be seen trying to access ‘non essential’ products, which were cordoned off from customers, and picking up several packs of toilet paper and pastas in a nod to the frenzied stockpiling some customers made before the first French lockdown, which started on March 17 and lasted until May 11.

Leaping and hopping through the store in the video, Amandine later wrote on Facebook several closures and a lack of support from the government had left her ‘fed up’ and ‘depressed.’ 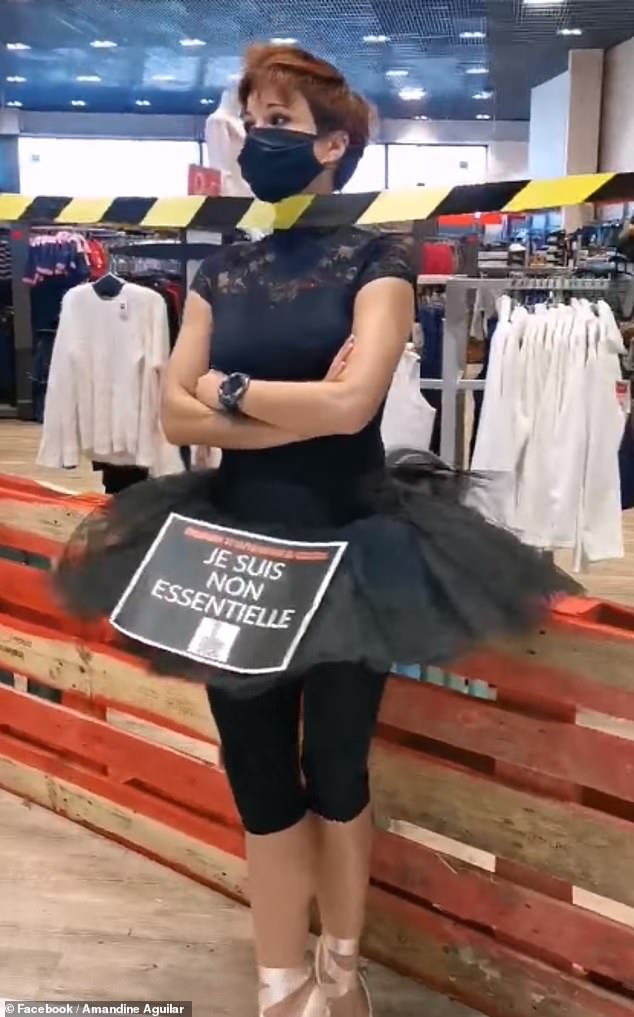 Dance teacher Amandine Aguilar, of Sausset-les-Pins, in South West France, recorded a daring video of herself dancing in a supermarket to challenge the French government’s ‘absurd’ management of Covid-19 restrictions 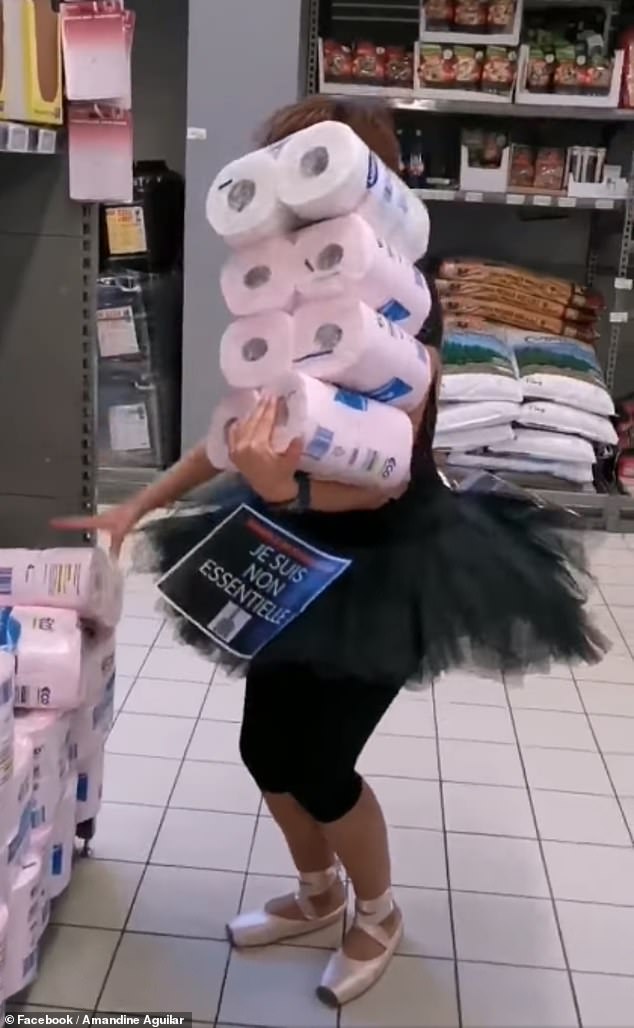 France has now entered a second lockdown on October 29, set to last until December 1.

The dance teacher has taken issue with schools remaining open during lockdown, but extra-curricular activities such as dancing being forced to cease, leaving her jobless for the second time this year.

In the video,  Amandine, wearing ballet shoes and a black tutu with signs reading ‘I am non essential’ on its front and back, entered the store like any other shopper to the sound of a remix of Swan Lake.

She first headed to a section of ‘non essential’ products, which had been cordoneded off by the supermarket to limit their access to customers.

Amandine could be seen trying to get her hands on the items, which included children’s toys and Christmas ornaments. 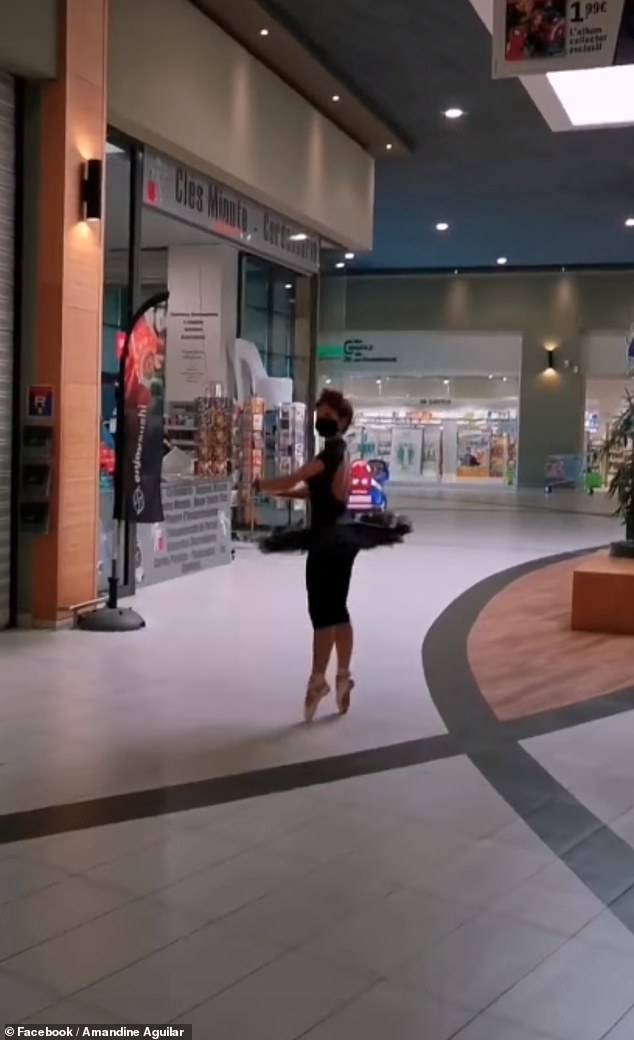 Amandine could be seen dancing and leaping around the shopping mall, with a sign pinned to her tutu saying ‘I am non essential’

At some point, the ballerina could be seen using the cord to imitate strangulation, in a symbolic act representing her feeling that the government is ‘gagging’ the arts with new measures.

Continuing on with her ‘shopping, Amandine then moved on to dancing in the grocery and meat aisles, while surprised shoppers looked on in disbelief.

She could also be seen stockpiling toilet paper packs and pasta, two of the items that were prized by panicked shoppers when lockdowns began to take effect across Europe in March. 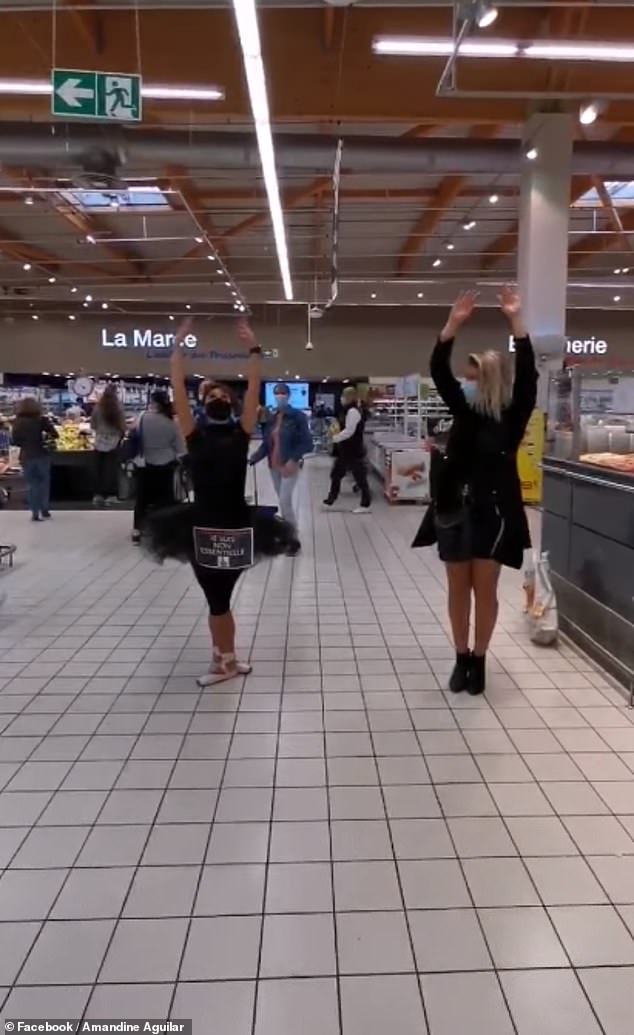 Shoppers in the food aisle joined in on Amandine’s dancing in the video, which was shared by the dance teacher on Facebook 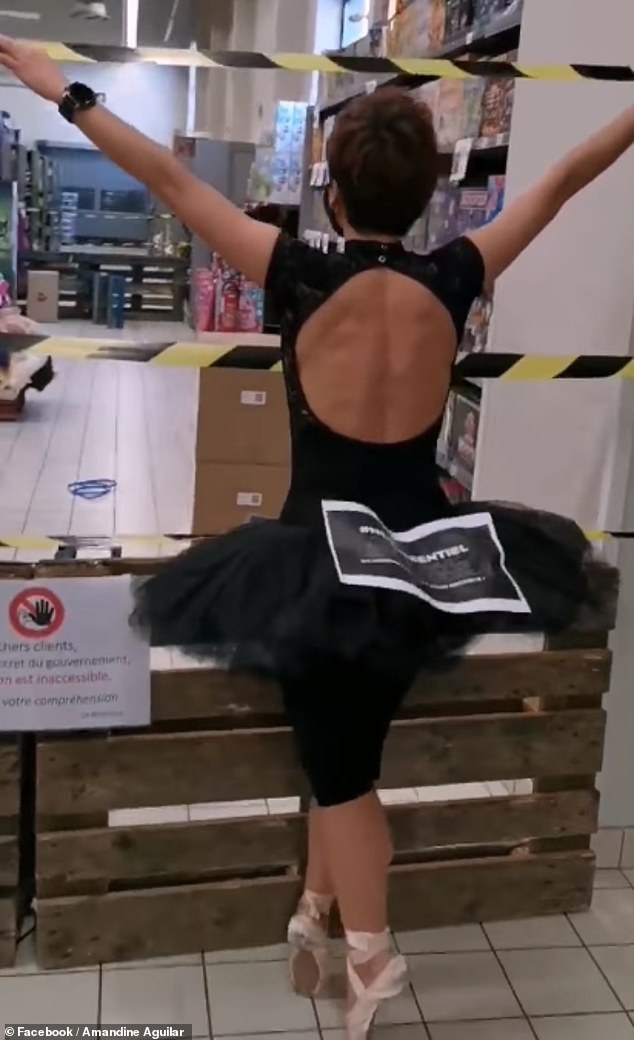 The dance teacher filmed herself trying to get in the non-essential aisle, which has been cordoned off to keep shoppers from reaching them (pictured) 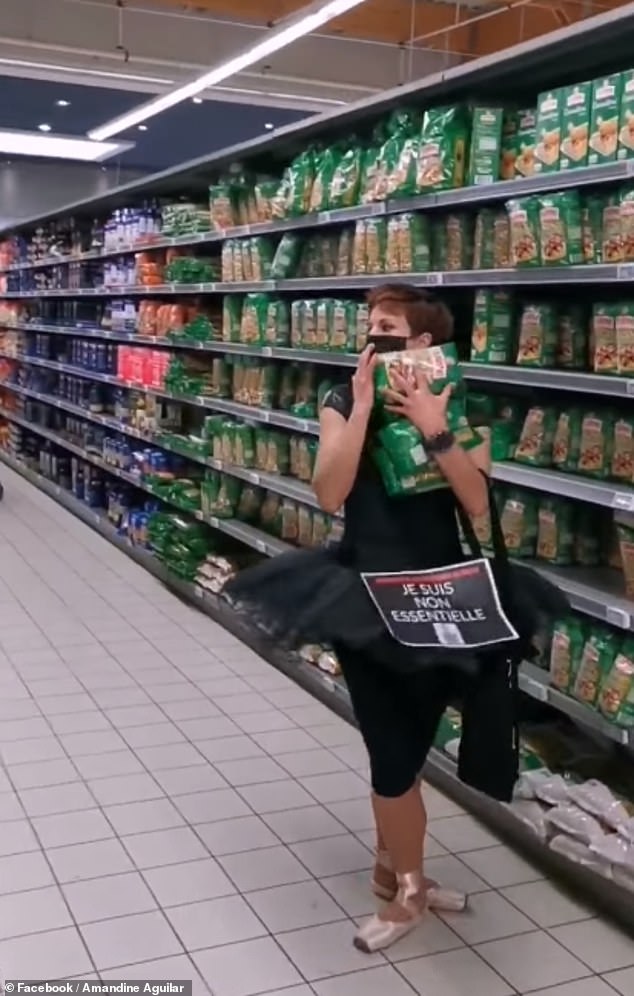 Just like she did with the loo roll, Amandine pretended to stockpile pasta in the video, in a nod to the bulk buying frenzy to swept the world when the first lockdowns were announced in March

In a heartfelt Facebook post, she wrote: ‘I’m not questioning the lockdowm, I am simply pointing the absurdity with which is it managed.

‘Director of an art association, I suffered two administrative closures. I can’t see the end of the tunnel. I am an artist who is confined and depressed,’ she went on.

She also revealed the supermarket, which she decided not to name, let her dance for 30 minutes before sending security after her. 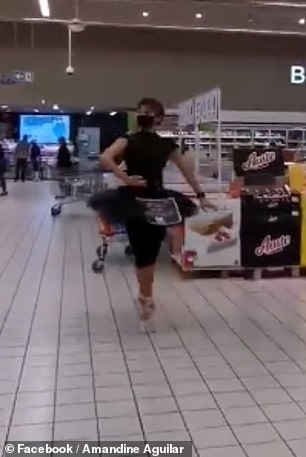 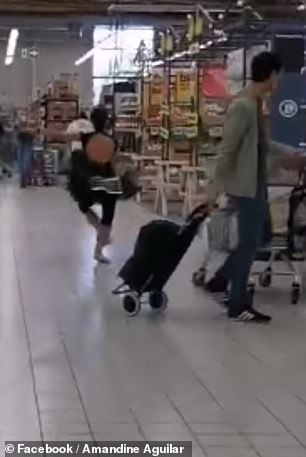 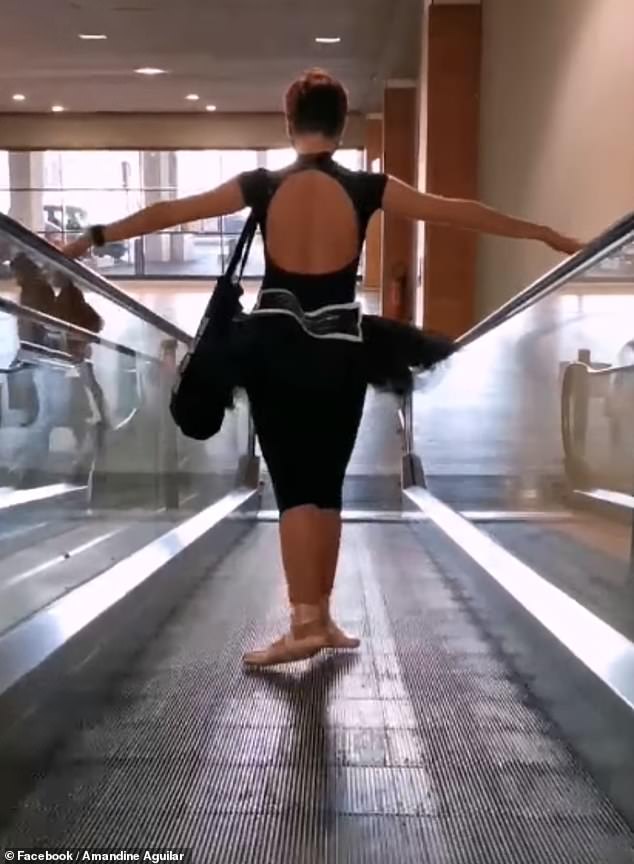 At the end of the video, Amandine was filmed exiting the store. She said she had suffered two closures because of covid this year and could not see ‘the end of the tunnel’

Speaking to national television France 3, she explained that her husband is a teacher, and said that it’s ‘illogical’ that a far greater number of children are able to attend school, while smaller groups can’t do extra-curricular activities.

What are France’s lockdown rules

After a first lockdown which lasted from March 17 to May 11, France put in place a second lockdown on October 29  to curb a new wave of the coronavirus pandemic.

It is set to remain in place at least until December 1.

This saw the return of a permission form that the French have to carry with them while stepping out to prove they are allowed to not be at home.

While meeting out of one’s household is forbidden, visits to care homes are allowed under the new rules.

‘Dancing and teaching children how to dance is my life. Forbidding me from doing it, it’s taking from me a part of myself,’ said Amandine, who’s been giving online classes via Facebook.

‘Our profession brings out joy and makes the world happier. Is it not essential to bring joy to people?’ she asked in the same interview.

While non-essential businesses had to close, including bars and restaurants, students in pre-school, primary school and high school were allowed to attend classes under ‘re-enforced sanitary protocols.

Universities around the country closed, with classes resuming online for these students.

Extra-curricular activities have been cancelled, and any meeting outside of one’s household is forbidden, apart from visiting care homes to see loved ones, under strict rules.

The new measures are set to be carried out at least until December 1.