It has been something of a year for extravagant weddings.

There have been two royal ones, and a number of huge Hollywood ones (see: Nick Jonas and Priyanka Chopra's incredible Mumbai extravaganza last weekend).

So, it is rather refreshing to report that Australian rugby union player David Pocock has married his long-term partner, Emma Palandri, in a park.

The ACT Brumbies vice-captain shared pictures of the beautifully simple ceremony to his Twitter account on Monday morning.

The pictures show Pocock and Palandri, who has now changed her surname to Pocock on her social media accounts, wearing casual clothes before the celebrant.

Another photo shows the pair hauling an esky off to their celebrations. 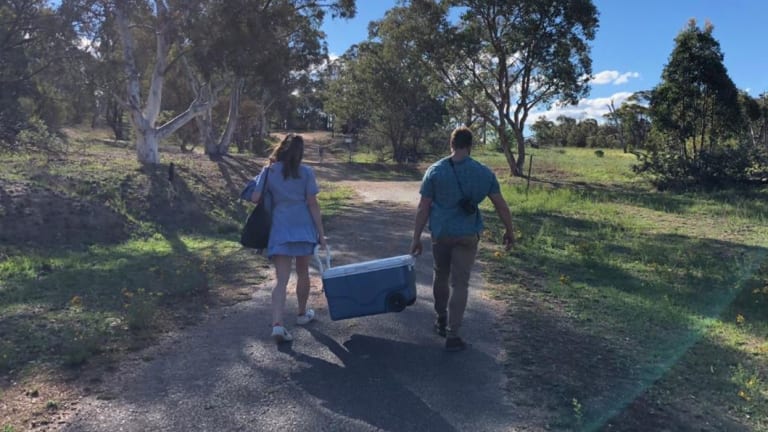 David Pocock has married his long-term partner, Emma, in a beautifully simple ceremony.Credit:Twitter/PocockDavid

A vocal supporter of marriage equality, Pocock, 30, had previously said the couple would not marry until same-sex marriage in Australia was legalised.

After the ACT Legislative Assembly passed a bill to create Australia's first same-sex marriage scheme in 2013, he clarified their commitment was to wait until everyone in the country was able to legally wed, saying the couple had friends and family elsewhere in Australia and were "happy to wait".

"I don’t see the logic in excluding people from making loving commitments to each other," he said at the time.

Speaking earlier this year, Pocock said the couple, who held a commitment ceremony in 2010, would organise "something low-key" given the federal Marriage Act had been amended.