With double entendres abounding, outrageous accents and a farcical plot involving one identical twin being kidnapped by pirates and the other fake-marrying two men to save her father from debt collectors, Opera Australia’s Two Weddings, One Bride could be the silliest thing the national opera company has ever performed. But it’s surprisingly satisfying. 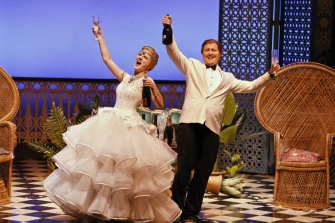 Bubbles aplenty: Zoe Drummond, left, charms in her first lead outing with the company, while Michael Petruccelli threatens to steal the show.Credit:Jeff Busby

The piece is a “jukebox operetta”, where composer Robert Andrew Greene has brought together the style’s biggest hits in one frivolous but entirely harmless, light-hearted romp. There’s Lehar's Dein ist mein ganzes Herz, the Laughing Song and Champagne Song from Strauss’ Die Fledermaus, Vilja from The Merry Widow, and Offenbach’s Can-Can among other sparkling favourites.

This cast includes some of the company’s brightest young stars. In her first lead outing, Zoe Drummond is charming, her soprano bright and attractive. 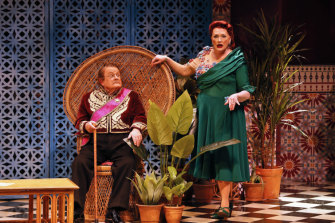 Tenor Nicholas Jones is one of the most exciting young operatic voices in Australia at the moment, and can’t be faulted here. The more seasoned Andrew Jones nails his hilarious character and tenor Michael Petruccelli is almost a show-stealer in a number of small roles.

Accompanied only by piano and solo violin (violinist Yuhki Mayne is superb), Two Weddings seems like more of a pantomime, the style of comedy perhaps better suited to a cabaret venue or dining hall than the formal setting of the Arts Centre's Playhouse.

But there are some genuine laugh-out-loud moments. When it's slotted between the disturbing Ghost Sonata and epic Turandot in the company's season, the bubbly Two Weddings is a vital part of a balanced operatic diet.