The woman who makes herself look fatter: Bikini designer, 29, fires back after being criticised for Photoshopping herself ‘curvier’ in an Instagram photo

Bikini designer Karina Irby has fired back at critics after she sparked backlash for Photoshopping herself to appear significantly ‘curvier’ in a picture.

The founder of Moana Bikini admitted she purposely altered her waistline to look ‘bigger’ to call out people on social media who ‘do the opposite and make themselves look smaller’.

Speaking to Daily Mail Australia, the 29-year-old revealed how common images are being heavily Photoshopped, with girls slimming themselves down, smoothing cellulite and nipping in waists to appear ‘skinny’.

‘I was communicating that it’s so ridiculous that girls that may be considered “curvy” or “bigger” than average have to put up with judgement on a daily basis, both online and in person,’ Karina told Daily Mail Australia.

‘But… it’s entirely okay for individuals (or brands) to over-edit – to a stupid extent – themselves to be so skinny and obviously fake – but this is totally normal, smiled upon and rewarded. I am truly sorry if I offended anyone.’ 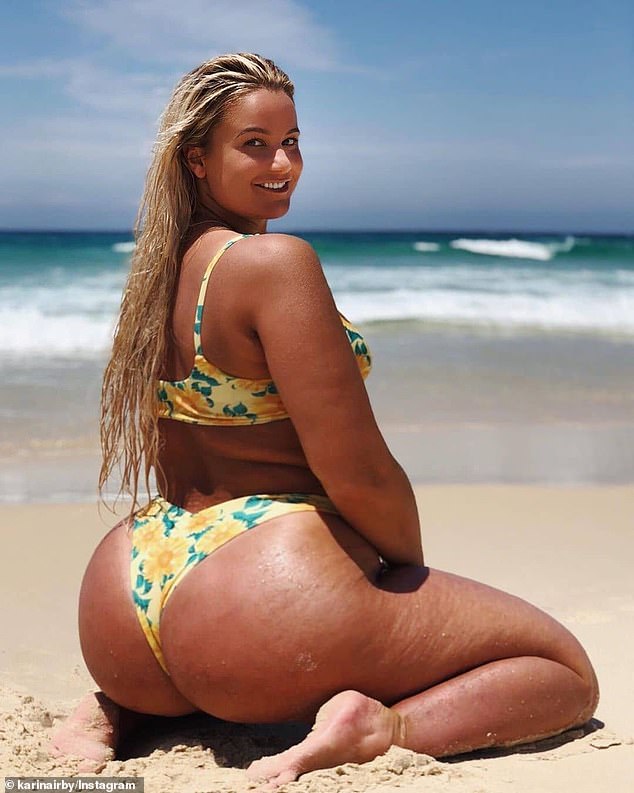 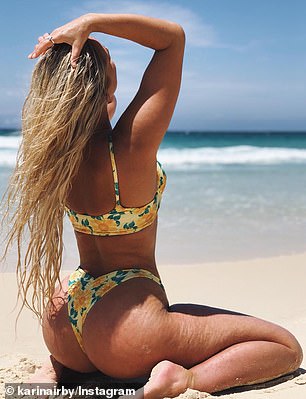 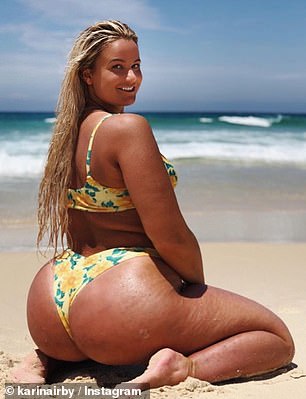 From the same photoshoot, Karina can be seen (left) with her ‘real’ body – before she purposely altered her waistline (right) to look ‘bigger’ because she was fed up with the ‘XS edit’

The body-positive advocate said she decided to remove her post after sparking outrage.

‘I noticed so much love on my recent post but also a whole lot of hate. I did expect some hate, but I am not in the business of offending people, so I removed the post to remove the risk of further offence,’ she said.

‘If anything, however, the amount of noise that post made and how many people took it in entirely the wrong way only goes to further my point about the double standards.

‘All bodies are beautiful, plain and simple. I thought it would be interesting to test the boundaries and see how many people engaged with that image when compared to their daily feed of fakeness, over-editing and downright fraud – which they eat up quite happily.

‘And, as it turns out, everyone is okay with the rest of the world faking skinny, but they still aren’t ready to deal with someone who looks “real”.’

Her original post divided the internet, with some accusing her of Photoshopping herself into a size 18 with an ‘incredibly toned’ physique.

‘It’s not ok for this to be happening. For her to think she can just slip into a large body when she feels like it without suffering any of the fatphobic consequences that follow. Straight up about to rip my hair out with how frustrating this is,’ one critic said.

‘For someone who cr**s on about body positivity every post but doesn’t go past the standard size 12/L and hasn’t for years. As a fat b**** myself, I find this extremely stupid. How can she be trying to talk to such a big audience when she doesn’t carry the average woman’s size.’

However, Karina told Daily Mail Australia the allegations were not true because her brand does sell bikinis ranging from XS to XL, which fits sizes six to 18.

‘Definitely some “haters” out there making large assumptions without understanding, or going to the effort to understand, our brand and message,’ she said.

‘We are always trying to become more inclusive with each successive range and some of our team have gone back to pattern-making school recently to learn grading and pattern-making for plus-size swimsuits (which is a different process to just grading our current sizes).’