Hold the freaking phone! Did I miss something (other than when the Rams scored a touchdown)?! Did Travis Scott propose to Kylie Jenner at the Super Bowl? Since Scott took the stage during halftime to perform part of his hit single, "Sicko Mode," my eyes have been peeled to the screen waiting for the moment that he would bend down on one knee and ask Jenner to marry him. And why wouldn’t I? There has been major engagement speculation that, given the fact that Scott has been looking for a "fire" way to propose to Jenner, tonight would be the night.

But did I witness such a thing on nationally broadcasted television? No sir, I did not! Which is why I was so utterly shocked to see that Scott added a snap of Jenner supporting tonight to his Instagram story, with a big fat diamond ring sitting on her left ring finger. Elite Daily reached out to both Jenner and Scott’s teams for comments, but didn’t hear back by time of publication. Wait, bible, I’m confused — did the it-couple get engaged backstage and out of sight of our wandering eyes? Because if so, can I just say: Rude!!! 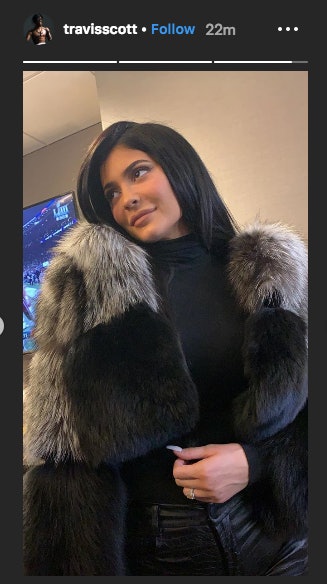 All jokes aside, tonight would be the perfect night for Jenner and Scott to make their hubby-wifey status official. A year ago to this day, the couple announced the birth of their firstborn child, daughter Stormi Webster, in a touching video tribute. Given the fact that the two just celebrate Stormi’s first birthday with touching Instagram celebrations and a romantic family getaway, it’s no wonder that the internet has literally been holding their breath, waiting for their viral Mom and Dad to put a ring on it.

Real talk: If Jenner and Scott did get engaged, it probably wasn’t tonight. Why? Jenner posted a video to her Instagram story yesterday of the star getting ready for an event, in which she is pictured wearing the same ring. Does this mean she’s not engaged? No way, José! But it does probably suggest that if a big proposal was in the cards, it probably didn’t go down tonight. Phew! That’s honestly a relief — I was beginning to think that my invite to the real Super Bowl party got lost in the mail. 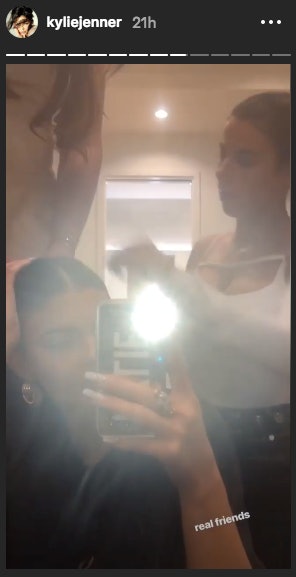 Apparently, I’m not the only fan that’s completely confuzzled right now. Her followers took to twitter to speculate about the MVP ring — and not the one that tonight’s Super Bowl winners are bound to take home.

Regardless of whether or not Scott popped the question tonight, last night, or in our (*cough* my) dreams, one thing is for certain: With Jenner by his side, and Stormi adorably giggling while she watches her "dada" perform (she is seriously the cutest! MVP of tonight), Scott will be stepping off the field a big winner. How does the old saying go? It doesn’t matter if you win or lose, it’s how you propose in public, in front of millions of viewers, only on E!? Yeah, I think that’s the one. Whatever happens, it’s sure to be a total #touchdown.