Bars and restaurants will take their operations to the streets this summer, under a multi-million dollar package designed to prop up Melbourne's hospitality sector.

Funding will also be available to run events and cultural activities safely, offering a much-needed salve to Melbourne's arts community. 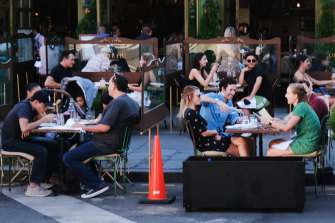 The plan for Melbourne is based on New York’s Open Restaurants scheme.Credit:Getty

Premier Daniel Andrews on Monday said a $100 million city recovery fund, jointly funded by the City of Melbourne, would offer practical support to small and medium-sized business, and the arts and cultural communities.

"The $100 million to support the city, given the unique burden it carries, is a very important partnership and one that will make a real difference as we push through this and get to the other side," Mr Andrews said.

"If you look at places like New York, they have been able to get their hospitality sector back to something approaching normal, faster than what would otherwise have been the case because they have used the footpath and kerbside parking and taken public space and turned it into pop-up cafes, restaurants, bars.

"That is what we will do. We will change the way the city operates and the suburbs and regional cities."

The outdoor dining policy was modelled on New York's Open Restaurants initiative, which is credited with helping 9500 restaurants and cafes keep afloat during COVID-19 restrictions.

There, indoor dining is banned but footpaths, lanes and even some streets have been transformed into open-air bars, cafes and restaurants.

Mr Andrews confirmed some streets and lanes will be closed to allow for outdoor dining and drinking.

The Premier said the state government was keen to avoid unnecessary "bureaucratic delays" in allowing businesses to move their operations outside.

"I say to local government across the board, we are happy to support you to expedite the planning arrangements here, but there needs to be some urgency with this," he said.

"We don't want bureaucratic delays. We don't want arguments and debates. We want as many people seated in as quick a time as possible, utilising public space that has never been on offer previously because that is unprecedented because this challenge is absolutely unprecedented."

Industry Support and Recovery Minister Martin Pakula said grants would be made available to 16,500 businesses in the city, which employ some 470,000 people.

Outside the CBD, a further $87.5 million outdoor hospitality support package will offer support to suburban hospitality businesses for training, advertising and practical support to help them move onto footpaths and lanes.

The city recovery package was welcomed by lord mayor Sally Capp, who has been lobbying for greater direct support for the CBD's businesses, which have suffered far greater financial pain than suburban businesses.

Modelling conducted by PWC and released last week predicted inner Melbourne could lose 79,000 jobs annually, and bleed more than $110 billion in revenue over the next five years, as the COVID-19 recession savages the central city.

It showed the Andrews government's decision last month to move from stage three to stage four restrictions will cost the city's economy $61 billion over five years – although the modelling did not take into account the economic or health impacts of a worsening pandemic.

Job losses across Victoria have already far eclipsed the height of the 1990s recession and are projected to hit almost 400,000 annually over five years.

The PwC modelling predicted 22,900 jobs will be lost in Melbourne's accommodation and food services sectors alone this year, equivalent to $1.99 billion in forgone revenue.

Under the government's plan to leave lockdown, hospitality businesses will be able to reopen for limited dining and retail businesses will reopen from October 26 if the 14-day COVID-19 case average has fallen to five or fewer, with no more than five cases of an unknown origin.

Restaurants and bars will be able to apply for funding for outdoor seating, and screens to separate dining areas, and set up their operations on footpaths and some streets in the CBD.

Funding will also be made available to help small- and medium-sized businesses be "COVID safe", and to run cultural activities and events safely.

Before Melbourne's rolling lockdowns first took effect, almost 1 million people travelled into a bustling CBD each day. Last month the number of pedestrians travelling into the city centre fell by 90 per cent.

The effect on businesses has been devastating. With foot traffic mostly gone, the City of Melbourne estimates retail vacancy rates will rise from 3 per cent before lockdown to 7 per cent.

On Saturday, Mr Andrews predicted this would be a "summer like no other", as Victorians come together in the knowledge cthat oronavirus case numbers had been beaten down.