Texas Governor Greg Abbott’s announcement on Tuesday to lift statewide COVID-19 restrictions was met with criticism from doctors and some local officials who say it comes too soon in the fight against the virus.

“What I see here is a premature and misguided discussion putting our community at risk, and it’s unnecessary because we’re headed where we need to go,” said Harris County Judge Lina Hidalgo.

Abbott said in a statement Tuesday that while COVID-19 has not disappeared, state mandates are no longer needed due to vaccinations, reduced hospitalizations and “safe practices that Texans are using.” He announced an executive order that lifts the statewide mask mandate and increases the capacity of businesses and facilities to 100%.

“It’s just that now state mandates are no longer needed,” he said at a press conference.

“You think just because the governor does this, it makes the virus go away?” Turner said. “Every time we start moving in the right direction, the governor steps in and sets us back and makes all of our jobs harder. He minimizes the sacrifices of people and businesses. I just don’t get it.”

Austin’s mayor, Steve Adler, said, “Experts tell us masking is the best tool we have to open schools to all person to keep businesses open and now the governor’s action has put those at risk.”

Mississippi Governor Tate Reeves also announced on Tuesday that he is ending the state’s mask mandate. Mississippi and Texas join a dozen other U.S. states that do not currently have statewide mask mandates. 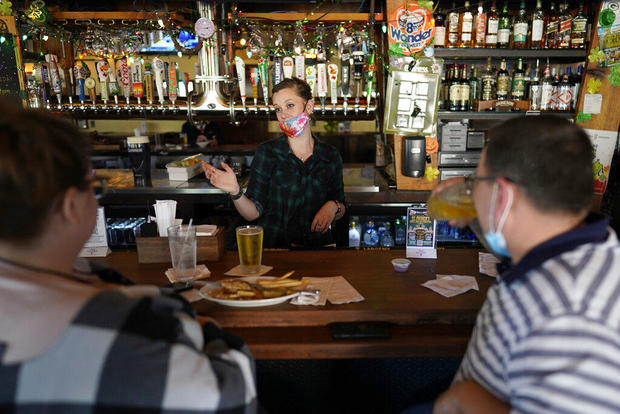 Dr. Neeta Ogden, an allergist and spokesperson for the American College of Allergy, Asthma, and Immunology, called the moves “wildly premature.”

“We know there are more transmissible variants in the United States that have proliferated very quickly in other parts of the world and it’s simply not the time to relax these measures,” she said on CBSN on Wednesday.

“Yes, we are on the cusp of a change with the coronavirus,” she said. “That kind of end is in sight but it’s still too early.”

More than 78 million COVID-19 vaccine doses have been administered across the U.S., according to the Centers for Disease Control and Prevention. But the country still has a long way to go with vaccinations.

Ogden said hard-earned progress made fighting the virus could be lost without the proper guidance and restrictions in place.

“I think it is a little too early for them to be taking away these mandates, and they need to be really clear about what is still going on with the coronavirus rather than just vaguely talking about personal responsibility. I think things need to be spelled out better,” she said.

“A large part of this country is still not vaccinated,” she said. “Coronavirus loves that. It is easily infecting people and transmits very easily, especially these variants.”

Others, however, celebrated Abbott’s decision.

“It’s been a long time coming,” Montgomery County Judge Mark Keough said in a video posted on Facebook. “We can’t have a healthy community without a healthy economy.”