The mother-of-four was killed in a freak accident in July.

An inquest into Mrs Roberts death has heard the dogs that accidentally choked her to death were not even on their leashes at the time.

One of the men who discovered the body told the hearing that when he found her, the loops that normally go around the dog’s necks were around her neck instead.

While assistant coroner David Pojur told the court “we don’t know” why she had placed the leashes around her own neck, the family had informed investigators that she normally hung them there while walking with the dogs off the leash, presumably to free up her hands.

The inquest heard Mrs Roberts had been walking with her young niece, when it’s believed she tripped and fell. Suffering from Huntington’s disease, which increasingly affects mobility, she may have struggled to get back up.

The niece ran to get help, finding two warehouse workers nearby.

“I noticed a young girl running towards me crying, saying ‘can you help me, someone is choking’,” one said in his statement.

He said the two dogs were pulling backwards with the leashes in their teeth, with enough force to move the lifeless body.

Her son Robert told the inquest the dogs — Staffordshire bull terriers named Ruby and Tyson — were “loving and caring pets” who were likely just trying to help their mom back to her feet.

“They are beautiful dogs. If you met them now they’d just jump up and lick you,” he said. “All they were doing is trying to help my mum when she fell.”

The coroner ruled the fatality an accident, with cause of death asphyxiation caused by strangulation by a lead.

A UK mother-of-four was strangled to death by two dogs after their leashes became entangled around her neck.

The freak accident occurred on July 8 in Wrexham, north Wales when 47-year-old Deborah Mary Roberts was walking the canines with a young girl.

An inquest into her death heard that two men where working nearby when the girl ran to them to tell them her friend was choking and needed help. 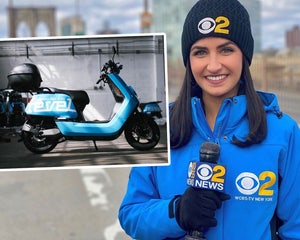 They followed her to the popular dog walking spot where they found Roberts facedown in the grass, unconscious, with the dogs pulling on the leashes wrapped around her throat.

Paramedics rushed to the scene but were unable to save her.

John Gittins, senior coroner for North Wales East and Central, told the inquest that after postmortem examination, the provisional cause of death was asphyxia due to strangulation.

He said there was no evidence of suspicious circumstances; the inquest has been adjourned to a future date yet to be set.

The breeds of the dogs have not yet been revealed; however Robert’s Facebook page lists her as a fan of Staffys, or Staffordshire Bull Terriers.

“My brothers and I are so overwhelmed by all the lovely comments about my mum, she really was one of a kind and we’ll miss her so much,” Callum, one of Deborah’s four sons wrote on Facebook.

Deborah will be cremated on Wednesday.