Doreen Spooner was already well known on Fleet Street, recognized as the first woman to become a full-time staff photographer for a British national newspaper. Then came the picture of two saucy showgirls that she snapped surreptitiously from the ladies’ loo in a London pub in 1963. It landed on front pages around the world.

Ms. Spooner gained her vantage point by squeezing past a scrum of journalists outside Henekey’s Long Bar, masquerading as an ordinary customer on the arm of a colleague.

Opening the restroom door a crack, she got a shot of the two women, Christine Keeler and Mandy Rice-Davies, sharing drinks on the day they were to testify nearby at the Old Bailey, London’s central criminal court, in the explosive sex scandal surrounding John Profumo, the British secretary of state for war, and a Soviet diplomat. Ms. Wheeler and the married Profumo had had a sexual relationship, and the scandal would help topple Britain’s Conservative government. 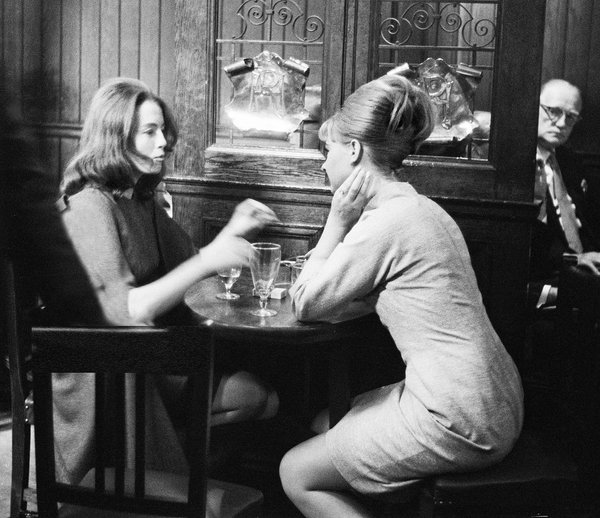 Just before Ms. Spooner was ejected, she had secreted the film in her coat pocket in case her camera was confiscated.

“Right there in my lens I’d seen it — Christine Keeler, eyes down, fragile, and Mandy Rice-Davies looking straight ahead in a cocky blond beehive,” Ms. Spooner told The Sunday Mirror in 2016. “I knew in my gut I’d got it. I’d got the contrast of personalities. It raised my stock no end.”

Ms. Spooner died on April 20 in Esher, a town in Surrey, southwest of London, her family said. She was 91.

She spent most of her career at The Daily Mirror, which she joined in 1949. At the time, most women who worked there were typists or tea ladies; the sweaty and smoky macho newsroom, she said, evoked “a Spanish bull ring.”

When her photo credits in print initially read “By Camera Girl Doreen Spooner,” she was not amused. “That was a bloody cheek,” she said. “I think they thought it endearing, but I wasn’t having it.” But she apparently changed her mind; “Camera Girl” was the title of her memoir.

Even in the 1960s, Fleet Street was still, in Ms. Spooner’s words, “Testosterone Alley.” (“So what will you be doing then, dear? Typing?” one staff photographer asked.) Overall, however, she said, she encountered relatively little sex discrimination in her career — and relatively little deference.

“You cannot expect the men to turn ’round and say, ‘After you, dear,’” she said. “It is a competitive world, and you are out there competing, and the photographer’s sex makes not an atom of difference. Don’t put on the ‘weaker sex’ act — it will not work.”

Still, she said, “I like to think I played a small part in changing attitudes, never waving a feminist flag, just by getting on with my job.”

Doreen Beryl Spooner was born on Jan. 30, 1928, in North London to Len and Ada (Tribe) Spooner. When she was 8, her father, who was picture editor of The Daily Herald, bought her a cheap camera at Woolworths. She was soon hooked on photography.

“For me the idea of starting every day at 9 and finishing at 5, between the same four walls, was neither inviting nor exciting,” she told The Photographic Journal, published by The Royal Photographic Society, in 1990. She was a fellow of the society.

After being evacuated from London during World War II, she returned to attend Hornsey Grammar School until she was 16. She studied at the Bolt Court School of Photography, and after her photos of reindeer in Lapland were published in Picture Post magazine, she found her calling. The Keystone Picture Agency took her on.

She was hired away from Keystone in 1948, when The Mirror started its own agency, but it was unprofitable and short-lived. Three of the agency’s 10 photographers — including Ms. Spooner — were offered jobs at the paper itself.

Within a few months, her photograph of the playwright George Bernard Shaw at his garden gate won the British News Picture of the Year award. She also took a celebrated portrait of Princess Elizabeth and photographed the Duke of Windsor when he was promoting his book “A King’s Story” (1951).

She did not warm to the duke’s wife, the former Wallis Simpson, who snapped at him for calling their lap dog Tom-Tom instead of Thomas.

“It seemed to me the duchess had two lap dogs,” Ms. Spooner said.

Ms. Spooner left The Mirror in the early 1950s to freelance in the United States, spending three months there shooting with Bert Garai, the founder of Keystone, and then in Paris, where she worked for the Keystone and Magnum photo agencies. There she reunited with the Magnum photographers Henri Cartier-Bresson and Robert Capa, whom she had met when they worked with her father.

In 1952, she married Pierre Vandeputte-Manevy, a photographer with the newspaper Le Figaro. They moved to London in the late 1950s and raised their three children there. When she discovered that her husband, who was an alcoholic, had all but bankrupted the family, she returned to The Mirror, in 1962, and remained there until she retired in 1988.

The couple divorced in 1978. Mr. Vandeputte-Manevy died in 1981. Ms. Spooner is survived by their two daughters, Jeanne and Catherine; three grandchildren; and five great-grandchildren. Their son, Tony, died in 2015.

At The Mirror, Ms. Spooner’s subjects included a sullen Sophia Loren, who was fending off Italian tax collectors at the time (“I did the job and got the hell out of there before she erupted and threw a plate of spaghetti,” she once recalled), and the sylphlike model Lesley Lawson, better known as Twiggy. (“It was simply impossible to take a bad photograph of her,” Ms. Spooner said.)

She also personally chastised Prince Philip, whom she was accompanying during a trip to Asia in 1986, after he notoriously told a group of British students that they would “go home with slitty eyes” if they remained in China much longer.

While her equipment ranged from a Speed Graphics camera with glass plates to a 35-millimeter Nikkormat (she retired before the digital revolution in photography gained speed), her profession’s chief challenge remained unchanged for her. “It’s easy to take photos,” she wrote in “Camera Girl,” “but so much harder to get a ‘picture,’ an image that somehow captures the essence of the people in the frame.”

In the 1970s, when Rupert Murdoch’s tabloid The Sun, with its Page 3 photographs of topless women, began gaining circulation, The Mirror responded by emulating that racy feature and enlisting Ms. Spooner to take its pictures. The models rarely objected. As a colleague recalled, one model explained it this way: “You never mind getting your kit off for Doreen. It’s like undressing in front of your granny!”

Sam Roberts, an obituaries reporter, was previously The Times’s urban affairs correspondent and is the host of “The New York Times Close Up,” a weekly news and interview program on CUNY-TV. @samrob12