Almost 40 federal prosecutions could be shelved as the federal government warns the union-hunting construction watchdog to “significantly” wind down its operations to avoid wasting taxpayers’ money.

The doomed Australian Building and Construction Commission has 36 outstanding cases against unions, including allegations of death threats during a picket line, while facing claims it is a politicised body that launches illegitimate actions. 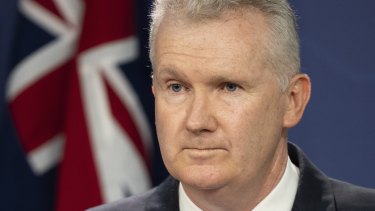 Employment and Workplace Minister Tony Burke expects the ABCC to “wind down” its operations.Credit:Alex Ellinghausen

Workplace Relations Minister Tony Burke said the commission shouldn’t receive public funding following its pursuit of the Construction, Forestry, Maritime, Mining and Energy Union (CFMMEU) in a case that prompted the Federal Court to ban the display of the Eureka flag.

“I’m expecting them to start winding down their operations significantly,” Burke told The Sydney Morning Herald and The Age.

“And there’s an expectation that any organisation, any statutory body or anybody at all, is going to be responsible with taxpayers’ money and not wind up any bill they can’t afford to pay.”

One current prosecution against the controversial construction union has been delayed until November, with the judge questioning whether the case should continue, after the Federal Court heard two of the watchdog’s witnesses had potentially breached the law. 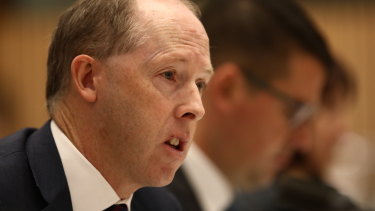 ABCC commissioner Stephen McBurney will continue his role until it is scrapped by legislation.Credit:Dominic Lorrimer

One witness, a former worksite manager, elected to continue giving evidence during a hearing last month with a certificate protecting against self-incrimination after admitting to deliberately trying to block a union official’s right of entry.

The union’s national construction division secretary Dave Noonan said the case marked the latest “in a series of false allegations against the union that have fallen apart in court”.

Another ongoing matter, in which union members were accused of threatening workers crossing a waterfront picket line in Fremantle with death, prompted maritime division WA secretary Will Tracey to allege the watchdog was “compulsively bringing cases without evidence or justification”.

“All of the evidence available to both sides completely disproved their version of events,” he said. 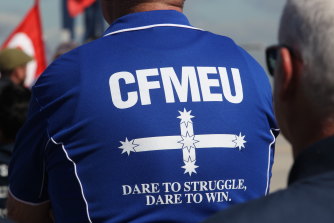 Members of the CFMMEU have been persistently targeted by the construction watchdog.Credit:Peter Braig

However, earlier this month the Federal Court fined the CFMMEU and three officials a combined $840,000 after the ABCC prosecuted them for coercive action at Brisbane construction sites last year.

Labor went to the election promising to abolish the commission, with Burke previously confirming it would be defunded this financial year. But, as a statutory authority, its removal will have to be legislated and its passage through the Senate is not guaranteed.

The ABCC has 39 prosecutions afoot, 23 new legal matters introduced in the past financial year.

Asked what he expected the watchdog to do with the cases, Burke replied: “An agency that has been wasting taxpayers’ dollars on policing what flags are displayed on worksites and what stickers are on workers’ helmets shouldn’t continue to receive taxpayers’ dollars.”

The Federal Court in March upheld the commission’s pursuit of the union and builder Lendlease for flying the Eureka flag on worksites, in an appeal decision that is now the subject of further appeal.

The commission declined to comment on Burke’s stated expectation, instead referring to a June 23 report in which it pledged to continue investigating and prosecuting matters until it was abolished.

“Absent a change of legislation, legal proceedings will continue through the courts as normal,” the report says.

The Master Builders’ Association, with campaigned vigorously for the retention of the agency during the federal election, declined to comment.

The Coalition’s industrial relations spokeswoman, Michaelia Cash, said Burke needed to explain what would happen to the dozens of live cases.

“These matters can’t just be dropped – there are serious allegations involved that must be dealt with,” Cash said.

“This is exactly the sort of chaos we predicted would ensue under a Labor Government. They are once again putting their union mates ahead of law and order in the building and construction industry.”

But Adelaide University industrial relations expert Andrew Stewart said it was difficult to believe the government was going to behave as if the ABCC had been abolished “when it still exists legally”.

“The answer here is it’s going to be something in between,” he said.