The outgoing defence minister is firming as the frontrunner for the Liberal leadership after the party lost Saturday’s election, with vicious swings in Victoria costing high-profile MPs, such as Josh Frydenberg, Katie Allen and Tim Wilson, their seats. 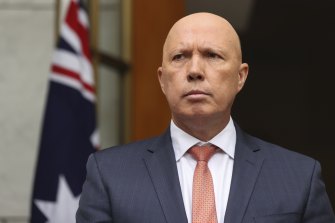 Peter Dutton is considered by some moderate Liberals as too conservative to lead the party.Credit:Alex Ellinghausen

The Liberals did badly, but Labor MPs also noted a drop in support for their party in some outer-suburban electorates, something it will need to address before November.

Asked if he would welcome Dutton to the state in the lead-up to the election, Guy said on Monday: “Any federal Liberal leader, I will campaign with.”

One Liberal insider said Dutton was “toxic” in Victoria and other party operatives agreed. But that view was not shared by all moderate Liberals, with some describing him as a pragmatist.

Senior Victorian Liberal moderate David Davis said he worked successfully with Dutton in 2013 to push the then-Gillard government to reinstate $107 million in health funding for Victoria.

“He was a strong supporter in our campaign to restore funding to Victoria that had been cut to our budget by Tanya Plibersek and the then-Labor government.”

Moderate Liberals fear the party will lurch further to the right under Dutton and lose the voters who abandoned the Coalition on the weekend forever. 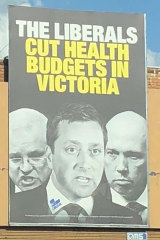 A 2018 Victorian Labor campaign ad featured federal Liberal figures alongside state leader Matthew Guy after research showed they were unpopular in the state.

One state Liberal MP, who spoke on the condition of anonymity, said the state opposition should not be tempted to move away from its current strategy, which is focusing on the healthcare crisis and what they say is the Andrews government’s financial mismanagement.

Guy pointed to swings against Labor in outer-suburban seats as proof of anti-Andrews sentiment.

“There is a lot of frustration within the electorate and also a desire to change,” Guy said. “Not just the previous federal government but also with the state Labor government.”

“Double-digit swings in growth areas … against the Labor Party can’t be ignored.”

During the 2018 state election, Labor ran ads featuring Scott Morrison, Peter Dutton and Tony Abbott linking them to Malcolm Turnbull’s downfall after research found it had a negative impact on the Liberal brand.

Labor also seized on inflammatory comments made by Dutton that Victorians were scared to go out to restaurants at night because of African gang violence.

Despite winning the federal election, Labor members are warning their colleagues against complacency and say the mood for change in Victoria is widespread.

Several Labor strategists have warned that independent Dai Le’s trouncing of Kristina Keneally in the safe Western Sydney seat of Fowler could be replicated in Victoria’s election.

Former NSW premier and senator Keneally was parachuted into the formerly safe Labor seat but was easily beaten by Le, a veteran Fairfield councillor and former refugee.

Labor strategist Kos Samaras said Labor should take heed of the result in Fowler, a multicultural electorate that bore the brunt of COVID-19 restrictions.

“If the Labor Party wants to treat [supposedly safe seats] as fiefdoms, just maybe those ethnic communities have a different view,” he said. “Labor needs to be very careful about installing candidates who don’t belong there and taking them for granted.”

Another senior Labor source who spoke on the condition of anonymity said Saturday night’s results will embolden locals to run as independents, and pointed to the seats of Werribee, Point Cook, Tarneit and other outer-suburban seats as prime territory to be picked up by an independent.

“If [MPs are] not going back to their electorates and changing their style, they’ve learnt nothing,” the source said.

“Those MPs need to understand what happened, analyse, reflect and then adapt. They need to stop thinking we’re a shoo-in.”