Maximum sustained winds from the storm were 50 mph (85 kph) by late afternoon as the storm moved northeast from Boston toward Maine. The U.S. National Hurricane Center said Elsa was no longer considered a tropical storm but still warned of heavy rainfall and gusty winds into Friday evening.

Elsa had been powerful enough to bring about 3.5 inches (9 centimeters) of rain to areas of Massachusetts and Rhode Island by the early afternoon, flooding streets and stranding cars. West of Boston, Framingham police said Route 9 at Route 126 was closed because of high water.

Storm conditions caused morning snags on commuter rail lines across the New York City region, with slight delays on the Harlem Line north of the city and service suspended on the Long Island Rail Road’s Oyster Bay Branch because of fallen trees.

The downpour caused a small rock slide under the main railroad track in West Haven, Connecticut, forcing trains to switch to a secondary track for a couple of hours. West Haven was also among the coastal cities dealing with significant street flooding.

The storm came a day after a deluge flooded some streets and subway stations in New York City.

Up to 6 inches (15 centimeters) of rain was possible in some areas Friday, enough to cause flash flooding. 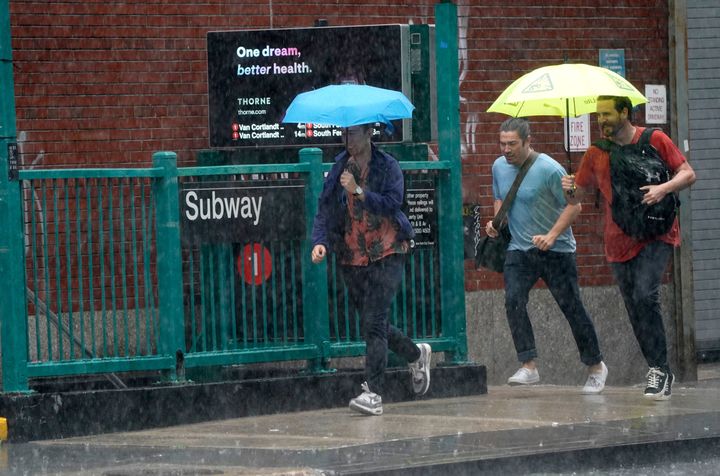 Most of the winds stayed offshore in New England but the eastern tip of Maine expected gusts of 30 mph to 40 mph (48 kph to 64 kph), raising concerns about some localized power outages. Heavy rain — including a projected 5 inches (12 centimeters) along part of the Maine coast — was expected before the storm blew into the Bay of Fundy and Canada late Friday.

Scattered power outages were being reported along Elsa’s path Friday.

The system was already blamed for one death in Florida on Wednesday. And Elsa also previously caused a damaging tornado in Georgia.

On Wednesday, nine people were injured in coastal Camden County, Georgia, when a tornado struck a campground for active-duty service members and military retirees. Eight of those hurt had to be taken to hospitals, Kings Bay Naval Submarine Base spokesperson Chris Tucker said.

The EF-2 tornado flipped over multiple RVs, throwing one of the overturned vehicles about 200 feet (61 meters) into a lake, the National Weather Service said in a preliminary report early Thursday after its employees surveyed the damage.

Authorities in Jacksonville, Florida, said one person was killed Wednesday when a tree fell and struck two cars. The Naval Air Force Atlantic Office on Friday identified the person who was killed as Aviation Ordnanceman Airman Deshawn Levon Johnson, 26, of Virginia.

In South Carolina, a Coast Guard Air Station Savannah crew rescued a family that became stranded Wednesday on Otter Island after their boat drifted off the beach. The group was flown to a hospital in good health, a Coast Guard news release said.

The National Weather Service in Morehead City, North Carolina, tweeted that a tornado was spotted near Fairfield on Thursday afternoon.

Elsa is the earliest fifth-named storm on record, said Brian McNoldy, a hurricane researcher at the University of Miami.