An advertising campaign shot by acclaimed fashion photographer Rankin has been labelled ’embarrassing, stupid and sexist’ by online critics.

The ad, from Germany’s transport ministry, features the slogan ‘Looks like s*** but saves my life’ alongside images of scantily-clad models wearing nothing but a helmet and their underwear.

But critics have claimed the messaging is sexist, and accused the transport minister of using nudity to promote his policies.

Maria Noichl, chairwoman of the Social Democratic Party of Germany, told the country’s Bild am Sonntag newspaper that the adverts must be removed, and said: ‘It is embarrassing, stupid and sexist for the transport minister to be selling his policies using naked skin.’

The adverts have sparked sexism rows online, as some question the use of models in their underwear to promote government policy

The images were taken by Rankin, a prestigious British fashion and portrait photographer who has worked with the likes of Kate Moss and Naomi Campbell.

The adverts were due to launch across cities in Germany over the coming weeks, and feature shots of model Alicija Köhler, a competitor in the TV show Germany’s Next Top Model, sporting a violet coloured helmet and a lacy bra.

Noichl went on to tell the Passauer Neue Presse newspaper: ‘Taxpayer money should not be spent to put half-naked women and men on posters.’

Some social media users were also critical of the adverts,  which feature models posing in lingerie

Other politicians, including family minister Franziska Giffey, also hit out at the transport minister, Andreas Scheuer, of the conservative CSU party.

She took to Facebook to post a photo of herself dressed in a business attire with her bicycle, writing: ‘Dear Andreas Scheuer: fully dressed also goes well with a helmet!

But British photographer Rankin, who captured the images, defended the campaign, telling the MailOnline: ‘If you look at the campaign in it’s entirety, it’s quite obviously a parody intended to create debate (and maybe a little controversy) around a very important issue. The fact we’re all discussing it, means it’s working!’

Transport minister Scheuer also defended the adverts, and said it would attract young cyclists to wearing a helmet. 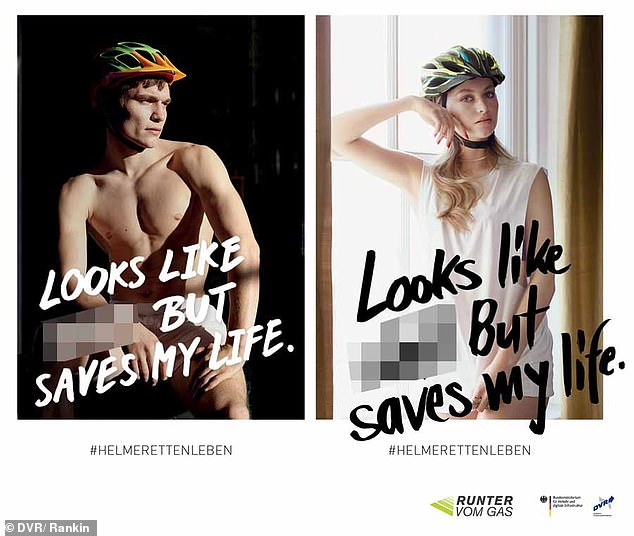 The adverts feature models posing in their underwear in a series of photographs, alongside the slogan ‘Looks like S*** but saves my life’

He said: ‘With our new action, ‘looks like sh*t. But saves my life,’ therefore, we target specific young people in order to motivate them to put on a helmet for their own protection.’

The ads were also defended by a transport ministry spokesman, who told AFP: ‘A successful road safety campaign should jolt people and can be polarizing.’

Twitter users were divided over the adverts, with some questioning whether younger people would be convinced to wear a helmet by the campaign.

They shared their views under the hashtag #Helmerettenleben, which translates to ‘helmets save lives’.

There was debate online over whether the adverts were sexist, with one even calling those complaining ‘irate little worms’

Another was unsure about whether rider safety was all down to the cyclist wearing a helmet, commenting: ‘Leaving aside the obvious misogynistic campaign. The message shifts the responsibility on the people riding the bike rather than the auto driver.

‘It morally protects them by blaming the rider not wearing helmet.’

However, others defended the campaign, with one writing: ‘There is nothing wrong with the advertising strategy used for bicycle helmet safety in Germany.

‘I know what I’d do to these irate little worms that feel the need to complain about everything and anything until they get their own way.’