Chris Pratt may be a loyal star of two of the biggest movie franchises of the moment, between Marvel and Jurassic World, but even he sometimes craves something different.

“I heard the grumblings that people were getting tired of those things,” said Pratt in a recent interview. “I felt inclined to try to do something original.” 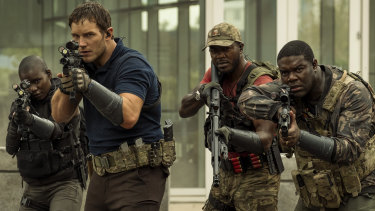 That’s when Zach Dean’s script for what would become The Tomorrow War, which debuts on Amazon Prime Video on Friday, ended up in his hands. It wasn’t based on a toy or a comic book or a theme park ride. There was no “brand” attached to it or even a bestseller sticker.

Then titled Ghost Draft, it was a dark and emotional sci-fi action epic about a generation of people who get drafted to go 30 years into the future to fight a losing war against aliens. And production company Skydance was already on board.

But they needed a name, and Pratt has found himself in a rare position in Hollywood where his involvement alone can get a movie off the ground. So, he attached himself to star as Dan Forester, a scientist and father of a young daughter, who gets drafted for the dangerous mission. Pratt also decided he’d serve as an executive producer for the first time, too, meaning he got to be involved in casting, script notes and some creative decisions. 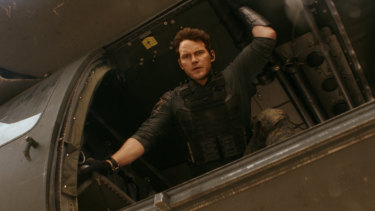 Chris Pratt is in the rare position of being able to get a movie made just by attaching his name to it.Credit:Amazon

And there was a problem they needed to deal with immediately: Ghost Draft was way too dark.

“It was Children of Men and then some,” said director Chris McKay.

“It made Children of Men look like a comedy,” Pratt added.

If they were going to get more than $20 million to make it and feasibly attract the whole family to a theatre, they’d need to lighten it up a little: Less hopeless dystopia, more Independence Day.

It’s part of the reason McKay, who directed three series of offbeat animated hit Robot Chicken, as well as The LEGO Batman Movie and cast people like Veep’s Sam Richardson, Mr. Show’s Mary Lynn Rajskub and The Birthday Boys’ Mike Mitchell in supporting roles. They are, he said, “comedy generators.”

“I like movies like Aliens where you’ve got suspense, you’ve got action, but you’ve also got people who are having real human reactions to things and there’s situational or character-based humour,” McKay said.

And there’s the dramatic element of the family stakes with an estranged father (J.K. Simmons) and a loving family (Betty Gilpin and Ryan Kiera Armstrong) he’s leaving behind unwillingly. For McKay, who is making his live-action directorial debut, the opportunity to blend scope and heart was a dream.

“I was a genre kid. I grew up on John Carpenter, Steven Spielberg, Joe Dante, George Miller, Kathryn Bigelow, James Cameron. Those are the movies that made me want to be a filmmaker,” he said. “(This) has a scale of the kinds of things that I loved as a kid.”

And he and Pratt got to go all-out, having their “Star Wars in Tunisia” moment, shooting on location on oil rigs and glaciers instead of primarily on studio lots in front of green screens. It didn’t make things any easier on them: In Iceland, they got the distinction of being the first people ever to put a crane on one of the glaciers, only feet away from a particularly harrowing cliff’s edge with a 900 metre drop. But they hope it gives the film a different feel from something entirely generated on the computer.

If it seems a little epic for a streaming service, it’s because it is (or at least an outlier). The Tomorrow War was, up until the post-production phase, going to be a big theatrical release from Paramount Pictures. But like many studio films during the pandemic, it was sold to Amazon (this one in a deal worth a reported $US200 million).

McKay said great pains were taken to ensure the sound mix and colouring would feel as close to a theatrical release as possible. He likes that Amazon subscribers all over the world will have immediate access to it Friday.

Pratt is back in Los Angeles with his wife, Katherine Schwarzenegger, and 10-month-old daughter after spending much of last year shooting Jurassic World: Dominion in the UK. And he’s proud of The Tomorrow War and being in a position to help films that he wants to see get made.

“I feel a little bit more like it’s my baby in a way than I do on other films,” he said.

“For so long, any role that I got was the result of someone else saying yes to me. Now I’m in this rare space where if I’m doing a role, it’s because I’ve said yes. And that is really cool. And I don’t know how long that will last or when it will end, but until it does I’m going to do the things that I want to do.

“And this is a perfect example of the kind of thing that I wanted to do. It’s big and commercial. And it’s fun and it’s moving,” Pratt added. “We want to make big a big splash and we want people to think that this is the coolest movie they’ve seen in years. And I think that’s what we did.”