The original Christmas ad was released over a decade ago, and featured a wee boy drinking Irn-Bru with the Snowman as they flew across the country. 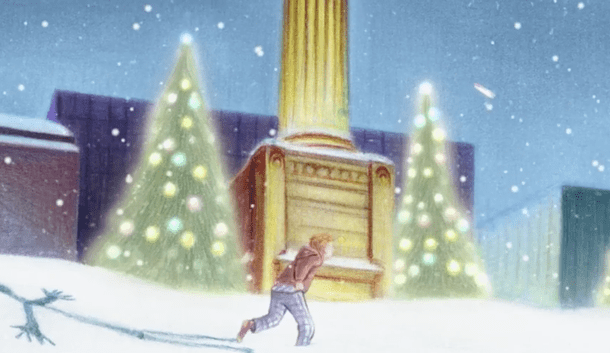 This year's ad tells the story of a wee boys’ quest to get his Bru back, flying a plane in a bid to catch up with the Snowman that stole his can.

The ginger boy manages to catches up with the thieving Snowman and grab the Bru.

But in the last few seconds, Santa swoops in on his sleigh to snatch the can and soars off, leaving the boy and the Snowman behind.

The ad was released over the weekend, and viewers are so far really positive, while many also see the launch of the ad as the official start of Christmas.

But many are still negative about the fizzy drink's new recipe, which was rolled out earlier this year.

The new taste was a result of the company's "long-standing sugar reduction programme", and saw Int-Bru bosses slashing the drink's sugar content from 10g per 100ml to just under 5ml.

It was then thought to be a reaction of Chancellor Philip Hammond's new sugar tax – which came into force in April this year.

Many fans, including Lorraine Kelly, haven't enjoyed the change in taste, while some drinkers can't tell the difference.

Despite fierce competition from brands such as Coca-Cola and Pepsi, Irn-Bru remains Scotland's best-selling soft drink.

In the year to January, sales of the fizzy drink hit record levels, with its Irn-Bru Xtra no-sugar version selling the equivalent of 60million cans across the UK.

Earlier in May this year, Donald Trump banned Irn-Bru from his Scottish golf resort because it could stain the carpets.

Meanwhile, research claims to show that the origins of Scotland's other national drink Irn-Bru began in the US.

Last week, a rare 50p coin featuring a colour design of The Snowman has sold for £195 on eBay – more than three times its value.