While the pandemic has tried its hardest to derail catch ups, chances are at some point this holiday season, you will find yourself at a BBQ (or worse, waiting 15 minutes for a Rapid Antigen Test) when talk turns to a television series you’ve yet to watch. 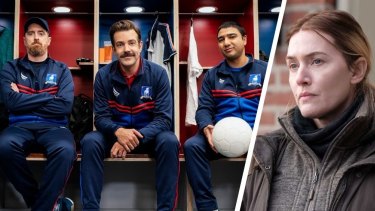 Rather than reveal yourself as a pop culture pariah and risk being left out of future conversation, use our handy cheater’s guide to fool your friends and family.

Need to know info: Kate Winslet plays a rough around the edges cop in Philadelphia investigating the murder of a young girl.

Mare of Easttown received plaudits for Winslet’s warts-and-all portrayal of middle age. The actor even told the New York Times she refused her director’s offer to edit out footage of her “bulgy bit of belly” from a sex scene.

Expert level trivia: While brainstorming ways to better connect with her character and where she was going, Winslet subscribed to the Delco Times, a local daily newspaper in Delaware County.

Need to know info: HBO drama about a super-rich media family (picture the Murdochs, but worse), where all the children are fighting to take control of the company.

Conversation starter: “There’s definitely something homoerotic going on between Greg and Tom, don’t you think?”

Two of the show’s most loved characters, Tom Wambsgans and Greg Hirsch, have a strangely close relationship, and fans love to dissect what’s going on beneath the surface. 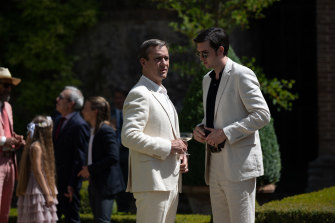 Expert level trivia: Will Ferrell is an executive producer on Succession. Use this as a jumping-off point to talk about everyone’s favourite Will Ferrell films.

Need to know info: The entire series spans a single week as we follow the adventures of a bunch of rich people staying at a five-star Hawaiian resort.

Conversation starter: “I don’t know about you, but I still can’t get over that suitcase scene!”

In one of the most memorable scenes from The White Lotus, the out of control hotel manager Armand (Murray Bartlett) defecates in a guest’s suitcase, the ultimate act of revenge. 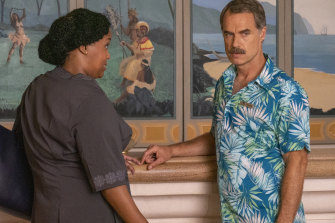 Australian actor Murray Bartlett was unforgettable as the hotel manager in The White Lotus.Credit:HBO/Foxtel

Expert level trivia: The White Lotus was filmed amid the pandemic; the cast entered a COVID bubble and shot the entire series in one go at the Four Seasons resort in Maui.

Need to know info: Ultra-violent South Korean Netflix series about people who complete in deadly contests for a chance to win a grand cash prize.

Conversation starter: “Be honest: who at this BBQ would make the top two in a real-life Squid Game?”

Over the course of nine episodes, all the contestants are whittled down until only two remain. Throw this hypothetical out to the crowd and then nod enthusiastically as they explain why they’d be most likely to win. 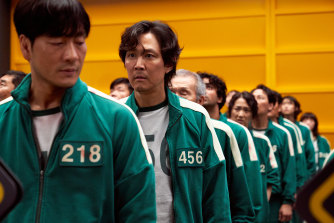 Park Hae-soo and Lee Jung-jae in a scene from the Netflix series Squid Game. Credit:Netflix

Expert level trivia: The bright-green tracksuits worn by contestants in the show were inspired by the gym uniform that director Dong-hyuk wore in high school.

Need to know info: Odd couple comedy about an ailing stand-up comic Deborah Vance (Jean Smart), who attempts to revive her career by teaming up with a millennial TV writer, Ava (Hannah Einbinder).

Conversation starter: “Do you really think Ava’s tweet would get her cancelled?”

At the start of the series, we learn that Ava has been #cancelled because of an insensitive tweet about a closeted senator. You will easily buy yourself an hour of breathing room once the cancel culture conversation takes off.

Expert level trivia: The series was created by Jen Statsky, Lucia Aniello and Paul Downs. Lucia and Paul are married, and Jen officiated their wedding. The perfect non-show related trivia do drop into any Hacks chat.

Need to know info: Jason Sudeikis is Ted Lasso, a happy-go-lucky American football coach who finds himself in charge of an English Premier League soccer team, despite knowing nothing about the game.

Conversation starter: “There is no one more evil on TV than Nate: discuss.”

In the season two finale, Ted’s offsider Nate (Nick Mohammed) stabs him in the back by revealing Ted’s battle with anxiety and then quits to become the coach of a rival team.

Expert level trivia: The entire premise for Ted Lasso was based on a series of 2013 NBC Sports commercials. The network won the US broadcast rights to the English Premier League and worked with Jason Sudeikis to come up with a way to market the game to an American audience. Sudeikis created the character of Ted Lasso, and the rest is history.

Need to know info: A heart-wrenching series about a young mother who escapes a cycle of abuse and must make ends meet by working as a maid while dealing with her dysfunctional mother. 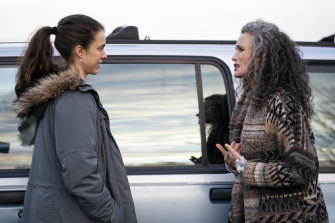 People love fun facts like this, and by focusing on a talking point that is not plot-related, you’re staying in a safe space. You can even direct the conversation to the famous mother-daughter co-stars, say Melanie Griffith and Dakota Johnson?

Expert level trivia: According to Netflix’s Top 10 website, Maid was viewed for more than 469 million hours in its first 28 days, making it the streaming platform’s eighth most-watched series of all time.