Pulling double duty! Billie Eilish returned to the Saturday Night Live soundstage as both host and musical guest, sharing her love for the holiday season.

Most Memorable ‘Saturday Night Live’ Hosts Over the Years

“Hi, how are you doing? I’m so excited to be here. My name is Billie Eilish, if you don’t know me for my music, you may know me from my hair or my clothes,” Eilish, 19, began her SNL monologue during the Saturday, December 11, episode. “That is why I decided to dress like Mrs. Claus going to the club, but actually, no, I’m only wearing this because, after the show, I gotta go get married in an anime.”

After explaining her red-and-white dress, the teenaged musician marveled about her hosting debut on the variety series. 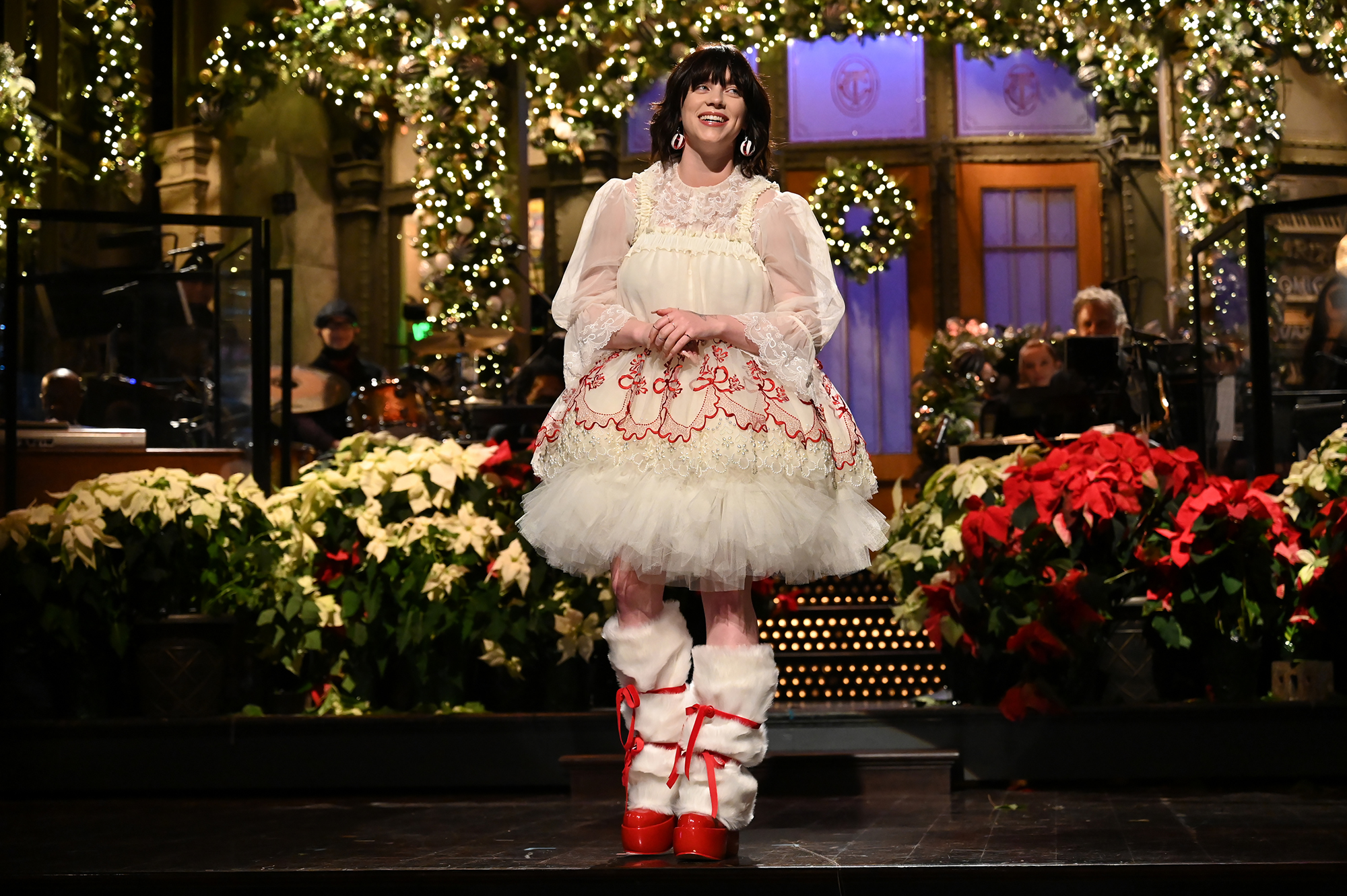 “It’s so special to be hosting in December, not only do I love Christmas — and oh my God, it’s so beautiful here at Christmas — but my birthday is one week from today,” she added. “I am turning 20, or as the internet likes to call that: middle-aged. I’m actually really excited to get older because I’m, just now, starting to understand who I actually am as a person. The scary thing about growing up in the public eye is that people decide that everything you say, and do, and look like, is who you are forever. That’s not fair. Would you want to be judged by the way you presented yourself at 16?”

After poking fun at cast member Colin Jost‘s high school yearbook photo and being her mom’s second favorite child (behind brother Finneas), Eilish took part in a variety of holiday-themed sketches about a hip-hop nativity pageant, a song about meeting Santa Claus and a “Lonely Christmas” commercial parody. A fourth sketch even enlisted the help of Miley Cyrus for a brief cameo about elaborate holiday cards.

“What better way to remind you that I met a celebrity at a restaurant 11 months ago than with my Christmas card?” cast member Punkie Johnson jokingly teased, while posing with the “Wrecking Ball” songstress, 29.

The Last Song star, for her part, quipped, “This woman came up to my table and said, ‘You’re Hannah Montana,’ and then said she hated my music. She asked for a photo and implied if I didn’t take it, it’s because I was racist.”

After previously rocking out on the NBC series in September 2019, the “Bad Guy” songstress made her hosting debut during Saturday’s episode.

The Grammy winner had been teasing her comedic appearance all week long via social media.

“SNL! SEE YOU ON SATURDAY🙃🙃🙃🙃,” she captioned Instagram footage of her episodic promo with Kate McKinnon, who jokingly gave her a heads-up about a “big secret about the world.”

News of the musician’s hosting gig was first announced in November, shortly before SNL took a multi-week hiatus amid season 47.

“AHHHHHH!!! I’M HOSTING AND PERFORMING ON SNL!!! CRAAAAZY I COULD SCREAM! @nbcsnl on december 11th!! see you then!!🥳,” the California native captioned an Instagram post at the time. 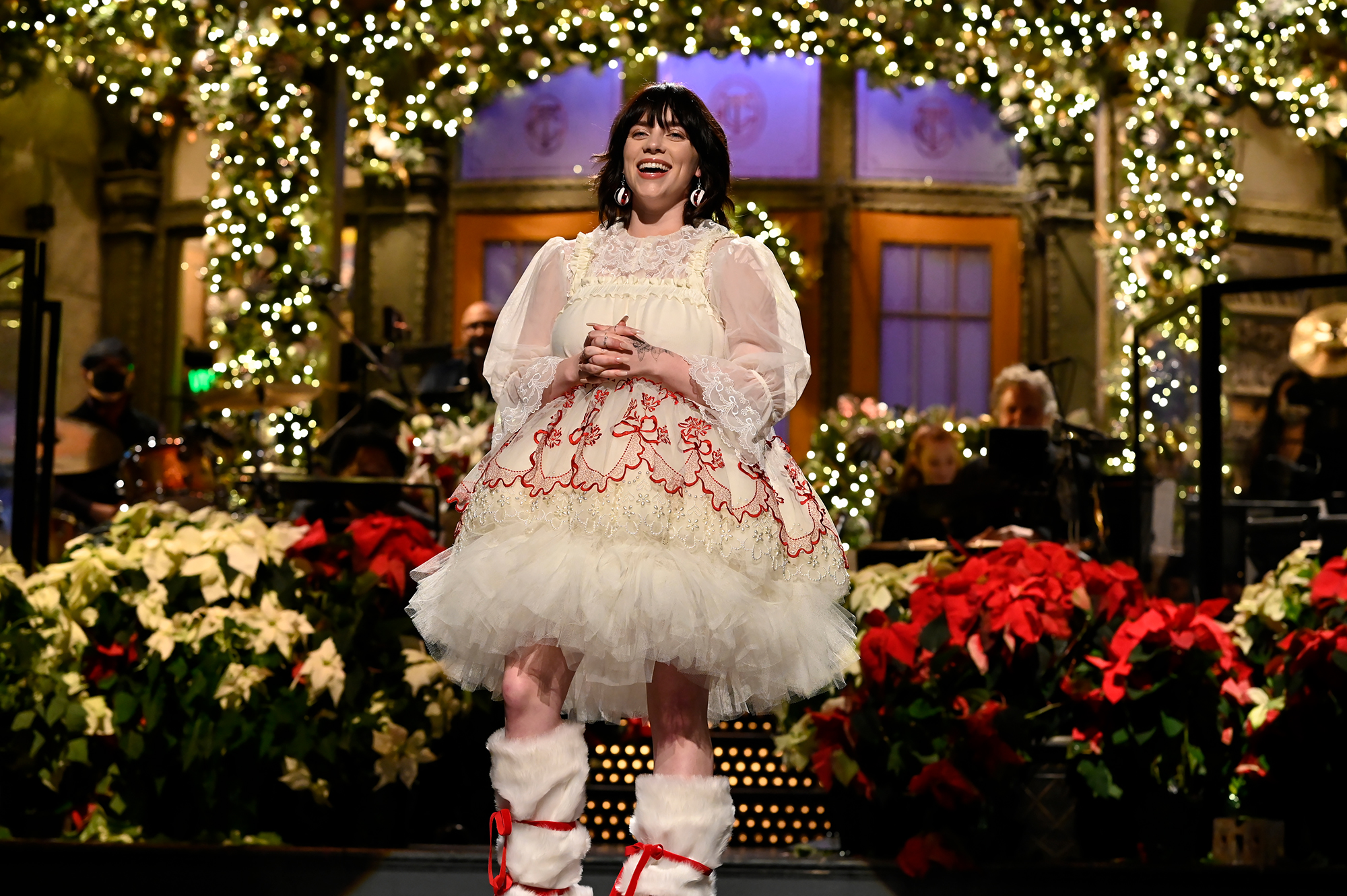 “AHHHHHHHHHHHH UR THE COOLEST,” the “Drivers License” songstress, 18, replied in November.

The beauty entrepreneur, who launched her debut fragrance earlier this year, is hardly the first performer to perform double duty on the sketch series. Stars including the likes of Harry Styles, Nick Jonas, Stevie Wonder, Britney Spears and Justin Timberlake have also held this honor.

Eilish, for her part, recently celebrated the release of her Happier Than Ever record, which was nominated for seven Grammys last month.

“What’s funny is, for the making of the album, I felt no pressure. I wasn’t worried; I was super confident,” the “Bellyache” singer opened up to NPR about the record in August. “I really felt that I did the best that I possibly could have done with a second album: I didn’t stay exactly doing the same thing, but I also didn’t change into something else, I grew. I thought that that was really good. It was when I started releasing music from the album, putting out singles, that suddenly I was like, ‘Wait.’ It’s really just about me liking it, and the real fans liking it. That’s all I care about.”

The “Ocean Eyes” performer told the outlet that she wanted a strong and easy-to-pronounce title for her sophomore record before choosing “Happier Than Ever” after one of the “most important songs” she’s ever written.

“Do you ever want to say something to somebody for a really long time? You don’t really know what you want to say or how to say it — and then, maybe you have a conversation with somebody else, or you think a little bit about it, and you figure out what it is you’ve been trying to say for this entire period of time? That’s how it felt,” Eilish recalled. “That was the entire writing process, that was the recording process. Everything involved in this song felt like how it feels when you finally find the words for something.”

For more, watch the video above!