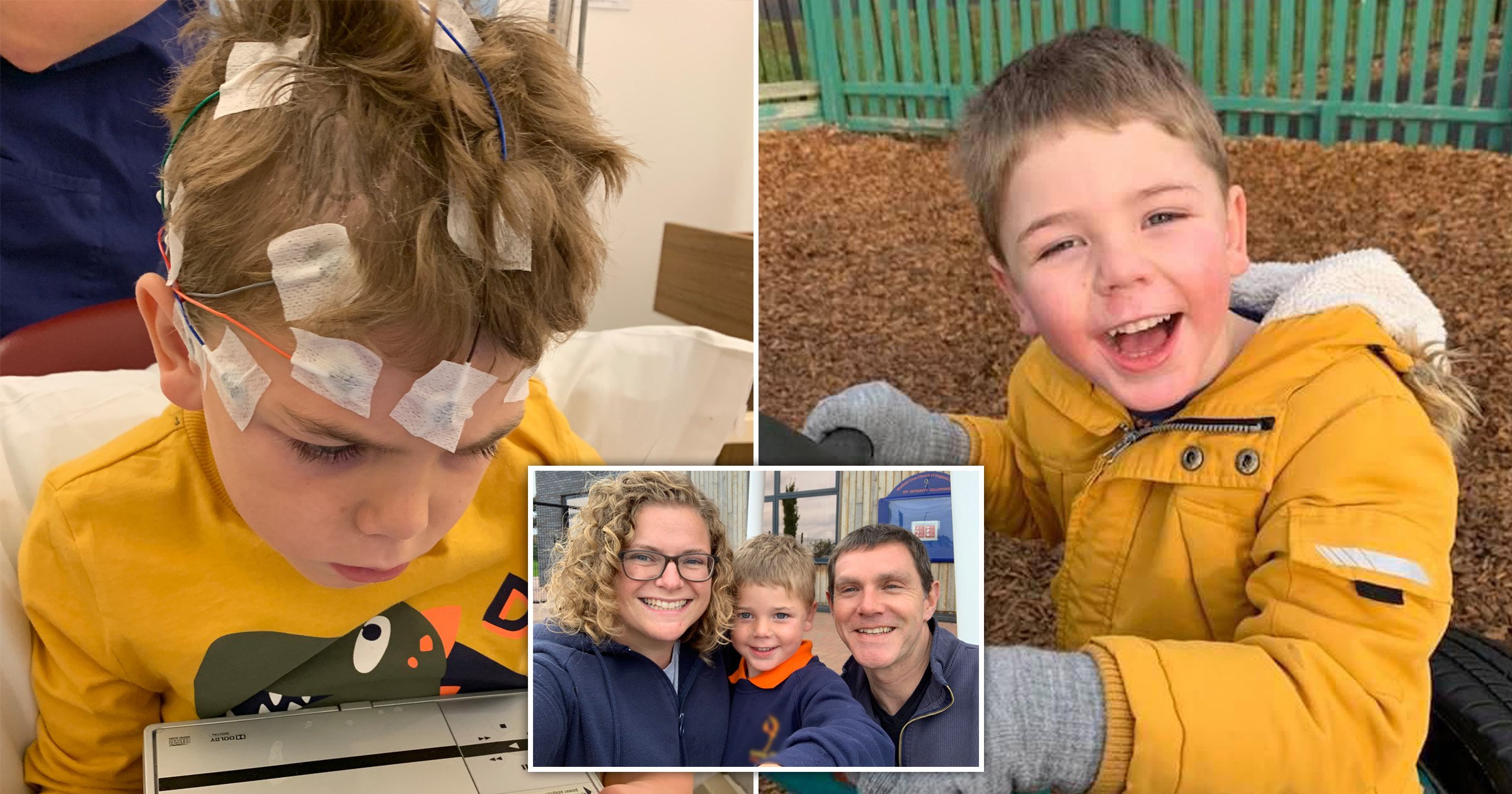 Isaac Tilley was just five years old when he was diagnosed with childhood dementia.

The young boy has CLN2 Batten Disease, which has caused him to suffer symptoms including seizures, loss of mobility, and delayed speech, for the past two years.

His family have been warned that Isaac may not make it to see his teenage years, with treatment aiming to slow down the fast progression of his illness.

As he loses his sight and the ability to walk unaided, his parents Aimee and Adrian Tilley are desperate to help their son make memories.

Aimee, who is now Isaac’s full time carer, said: ‘When he was three, he had his first seizure and ten days later after another seizure, he was diagnosed with epilepsy.

‘He was also suffering from speech delay and at one point, I thought he may have autism.

‘His private speech therapist had noticed something wasn’t right which encouraged me to ask for Isaac to be referred to a neurologist in Oxford.

‘It wasn’t until January this year that I noticed his hands and legs would shake and he was unsteady on his feet, this got worse over the next few months and his speech still wasn’t coming along either.

‘He had an MRI, heart tests, blood tests, and a lumbar puncture in February but it wasn’t until August, after receiving results from an Epilepsy Panel test, taken the previous November at our local hospital, that we were given the devastating diagnosis of CLN2 Batten disease.

‘It’s classed as a form of childhood dementia as children progressively lose all their skills and eventually die.

‘Isaac has lost the ability to run, play football, ride his bike and scooter, and even walk without support in just eight months.

‘It’s heartbreaking to watch. In his head he still wants to do these things but physically he can’t.’

The diagnosis came as a total shock to Isaac’s family, as the only early warning sign was his delayed speech.

They’re now sharing his story to raise awareness of the condition.

‘I want more parents to know about Batten Disease and to be aware of early symptoms because if it had been diagnosed sooner, Isaac would be having a much greater quality of life than he does currently,’ said Aimee.

Isaac is currently receiving enzyme replacement therapy, given via brain infusions every two weeks – but his parents fear this will be taken away as it’s such an expensive remedy.

His speech has declined since his diagnosis, he continues to have seizures, and struggles to walk without support.

It’s expected that without treatment, Isaac will go blind and his body will shut down. His parents have no idea how much longer they have left with their beloved son.

‘No mother should have to watch their child go through this,’ said Aimee.

‘The treatment isn’t a cure, it’ll slow down the progression but we don’t know how long for.

‘We recently went to Thomas Land and are going to Lapland UK in December. I’m desperate to make as many fun memories for us all while we can. Especially whilst Isaac still has his sight.

‘Making memories together is the most important thing to me now and we have to put a brave face on everyday.

‘I live in hope everyday a cure will be found to save Isaac and all the other little warriors like him.

‘I just want to raise awareness for this condition and encourage other parents to look into it and do their research.

‘I live with regret everyday I didn’t do more.’

The family are currently fundraising for adaptations needed for their home, equipment and making memories with Isaac. You can contribute through GoFundMe.