At least 841 manatees have died in Florida waters during the first half of 2021, an unprecedented level of mortality that has already shattered the previous record for an entire year.

The Florida Fish and Wildlife Conservation Commission’s preliminary data points to a decline in seagrass that the manatees eat as the main cause. The previous annual record was set in 2013, when 830 manatees died over 12 months due to a toxic red tide.

“Unprecedented manatee mortality due to starvation was documented on the Atlantic coast this past winter and spring,” the commission said in its report. “Most deaths occurred during the colder months when manatees migrated to and through the Indian River Lagoon where the majority of seagrass has died off. The long-term health effects of prolonged starvation in manatees that survived the Atlantic event to this point are not yet known.”

Manatees eat about 10% of their body weight in vegetation each day, grazing across large, underwater seagrass meadows. But the plants are particularly vulnerable to water pollution and have declined in the Indian River Lagoon region — a prime manatee feeding zone — due to poor water quality, algae blooms and extreme weather. 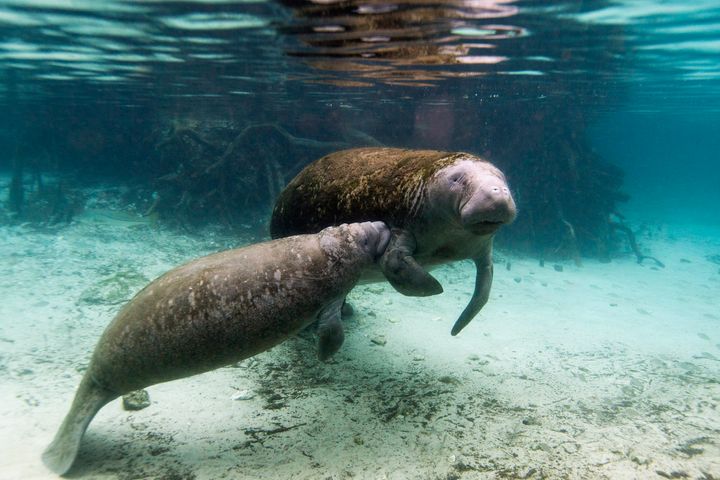 In March, scientists warned that manatees were dying at an alarming rate due to a combination of cold weather and the loss of seagrass. The rate of death was significant enough at the time to be declared an unusual mortality event by the U.S. Fish and Wildlife Service.

Boat strikes also remain a significant threat to manatees: 63 have been killed this year due to watercraft.

In June, a coalition of environmental groups and businesses called on Florida Gov. Ron DeSantis (R) to declare a state of emergency to protect manatees, saying the time had come “to act badly and effectively to rehabilitate our waterways.”

State officials, however, said such an act wasn’t necessary “at this time,”  the TC Palm reported.

The Associated Press notes that manatees were listed as endangered by the federal government, but rebounding numbers saw them downgraded to threatened in 2017. Some environmental groups have pointed to recent population declines as evidence the mammals should be afforded greater federal protection.

There are an estimated 7,520 manatees living in Florida waters.