Foreign-born Australians are more than twice as likely as their native-born neighbours to wear a face mask but a national survey has revealed growing fatigue among all residents towards measures aimed at stopping the spread of the coronavirus.

A survey of households by the Australian Bureau of Statistics, released on Monday, shows the proportion of people wearing face masks, avoiding crowds or even using hand sanitiser is falling despite the ongoing transmission of COVID-19. 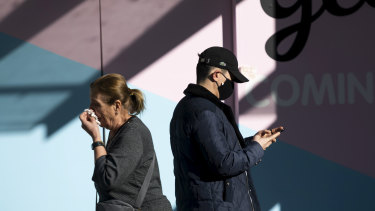 An ABS survey has revealed a drop in the proportion of people taking public health measures to stop the spread of coronavirus, including wearing a face mask.Credit:Rhett Wyman

The ABS found a quarter of people surveyed in June used a face mask, down 2 percentage points on the same question asked in May.

Across 12 of 13 separate measures tracked by the bureau, foreign-born Australians were more likely to take actions to protect themselves or their families from the coronavirus compared to local-born residents.

Foreign-borns were more likely to have worked from home, kept their children from school, avoided public transport or purchased additional medical supplies.

One of the most common measures people have been encouraged to undertake to protect themselves from spreading the coronavirus is to either wash their hands or use sanitiser.

In May, almost 84 per cent of all people washed or sanitised their hands more often than normal. By June, this had fallen to 75.9 per cent. Again, foreign-born people were more likely to keep their hands clean.

Foreign-borns were also more likely to avoid touching their face (44 per cent) than native-borns (32 per cent).

The only measure local-borns were more likely to undertake than foreign-borns was in terms of stopping work or cancelling shifts. While 10.5 per cent of foreign-born residents had stopped working or had shifts cancelled, 12.5 per cent of native-borns had given up income.

Prime Minister Scott Morrison on Monday told Parliament the coronavirus was an "enemy" that would continue to probe for "weakness", urging Australians to maintain measures to stop its spread.

"[We need] consistent hygiene and social-distancing behaviours, including wear a mask when required. If you're sick, stay at home and get tested," he said.