By Laura Chung and Ben Grubb 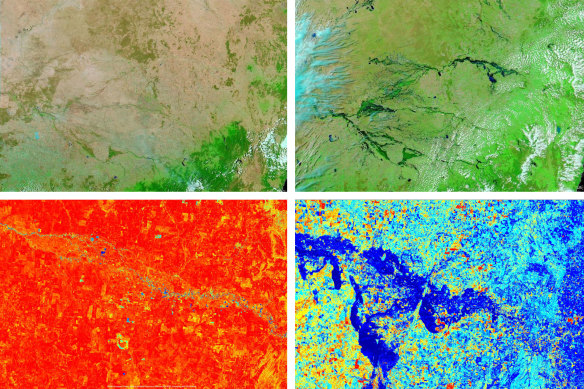 Top: NSW’s Darling, Lachlan and Murrumbidgee rivers in drought in 2019 (left) and after flooding in 2022. Bottom: A normalised difference moisture index representation of the Lachlan River in 2019 (left) and 2022.Credit:NASA, Sentinel-2

Large parts of inland NSW have been transformed into a freshwater sea in just over a month. Where river beds lay cracked and dry three years ago, they are now flowing with brown floodwater after weeks of heavy rainfall.

Back-to-back major floods have left millions of crops and livestock washed away, hundreds of homes damaged, and thousands of kilometres of roads destroyed across the state. For almost a month, the Central West has faced severe flooding conditions.

Satellite imagery from NASA shows the dramatic shift from drought to floods for the Central West. In 2019, major waterways including the Darling, Lachlan and Murrumbidgee rivers were bare. Three years later, they are overflowing.

In little over 24 hours on November 14, almost 120mm of rain fell over Forbes into an already saturated landscape, raising fears it could experience its highest flood in 70 years. The town held its breath as floodwaters rose and inundated main streets. The Lachlan River at Forbes peaked at 10.6m, just above the major flooding levels, but below the 1952 level of 10.8m.

The nearby town of Eugowra recorded a similar rainfall amount between November 12 and 13. One of the two river gauges upstream of the town showed the Mandagery Creek was rising by up to 88 centimetres an hour on November 12, as rain poured over the northeastern reaches of the Lachlan basin. The creek peaked at 9.8m two days later, surpassing the previous record of 9.6m in 1950.

The NSW SES has only just started to assess the destruction in the town, recording 216 damaged homes.

In satellite imagery taken of the region last week, it is almost impossible to distinguish where the Lachlan River begins and ends when compared to a photo of the same area in July.

Weatherzone forecaster Felix Levesque said a widespread deep low-pressure system was behind the most recent rainfall that smashed the Central West region from November 12. The weather system also affected parts of Victoria, Queensland and South Australia. But it was NSW’s Central West that was worst hit.

Within a few days, the system had moved across eastern parts of NSW, but the damage had already been done.

La Nina and the negative Indian Ocean Dipole (IOD) exacerbated the wet weather, Levesque said. But these weather patterns look set to weaken in the coming months; the IOD is already showing signs of easing. If it remains weak for the next fortnight, the Bureau of Meteorology said it would be able to classify it as finished. La Nina is set to weaken in the new year.

It will take weeks for the floodwater to work its way to the sea; floodwaters in the Central West will first flow through various rivers and creeks before emptying into either the Darling or Murrumbidgee Rivers, and then into the Murray River before moving through South Australia and out into the ocean.

Adding to the delay will be the thousands of litres of floodwater that have washed through the state since earlier this year.

The flooded landscape across the Central West paints a very different picture to that of three years ago when Australia was suffering a record-breaking drought.

Between January 2017 and December 2019, NSW temperatures were the warmest and rainfall was the lowest on record.

The satellite imagery shows the Lachlan River during November 2019 and 2022. Where once-dry paddocks of orange, caked dirt lay, brown floodwater now flows across the landscape.

Driven by the wet weather we’ve witnessed over the past three years, there has been a huge increase in moisture in the landscape. Sentinel Hub’s “normalised difference moisture” index data – which measures the vegetation water content – illustrates this increase over Forbes.

However, major flooding can benefit ecosystems. Some animal and plant populations are now undergoing a massive boon. Professor Richard Kingsford, director of the Centre for Ecosystem Science at the University of NSW, said the 2017 and 2019 drought caused rivers to dry up that many never expected would, including the Macquarie Marshes and parts of the Darling River. The drought also resulted in the death of thousands of wildlife species.

But typically after heavy rains and floods, there is a boon period, which Kingsford has already observed occurring. The question for scientists will be how much these populations bounce back and whether they will be able to establish themselves before the next drought.

“We will likely see a long-term shift in the ecosystems,” he said.

“There is a combination of the way we have managed rivers and climate change which may mean that some of them may no longer be adapted to get through [those droughts]. While other plants and animals from more extreme systems may be moving into better water areas where they survive and handle the really extreme droughts.

“This is a very big event. It has all the really damaging impacts on us, the infrastructure – and it will have huge economic impacts.

“But there will also be long-term economic and environmental impacts in terms of what this water has done to those ecosystems.”

Farmer Gerard Glover has been isolated on his Central West property – about 30 kilometres south-west of Brewarrina – for about four weeks. He said November’s flood was one of the biggest the area has experienced, and although they were prepared – by stocking up on ample food supplies, among other preparations – it will be weeks before they can get out.

“Santa Claus won’t be driving in,” he said. “If we don’t get any more rain I think we might be able to get out somewhere around Christmas or New Year.”

In the meantime, Glover will be using helicopters and four-wheel-drives to assess the damage to his property and do what he can, including mustering sheep and cattle. “Just because the [flood] peak has passed, it doesn’t mean the flood is over for us,” he said.

He said that after years of drought, floods, fires, and increasing living costs, many were hoping that this year’s crop would bring in a handy income stream. Lowe’s own property in the Central West has been isolated by floodwaters since November last year and the family will need to place this year’s harvest in a silo until the roads reopen.

“We were looking at a record harvest [across the state] up until the latest floods,” he said. “I don’t think there is a road in NSW that isn’t suffering significant damage.”

“This will be keeping the state’s engineers awake at night, they will be busy working out how to allocate resources and how to keep roads functional.”

Lowe said while there are short-term solutions, such as putting gravel in potholes, they were only temporary measures. Instead, he said more durable roads are needed and drier weather.

A spokesperson for Transport for NSW said the heavy rain this year had damaged more than 2100km of roads since February.

The spokesperson said Transport for NSW’s teams were working with emergency services to repair the road network as quickly as possible. While the damage from this latest round of flooding is still being assessed, it’s expected more than 10,000 km of roads have been damaged. Earlier this year, more than 100 bridges were damaged in the February and March floods. Those are expected to cost about $150 million to repair.

For now, it looks like there will be a break in the wet weather as a high-pressure system moves through South Australia.

“As it reaches NSW, it will ease those strong winds that have been affecting the south-east of the country,” Levesque said. Another trough is expected to move across Victoria and NSW later this week, which could bring some more rain. But models indicate the north of the country will be most affected.