THE FTSE 100 has fallen 6 per cent this morning after coronavirus fears forced easyJet and British Airways to issue job warnings.

Airlines are struggling as a result of travel restrictions caused by the coronavirus pandemic, which has infected more than 170,000 worldwide. 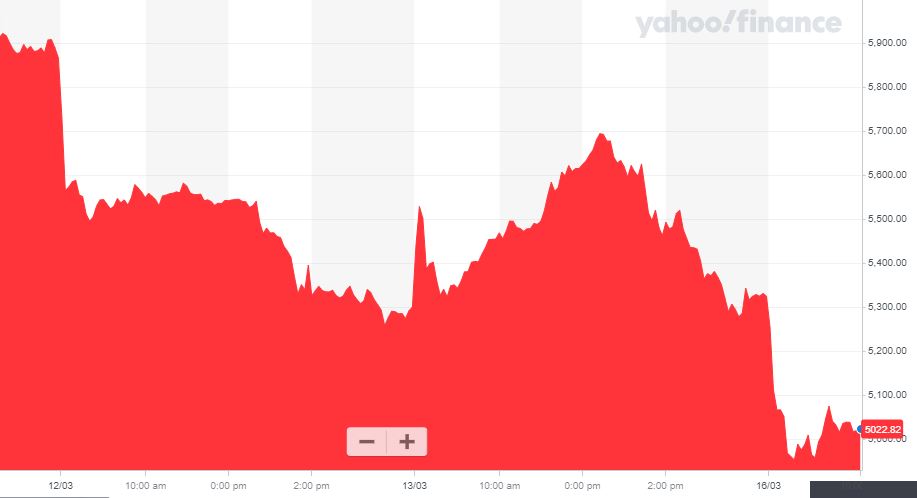 easyJet is grounding 100 of its 344 aircraft across Europe, with 15,000 staff members reported to be asked to take pay cuts and unpaid leave.

The news led its share price to plunge by over 30 per cent in early morning trading – currently sitting at 16 per cent down.

Meanwhile, British Airways has said it's cancelling 75 per cent of its flights.

On Friday, British Airways also said it'd have to lay off staff in a "fight for survival" as its boss branded the fallout from coronavirus "more serious" than the SARS outbreak and 9/11.

How the FTSE 100 falling affects your personal finances

FALLS in the stock market can affect your finances in a number of ways, here we explain how.

Pensions – If you save cash into a pension scheme where the provider invests your money, you'll likely see the value of your pension drop when the FTSE 100 falls.

But keep in mind that with retirement savings, you’re investing for the long-term so the drop in value isn’t likely to be permanent.

Instead, you’ll see your retirement savings grow again once the stock market recovers.

Savings and mortgages – There is no direct link between the stock market and your mortgage or savings accounts.

But if panic on the stock market spreads to the wider economy, the Bank of England may cut interest rates – and it did so last week.

This means your mortgage is likely to get cheaper, while savers will suffer from lower interest rates.

We’ve explained how the interest rate cut will affect your finances here.

Sterling – The value of the pound often rises if the FTSE 100 falls, as many of the firms on the index earns a significant amount of cash in the US.

But this hasn't been the case recently as markets around the world are in "panic mode", Jeremy Thomson Cook, chief economist of Equals, said last week.

He added: "Sterling is caught in the middle; a currency that has lost its haven status courtesy of Brexit while investors hold dollars as the global reserve currency."

The announcements have led the shares of the airline's parent company, IAG Group, to dive 20 per cent this morning.

At the time of writing just before 10am, the shares of Britain's biggest companies are down 6.29 per cent.

It comes as the central bank in the US – the Federal Reserve – cut its key rate to almost zero on Sunday.

Five other central banks including the Bank of England also took steps to relieve a shortage of dollars as part of a global coordinated action.

But stock markets around the world dived as investors worried that central banks may now have few options left to deal with the effects of the coronavirus if the economy gets even worse.

The FTSE 100 index has had a turbulent time recently, plunging 11 per cent in the worst day since Black Monday 1987 on Thursday.

The crash, which was the second worst ever, wiped £160billion off shares of Britain's biggest companies.

It then went up 7 per cent the following day as Boris Johnson stepped up his battle plan to delay the spread of the disease.

In February, experts warned that the coronavirus could collapse UK travel firms.

Last week, Qantas cut nearly a third of all flights, while Flybe airline even called in administrators recently.

Supermarkets have also been impacted by the outbreak of the virus, with shoppers clearing shelves amid panic buying and stockpiling chaos.