Gary Rhodes’ son has revealed he will be marking the first anniversary of his dad’s death by flying to Dubai and eating at one of his restaurants who are putting on a meal in his honour.

The father-of-two, who was hailed as the rock star of cooking and was famous for his gelled spiky hair, tragically died on Tuesday 26th November 2019, at the age of 59  after a fall at his home in Dubai where he had lived since 2011.

Tomorrow marks the first anniversary of Gary’s death and his son George appeared on Loose Women today to discuss how the family will be marking the occasion.

‘Tomorrow we are going to be marking dad’s anniversary,’ said George. ‘My wife and I are going to Dubai. The hotels there where dad worked, we’ve still got two restaurants out there.

‘They’ve been incredibly supportive in the last year. They’re putting on a dinner in dad’s honour – some of his classic dishes and  of course, a glass of champagne – the way he would’ve enjoyed it.’ 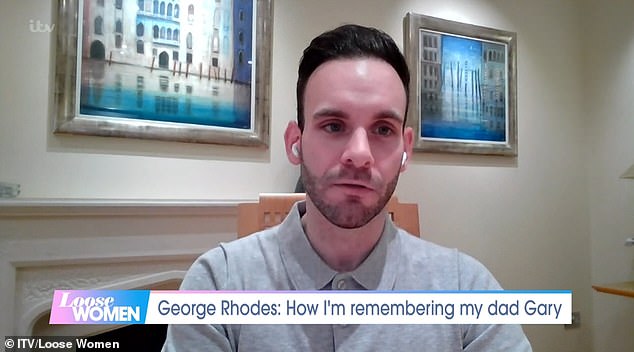 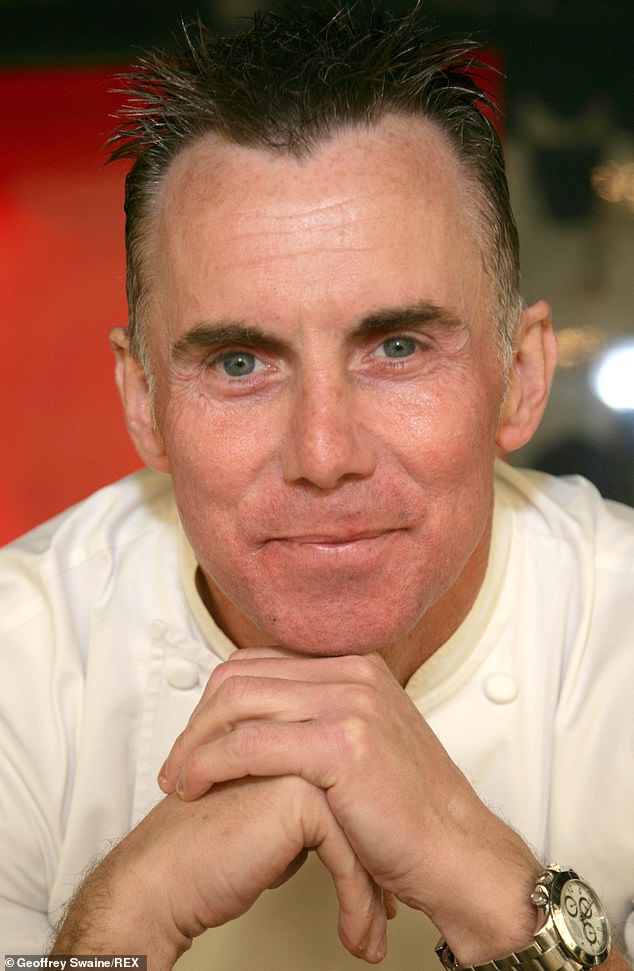 Presenter Ruth Langsford went on to ask George how his mother was coping with Gary’s death.

‘It’s been a hard year – obviously globally, everyone is struggling with losses and not being able to see their family,’ he explained. ‘For us, we’ve not actually been able to be there together as a family in a year. We would actually really need each other.’

‘It’s been really difficult, but she has taken on the two restaurants out there. I think it’s given her a focus and it gives us something to continue dad’s legacy which is something we really want to do.’

Recalling where he was when he heard the news about his dad’s death, George continued: ‘I was here in the UK. I was at work. It was a normal day. I’d actually spoken to dad hours before it had happened on the phone.

‘He was fine. He was filming a new TV series out there. He was telling me about how great it was and how positive it was all going.

‘Obviously, later in the evening I get a call from my mum and brother very upset, and I just had to get on the next flight out there to be there with them. 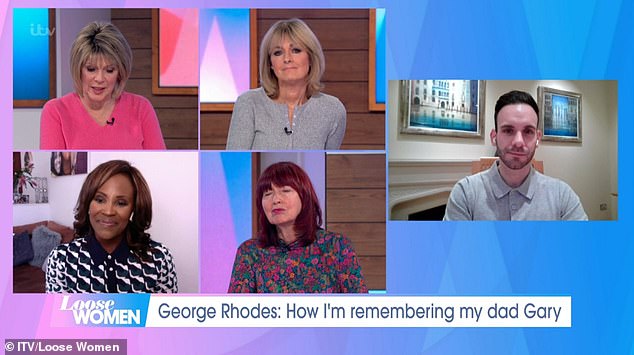 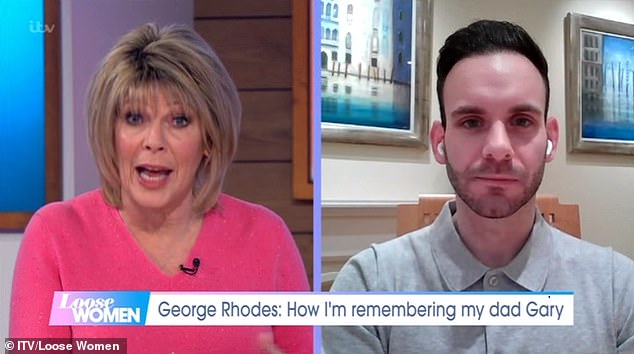 Presenter Ruth Langsford (pictured, left) went on to ask George (right) how his mother was coping with Gary’s death

Many years ago, when he was 19 and got his first chef’s job in Amsterdam, he got hit by a car and had severe brain injury – and because of that head injury, it left him having seizures for the rest of his life. It appears, he may have one of those seizures while he was at his home in Dubai.

He was warned by doctors of the risks of another head injury after he was hit by a van while running for a tram in Amsterdam in 1979.

It was during his first full-time job working at the Hilton and he needed six months to recover after undergoing eight hours of brain surgery.

In the Daily Mail in 2002, the chef said doctors warned him to be ‘very careful’, which led him to give up playing football over fears he could be injured again. 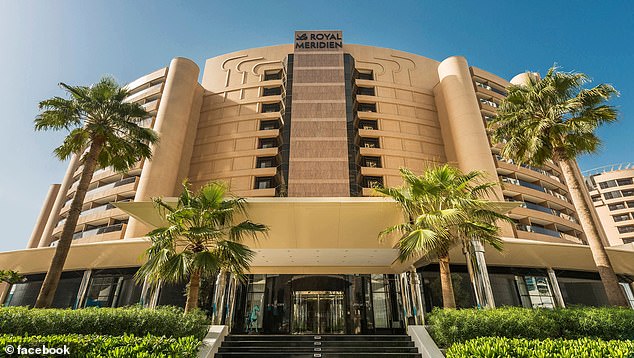 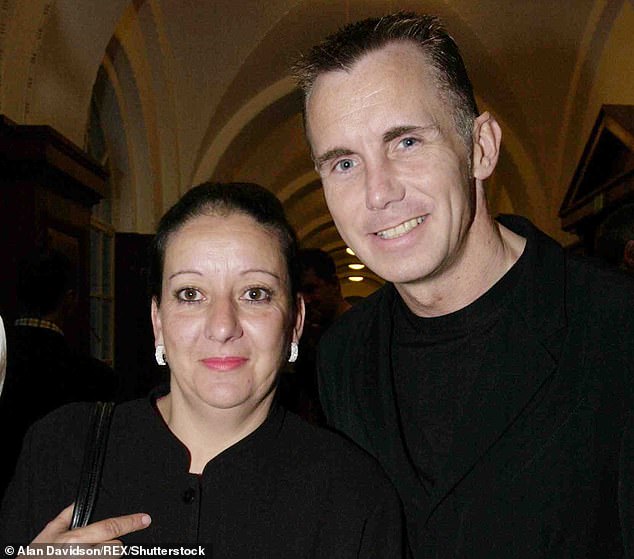 ‘He was a very incredible man. When he was 19 he had a lot to deal with,’ said George. ‘He achieved so much.

‘He was filming his new TV series, went home, had a call with me and dinner with mum, and then did his normal regime before bed – brushing his teeth before going to bed. Unfortunately he had a fall and that was it really.’

When he was asked how he will be spending Christmas, George continued: ‘First and foremost my wife and I would like to go over to Dubai and spend time together as a family.’

‘That’s really key and important. Just being together and having that time – sharing some good stories together always helps to get through this.’

‘I know he passed away before last Christmas but this year feels like the first of everything. It’s always difficult for people to get through it. Just being together is really key.’

Chef Gary Rhodes was warned by doctors at the age of 19 about avoiding another head injury after a near-fatal road collision.

Medics said he suffered a blood clot on the brain in a near-death accident when he was a teenager and needed eight hours of brain surgery.

Rhodes was hit by a van while working his first full-time job at the Hilton in Amsterdam in 1979.

After six months of rehabilitation doctors, warned him to be ‘very careful’ following the accident.

In an interview with the Daily Mail in 2002, he revealed how he ‘probably went back to work too early’.

He also said he stopped playing football over concerns for his health and worries about suffering another head injury.

Rhodes said: ‘The doctors didn’t tell me not to play any more, just to be very careful because of the risk of another head injury.

‘I probably went back too early because I wasn’t used to the long hours, and for the first three months I got tired very quickly.

‘But I was fed up of being at home all day doing very little. I was also desperate to get back into the kitchen.’

After the horror accident, Rhodes said he was left with slight damage to the back of his head, which temporarily affected his ability to smell certain citrus fruits.

His mother, Jean, said of the accident: ‘It was a life and death situation and quite honestly, they did not expect him to live.’