In last night’s episode of the Channel 4 show, parents-of-two Leighla and Phil, managers in operations and health and social care, bought a ramshackle, listed Georgian farmhouse on the outskirts of Stroud in Gloucestershire for £605,000.

But packed with protected original features, the couple explained how they were keen to restore the house sympathetically, and made the decision to put a distinctly industrial stamp on the build.

However, despite going £15,000 over their original £125,000 budget, those who tuned in were left less than impressed with the renovation – including the modern extension they added to their listed farmhouse. 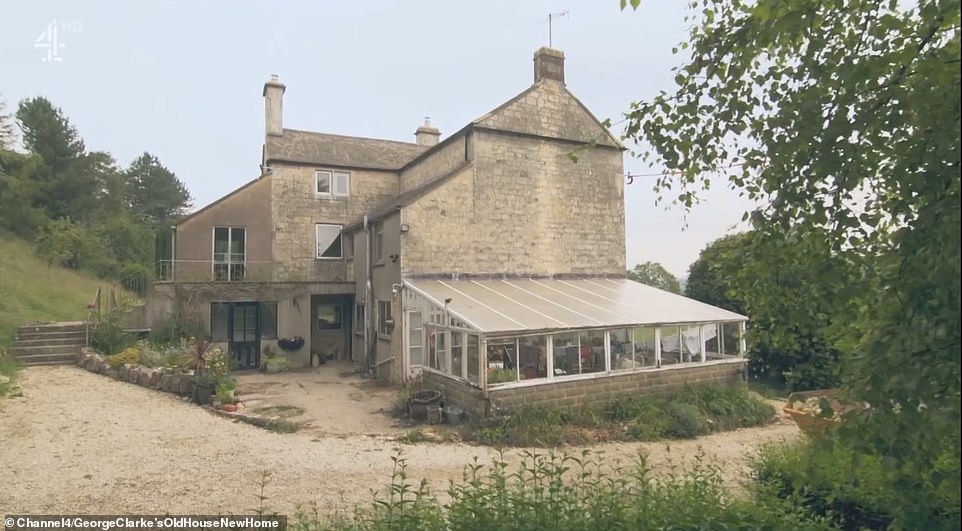 George Clarke’s Old House New Home viewers have slammed a couple for turning their 19th-century Georgian farmhouse into ‘another bland Ikea unit.’ Pictured, the exterior before 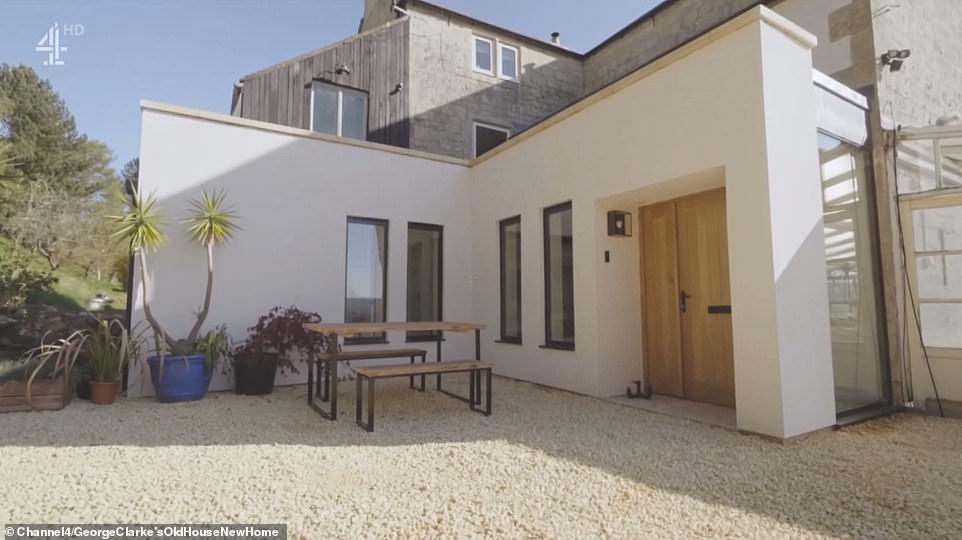 The couple added an industrial-style extension to their home to bring it into the 21st century. Pictured, after the renovation 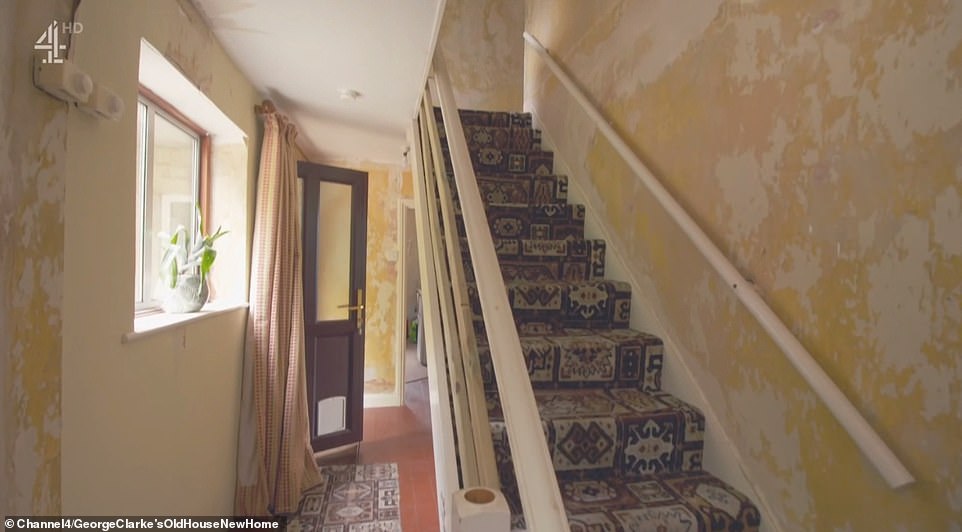 Before the renovation (pictured), George explained how the dark and dated hallway was anything but welcoming 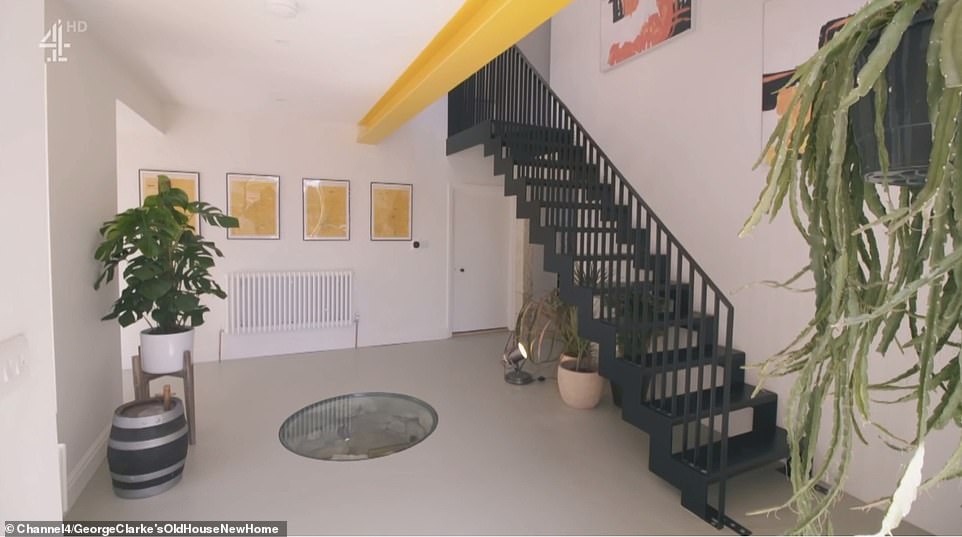 However, viewers took issue with the new industrial staircase and joked it needed to come with a ‘warning’ sign due to its sharp edges. Pictured, the hallway after the makeover 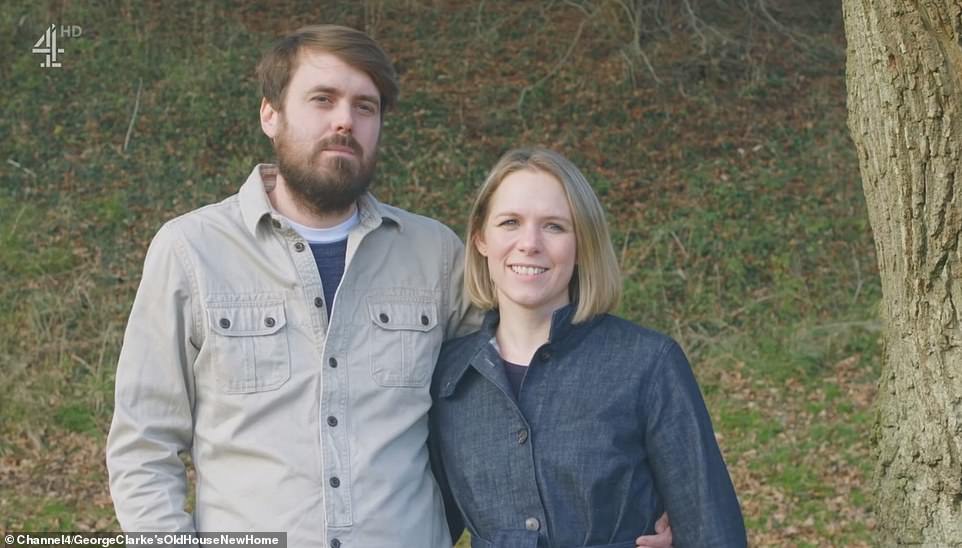 ‘But round the back, it’s a concrete jungle. A mish mash of 20th century additions and finishes has rendered it more unsightly than stately. Inside, it’s equally mixed up.’

In response, Lila added: ‘We want it to by sympathetic but also reflect us.’

After deciding to add an industrial-style extension to their home to bring it into the 21st century, the couple set to work – and ten months later, George was back to show viewers around the renovated property. 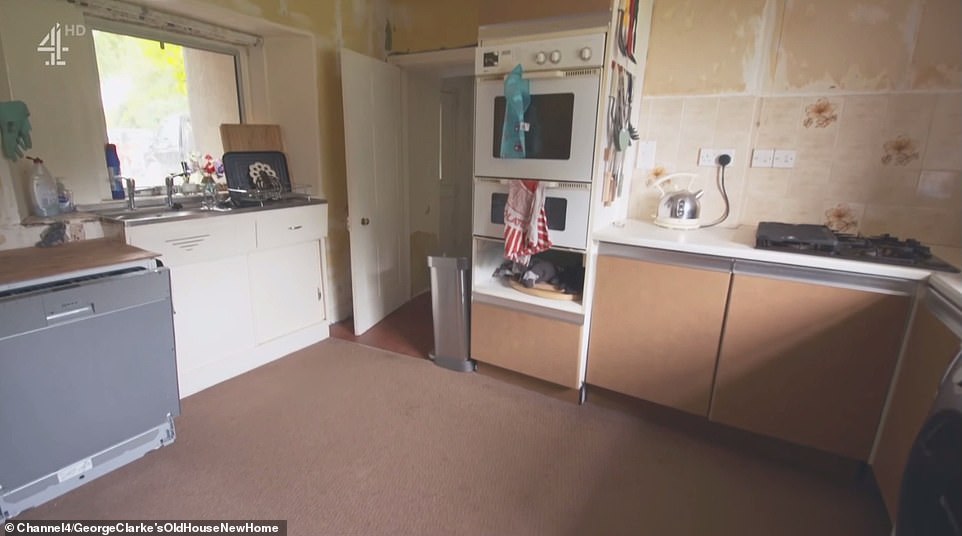 The kitchen featured dated decor and was in desperate need of a modern makeover. Pictured, before the transformation 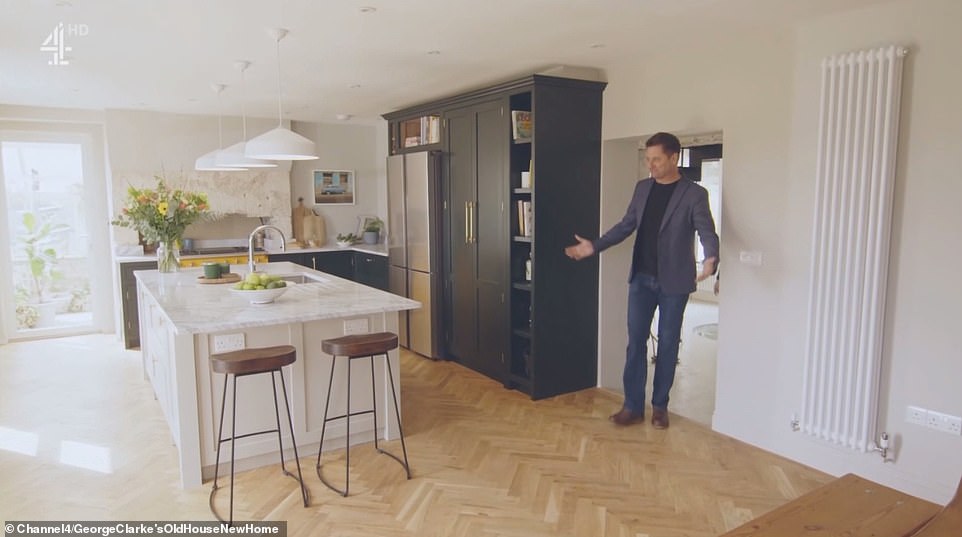 The kitchen (pictured, after) was given a new lease of life and was turned into a great space for the family to enjoy meal times together 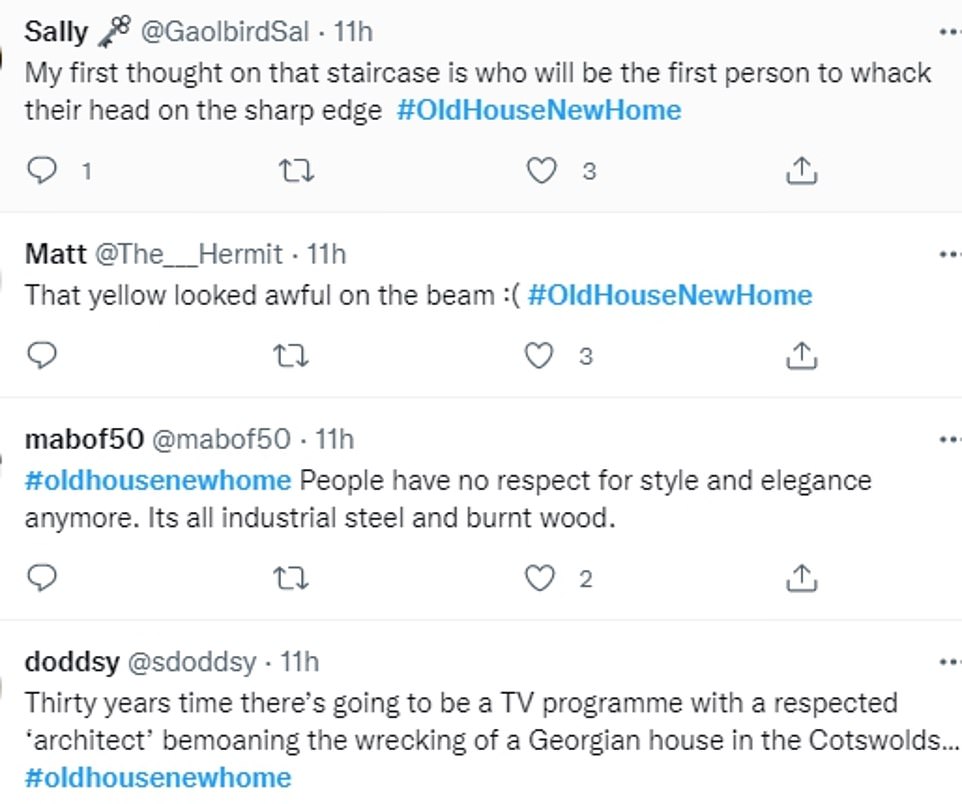 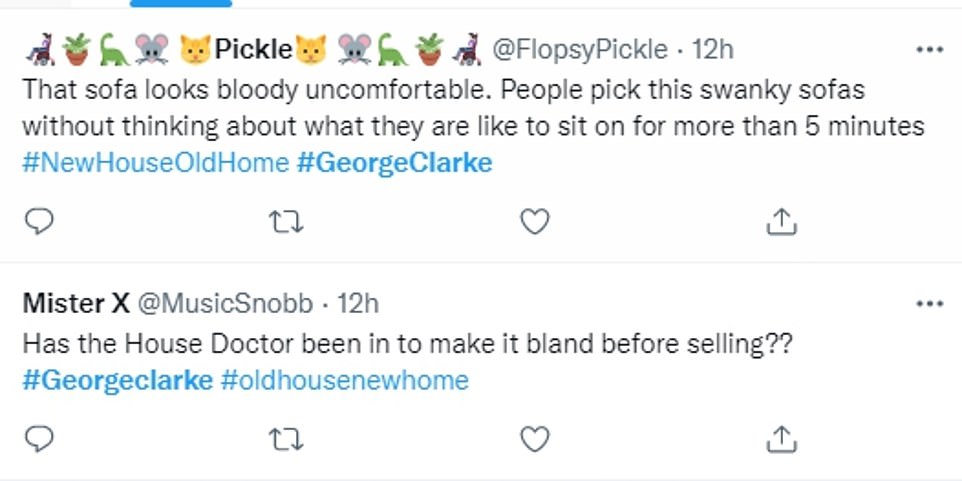 Taking to the comments section, one viewer penned: ‘Totally ruined the beautiful Cotswold home! Only the upstairs saved it. Sorry’

Speaking of the new, bold L-shaped extension, George said: ‘It’s a defined contrast between old and new. All of the elements work together with Leighla’s Japanese cladding above helping to bring a sense of calm to the once chaotic façade.’

He went on to explain how the previously dated decor didn’t make the most of the countryside views, while the dark and dated hallway was ‘anything but welcoming.’

But heading inside, he revealed a modern light-filled industrial space that paid tribute to the property’s history link to the brewery.

However, the hot yellow steel beam and the sharp stairs didn’t go down too well with viewers.

‘Staircase needs a mind your head sign! Ouch!’ wrote one, while a second penned: ‘My first thought on that staircase is who will be the first person to whack their head on the sharp edge.’

Another agreed: ‘You could accidentally kill yourself on that staircase.’ 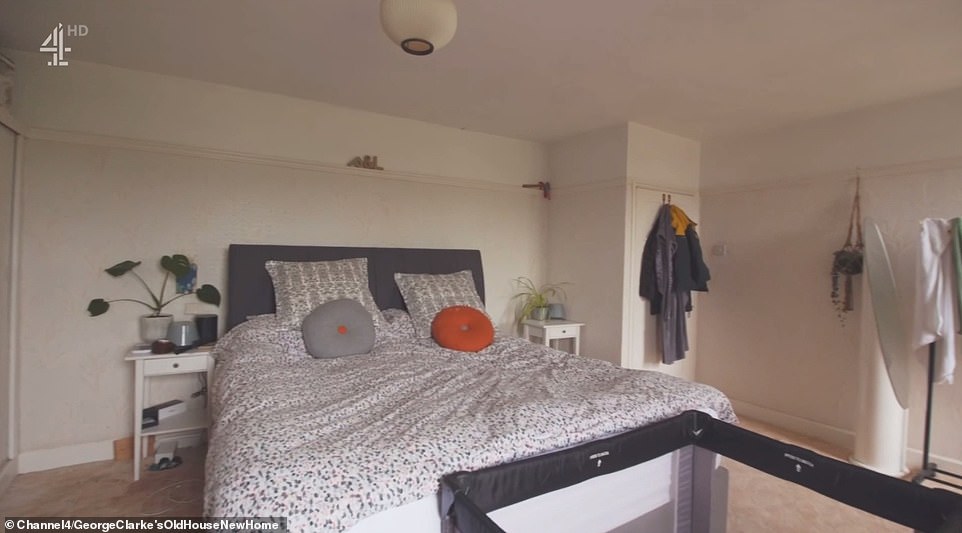 The master bedroom before was dull and in desperate need of some injection of colour. Pictured, before the renovation 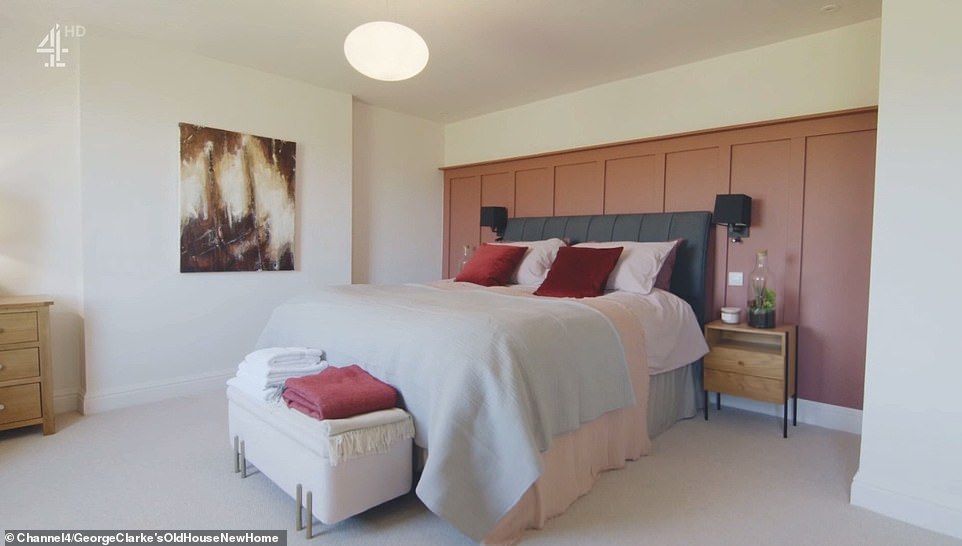 Upstairs, the master bedroom was given a refresh which included dusky pink panelling and a contrasting grey headboard. Pictured, after the renovation 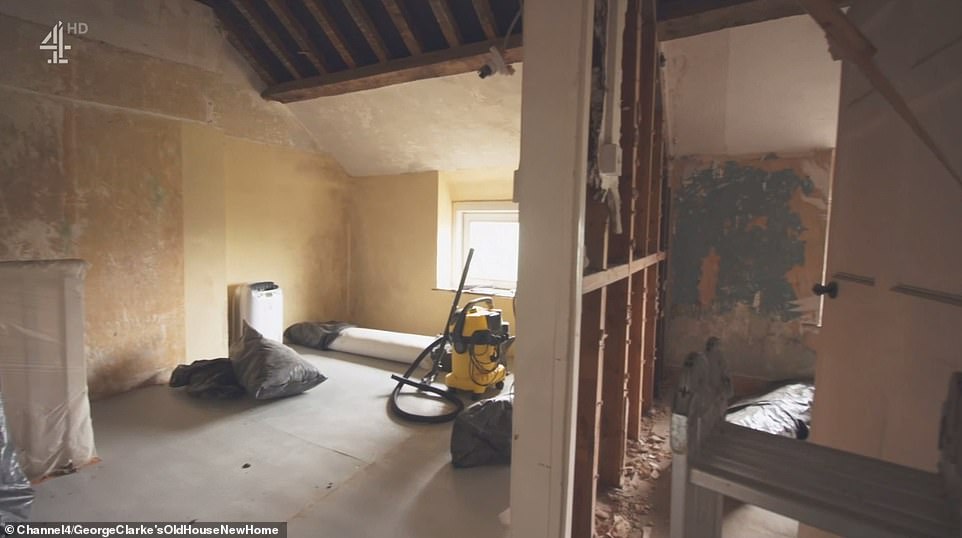 Before the renovation, the upstairs was an empty canvas for the couple to play with (pictured) 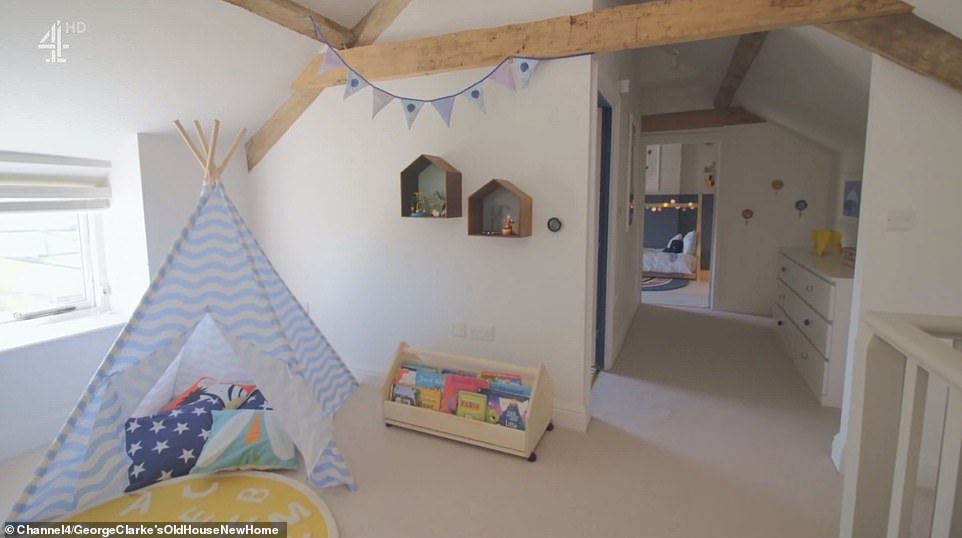 The couple created a dedicated floor for their two young boys – complete with two bold, colourful bedrooms, along with a shared bathroom and a very useful landing area (pictured) 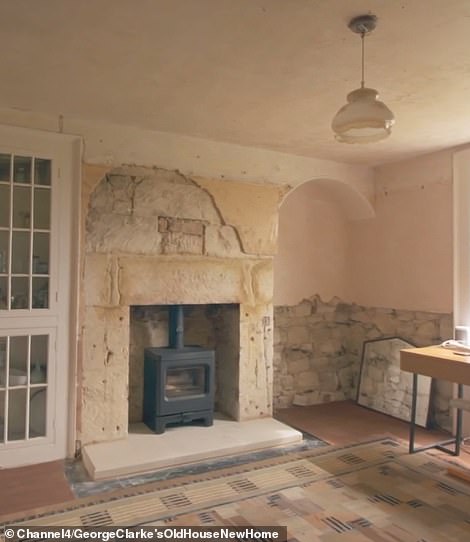 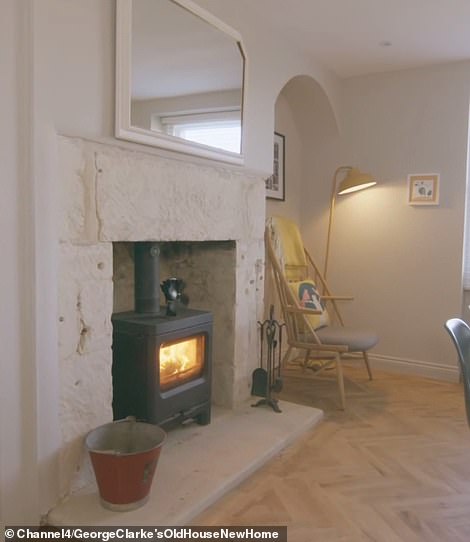 George praised the couple and said they ‘couldn’t have done a better job of uncovering, restoring and incorporating all of the listed traditionally features.’ Pictured left, fireplace before, and right, after

A fourth added: ‘That yellow looked awful on the beam,’ while a fifth commented: ‘People have no respect for style and elegance anymore. Its all industrial steel and burnt wood.’

As they continued their tour, George noted how before, the ground floor layout didn’t lend itself to family life.

‘Its shabby 70s kitchen was hardly the heart of the home, while two lesser used reception rooms at the back of the house enjoyed the best views and were packed with original features,’ he said. ‘The solution was to knock the lot through and reconfigure the space.’

‘From the materials to the colour palette, Phil and Leighla have absolutely hit the spot with this modern take on a traditional country kitchen. And they couldn’t have done a better job of uncovering, restoring and incorporating all of the listed traditionally features.’

Phil added: ‘Having that stone on show, you really know you’re in a stone Cotswolds house.’

Upstairs, the master bedroom was given a refresh, but it was the top of the house that underwent the biggest transformation.

The couple created a dedicated floor for their two young boys – complete with two bold, colourful bedrooms, along with a shared bathroom and a very useful landing area.

Still, those who tuned in struggled to see past the

‘Thirty years time there’s going to be a TV programme with a respected ‘architect’ bemoaning the wrecking of a Georgian house in the Cotswolds…’ wrote one, while a second penned: ‘Such a shame, beautiful house ruined.’

A third added: ‘Can’t stand it. How to kill a Listed building. What were the planners and conservation officers thinking?’

Meanwhile, a fourth commented: ‘Still a f***ing mess of styles on the Georgian house. Such a shame. Not unified enough. I’m a big fan of mixing modern and traditional but a Georgian style staircase in the modern space would have worked better. Layout wrong ruining that original front entrance.’