London: Spencer Davis, a British guitarist and band leader whose eponymous rock group had 1960s hits including Gimme Some Lovin’ and I’m a Man, has died. He was 81.

Davis’ agent, Bob Birk, said on Tuesday that he died in a hospital while being treated for pneumonia. He didn't give a location, but British media reported that Davis lived in California. 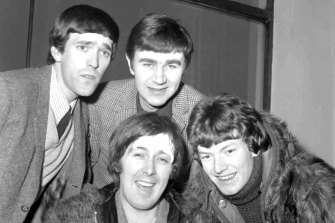 In this 1966 file photo, members of the band, the Spencer Davis Group, from top left: Muff Winwood, Pete York and Steve Winwood and Spencer Davis, foreground.Credit:AP

Davis is survived by his partner June and three adult children.