A dedicated teacher melted the hearts of Good Morning Britain viewers by  revealing how he delivers lunches to his vulnerable pupils every day during lockdown.

Zane Powles, assistant head teacher at  Western Primary School, from Grimsby, spends his morning walking five miles to deliver the lunches to his pupils, who are currently self-isolating with their families at home.

The educator, who used to be in the army and was named Primary School Teacher of the year in 2019, said we all needed to do our bit .

Viewers of Good Morning Britain’s second half, which was hosted by Lorraine and Dr Hilary today, commended Zane’s efforts during the lockdown enforced around the UK during the coronavirus pandemic. 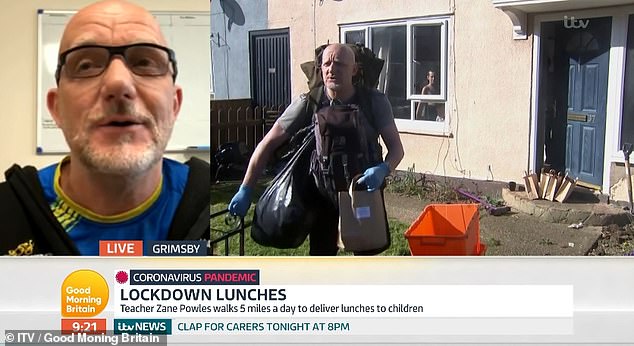 Primary School teacher Zane Powles (pictured), from Grimsby, was a guest on today’s Good Morning Britain on ITV to explain why he walked five miles a day in order to deliver lunches to his vulnerable pupils

Zane explained he delivers half of the meals by car and the others by foot, dropping them in front of his pupils’ houses to respect the social distancing guidelines,

He said the response he had seen was ‘brilliant,’ with pupils and parents alike making sure to wait for him at their windows to wave and smile.

He also receivesd kind notes from his pupils thanking him for his caring gesture.

Every day, Zane packs 30 to 40 pounds of lunches in a large backpack and carrier bags before setting off on his walk. 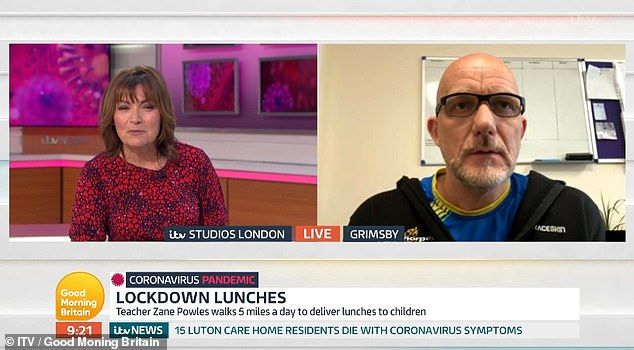 Zane said he felt it was important to come to the help of his pupils, and said that ‘we do care about every single child in our school.

‘We do out very best, this is just the sort of things we do in our school,’ he added.

Zane was named Primary Teacher of the Year in 2019, and said he was overwhelmed by the title.

He humbly said the best he could do was to ‘never fail’ children, and to ‘keep giving everything’ to the pupils and to ‘never fail them.’ 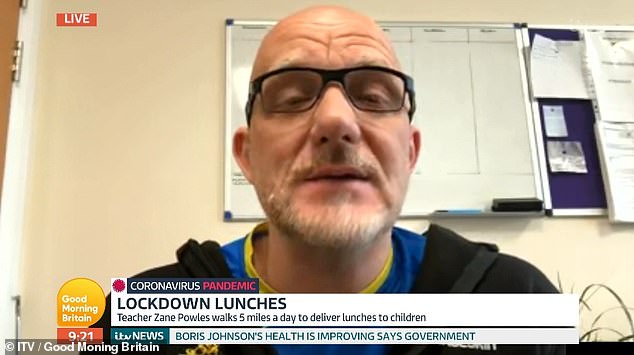 The educator, who used to be in the army, said he delivered half the meals by car, and the other half by foot

Viewers of Good Morning Britain, and Lorraine Kelly, who is currently hosting the second half of the ITV show, commended Zane for his dedication to his children.

‘How incredible is Zane Powles, Walks 5 miles to deliver lunches to his pupils every day. Wow,’ said another.

‘Give him a sainthood,’ said another.

‘Queen’s going to have a big New Years Honours list,’ they went on.