COP26 has finished and the question on everyone’s minds is: “was it a success or a failure?” Climate change is the world’s most wicked and complex problem, so there is no simple answer.

But let’s start with the pretty good. Intense pre-COP negotiations resulted in a number of substantial commitments in the first week of the meeting. On day two, there was the Glasgow Leaders’ Declaration on Forests & Land Use, a global pledge to end and reverse deforestation by 2030. More than 100 countries signed up, covering land containing about 85 per cent of the world’s forests. The declaration included pledges of about $26 billion of private and public finance. 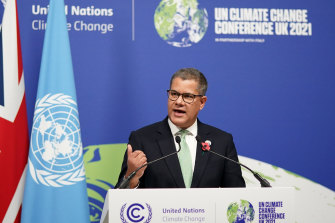 COP26 President Alok Sharma speaks at the close of COP26.Credit:Getty

Day two also saw the announcement of the Global Methane Pledge, designed to reduce methane 30 per cent by 2030. More than 100 countries signed up, representing about 70 per cent of the global economy.

Coal was the focus of day three, culminating in more than 190 countries and organisations signing up to the Global Coal to Clean Energy Transition Statement. This is aimed at phasing out coal power and ending support for new coal power stations. Signatories included Vietnam, a potential major destination for Australian coal.

In the second week, after most world leaders had gone home and the negotiators got down to the business of drafting the final statement, a joint announcement from the US and China caught many by surprise. The US-China Joint Glasgow Declaration on Enhancing Climate Action in the 2020s outlined an agreement to boost co-operation on climate action. Importantly, “2020s” is mentioned eight times in the body of the declaration, signalling that the world’s two biggest emitters understand the importance of near-term action to avert climate catastrophe.

Emphasis on action “by 2030” is among the most significant themes of the final Glasgow Climate Pact. All countries are urged to “revisit and strengthen” 2030 targets in advance of COP27 in Egypt next year.

Countries have also agreed on “accelerating efforts towards the phase-down of unabated coal power and inefficient fossil fuel subsidies”. This sentence alone captures the complexity of the negotiations. On the one hand, this is the first explicit mention of coal and fossil fuels in 26 years of COP declarations and decisions. On the other, the words “unabated”, “inefficient” and “phase-down” may be viewed as get-out-of-jail-free cards for some fossil-fuel consuming and exporting countries.

While many countries brought an increased level of ambition for emissions reduction to the Glasgow table, the ultimate goal of “keeping 1.5 alive” – that is, keeping warming to no more than 1.5 degrees above pre-industrial levels – has not been met. Analysis by Climate Action Tracker shows that even with the new 2030 pledges, a global temperature rise of 2.4 degrees by the end of the century is a real possibility. This means catastrophically more severe climate extremes, and sinking prospects, literally, for low-lying nations, including many of our Pacific neighbours.

Another major disappointment is that the developed world fell short of fulfilling a decade-old promise to deliver $US100 billion each year to help poorer nations deal with climate impacts.

So who were the bad COPs in Glasgow? There is one that consistently stood out. Australia.

Perhaps nothing was more symbolic of Australia’s lack of commitment to the goals of the Glasgow COP than the pride of place at the Australian pavilion given to Santos, one of our largest gas and oil companies.

Multiple assessments of Australia’s commitment and actions to reduce dangerous climate change have ranked us at the bottom of the international pack.

The “Australian Way” plan to get to net zero by 2050 is a hotchpotch of creative accounting, claiming credit for emission reduction actions of the states and territories and the previous Labor government, spruiking technology that doesn’t work, and magical thinking about technology that hasn’t been invented yet.

On top of this, the government has refused to strengthen Australia’s 2030 emissions targets – the weakest in the developed world – and refused to sign on to commitments to reduce methane and transition out of coal. Everyday Australians and businesses pay a high price for the Morrison government being out of step with the rest of the world.

Not only does Australia continue to obfuscate and delay, we are only contributing about a 10th of our fair share to help poorer nations cope with the climate impacts we have helped cause.

At the end of each COP, the Climate Action Network, an international umbrella organisation of over 1000 groups devoted to increased climate action, presents the Colossal Fossil Award to the country or organisation deemed to have been least helpful at meeting the objectives of the meeting. No prizes for guessing who got it this year.

Understand what is happening to the environment, what’s being done about it and what it means for the future. Sign up here.