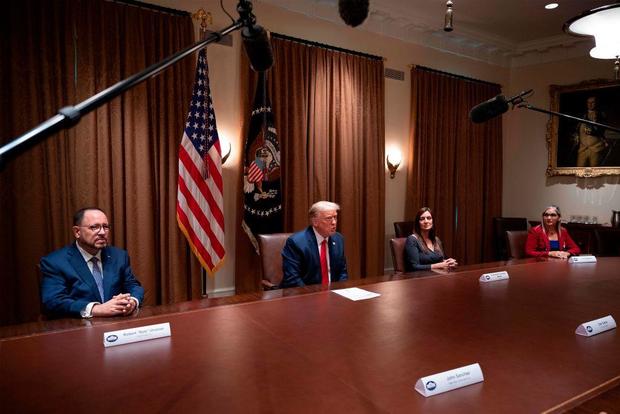 Goya, which claims to be the largest Hispanic-owned food company in the U.S., is facing a backlash after CEO Robert Unanue praised Donald Trump during a Thursday event at the White House. “We’re all truly blessed at the same time to have a leader like President Trump, who is a builder,” Unanue said.

Unanue, who is of Spanish descent, was one of a handful of Hispanic supporters on hand as the president signed an expansion of the “Hispanic Prosperity Initiative.” The executive order is meant to “improve access by Hispanic Americans to educational and economic opportunities,” according to a White House press release.

[email protected] has been a staple of so many Latino households for generations.

Now their CEO, Bob Unanue, is praising a president who villainizes and maliciously attacks Latinos for political gain. Americans should think twice before buying their products. #Goyaway https://t.co/lZDQlK6TcU

A Twitter account for United Farm Workers issued a statement in response to Unanue’s statements featuring audio from Mr. Trump’s 2016 presidential campaign announcement, in which he claimed many Mexicans immigrating to the United States were criminals and rapists.

Our statement on Goya:
A thread (1/) pic.twitter.com/1rRkn3XDdA

Goya can’t insult us & still get our business. Almost all us immigrants have used Goya at least once before.

But our ancestors & our families made their own beans and juices before Goya! #BoycottGoya & drop all y’alls best homemade bean recipes below!!https://t.co/ff6mfqNOs8

Goya has yet to issue a response to the backlash.

Unanue’s comments are in line with his history of political donations. According to the Federal Election Commission database for individual contributions, Unanue most recently donated $3,000 to the Republican National Committee and $3,000 to WinRed last year. WinRed is a donation platform endorsed by the RNC and the Trump re-election campaign.