With two Oscars on his mantelpiece, six Baftas, nine Goyas (the Spanish Oscar), four prizes at Cannes (but never the big one) and honorary doctorates from Harvard and Oxford, Pedro Almodovar has nothing left to prove.

Having just turned 70, his place as one of the greatest filmmakers of the past 40 years is secure. He could put his feet up if he wished: instead he gives us a beautiful, elegiac meditation on why he can't do that, even if his feet hurt. 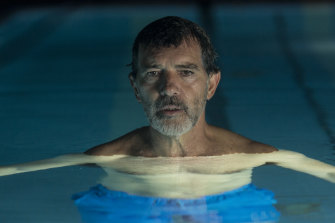 Antonio Banderas plays a film director not unlike Pedro Almodovar in Pain and Glory.

It's a kind of anti-film: most of it takes place in one apartment, the lead character can hardly walk given his back pain and he no longer wants to be part of the wider world. He aches in the places where he used to play, as Leonard Cohen sang. This then is Almodovar as the lion in winter – still powerful, still with plenty to say but wondering how much longer?

Almodovar's films have been getting more autobiographical as he ages – although not in a straightforward manner. This one is about a world famous filmmaker called Salvador Molla (Antonio Banderas) who has stopped writing because of the pain. What is the point of writing if I haven't the strength to direct it, he says to one of his old collaborators, Alberto (Asier Etxeandia), an actor with a taste for smoking heroin.

Salvador Molla is made up of an anagram of Almodovar, of course. Banderas too is made up to look like more like Almodovar, with a finger-in-the-socket shock of grey hair; the apartment is a replica of the one Almodovar occupies in Madrid, with some of the director's own fabulous art; Molla even wears some of his director's real clothes. This is me, the director is telling us – alone, crumpled, cranky and hermet-like at 70. Still there is always more than meets the eye with Almodovar – or more that his eye wants us to meet.

Molla hardly leaves the house. Almodovar still walks the red carpet at Cannes most years and gives ebullient interviews. Molla is recovering in part from the death of his mother four years earlier. Pedro's mother died 20 years ago, although he is telling us something about her importance by casting Penelope Cruz as Jacinta, Salvador's mother.

Seeing her is like recognising an old friend: she and Pedro have done so much together, so why shouldn't she play a peasant woman in gaily coloured skirts? We meet her in one of the film's many gorgeous flashbacks, a reverie where she and three other village women bash laundry by the river. Jacinta has a small boy on her back. This is Salvador as a five-year-old (Asier Flores), a muse who brings innocence to the film.

The entire film is a reverie; in fact, an attempt by a grand master to take stock – without sentiment, and with more clarity and less obfuscation that he usually deploys to protect himself. Almodovar goes further in a confessional mode than ever before. It's not as overtly comical as we expect, partly because of the pain, but even then he depicts it in a clever, unsentimental way – with a short animated montage that objectifies all his ailments: depression, tinnitus, fused back, migraines, insomnia, dodgy lungs. All of which is apparently true.

Banderas is transformed in this role: haggard, pale, haunted by his memories, but still with a warmth that makes it easy to believe he has a lifetime's great work behind him. The question, he wonders, is whether he has anything good ahead? And the film is its own answer: a masterful, melancholy, tender, lacerating self-examination, filled with colour and light and the ghosts of those he has loved. Almodovar at 70, and perhaps astonishing to himself, continues to grow.