Great British Bake Off viewers were left in shock after underdog of the competition David Atherton was crowned the champion – despite never winning Star Baker.

In tonight’s nail-biting grand finale of the Channel 4 show, the final three contestants battled it out to impress judges Paul Hollywood and Prue Leith for one last time.

With London-based shop assistant Steph Blackwell, 28, previously winning Star Baker four times and geography teacher Alice Fevronia, 28, from Chester, twice, fans were expecting one of them to walk away with the coveted title.

‘If Steph doesn’t win then the show is beyond fixed. David hasn’t done anything amazing so doesn’t deserve it at all in my opinion,’ wrote one, before the show aired, while a second penned: ‘Team Alice tonight – my favourite from really early on.’

However, it was international health adviser David, 36, from London, who baked his way to victory in the last episode of the tenth series – much to the surprise of viewers and social media users alike.

‘My heart broke for Steph tonight she should have won,’ wrote one, while a further added: ‘Gutted for Steph. If it had been judged on consistency instead of the final she would’ve won it hands down.’ 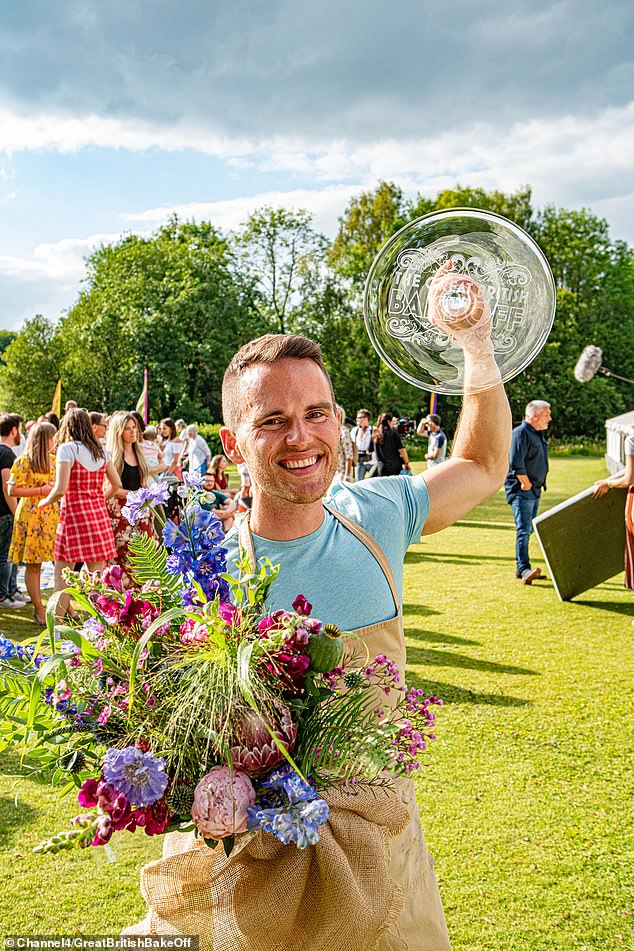 David Atherton (pictured), 36, from London, baked his way to victory in the last episode of the tenth series, which aired on Channel 4 tonight 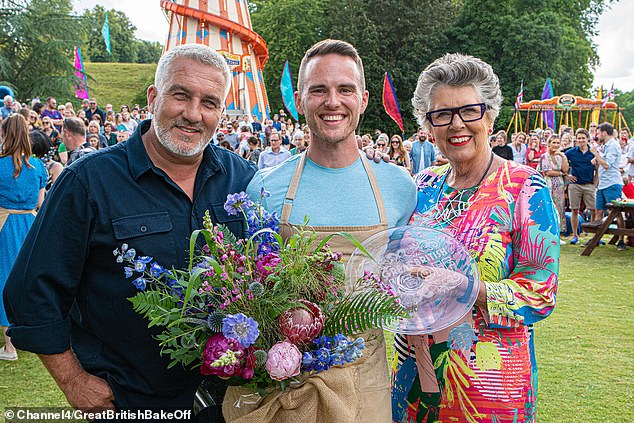 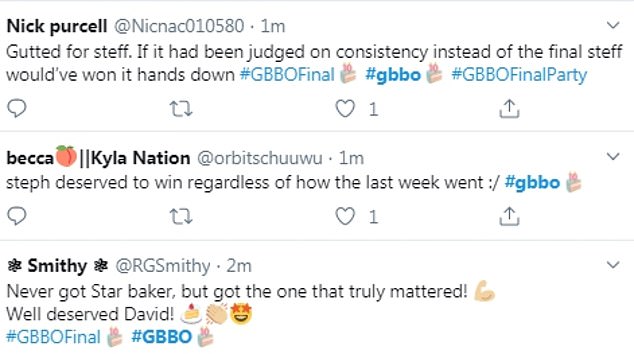 Before the show aired, fans took to social media to express their views on who they wanted to win (pictured)

A third commented: ‘Steph deserved to win regardless of how the last week went,’ while a fourth added:

‘Well done David!! You were my dark horse all the way through and you pulled it out of the bag in the final. Well deserved.’

In the opening signature challenge the three remaining amateur bakers were asked to create the ‘ultimate chocolate cake.’

‘Your cake needs to be creative and decorated to a professional standard – in just two hours,’ explained presenter Sandi Toksvig.

While David’s was cake was dubbed ‘too boozy’ by the judges, they praised Steph’s efforts and enthused: ‘Now that’s a black Forest gateau!’ 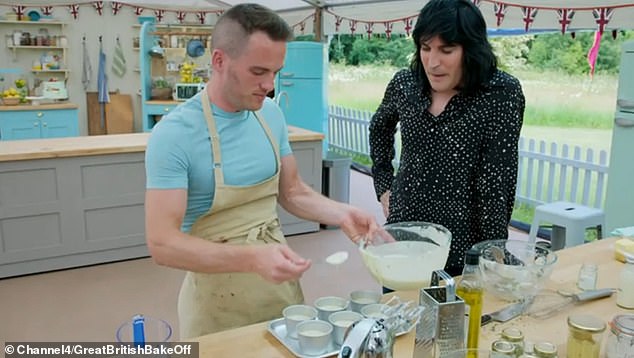 While creating his twice-baked Stilton soufflé, David admitted he once used a souffle tray for a plant pot, as he didn’t know what it was. Pictured with Noel Fielding 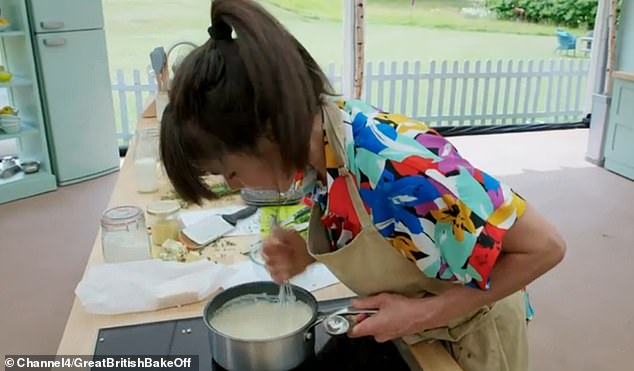 Fan favourite Steph (pictured) failed to impress in the technical challenge, with judges comparing her soufflé to a ‘pancake’

For the technical challenge the finalists were tasked with tackling one of the most trickiest of delicacies – a twice-baked Stilton soufflé.

Before leaving the tent in order to judge blind, judge Paul Hollywood warned: ‘On this challenge, you have to be delicate.’

But while Alice’s attempts were ‘under baked’ and ‘too gooey,’ Steph’s were branded more like ‘pancakes’ or ‘soups’ – and it was David’s which were congratulated for being ‘delicious.’

For the showstopper challenge and their very last chance to impress, the remaining trio were instructed to make an edible illusion.

Adding an extra dimension to the bake, it had to be made of only cake, sweet bread and biscuits, while also representing a unique memory for the bakers. 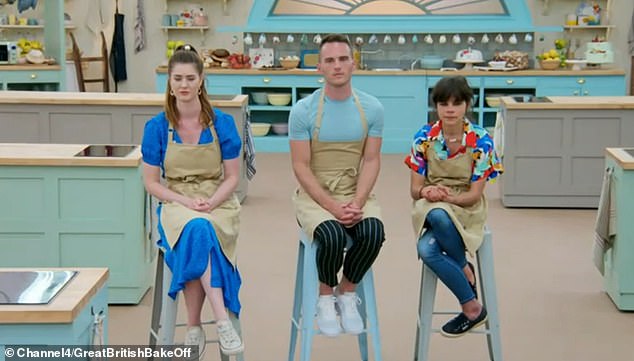 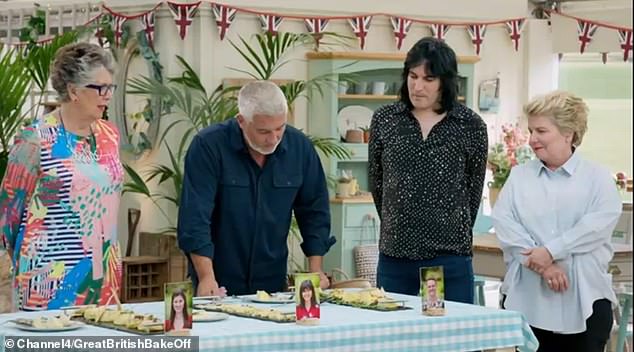 Steph opted for a burger, Alice created scotch eggs with ice-cream while David impressed with a picnic basket of fruit, fig rolls and cheese in his bid for glory.

After proving consistent and repeatedly being crowned Star Baker, many expected Steph to be crowned the winner – while David was considered to be the outsider of the competition.

As the finalists nervously gathered outside the tent for a carnival-themed party with family and friends, their fate was revealed.

‘I’m delighted to tell you after ten weeks of intense competition, the winner of 2019 Great British Bake Off is David’, said host Sandi Toksvig.

‘I watched this since the second series, for nine years I’ve been day dreaming about being on Bake Off. It was never on my mind that I could win this,’ beamed David, who was presented with the coveted cake stand, as well as flowers and the praise of her fellow bakers.

‘Week after week not being the Star Baker, just making it to the final was a win for me.’

While many viewers admitted they never could have predicted the outcome, Twitter was inundated with messages of support to congratulate him on the win.

‘So glad David won #GBBOFinal – I know folk are annoyed with the outcome but it’s who was best on the day. Roll on next year!,’ wrote one, while a second commented:

‘Congrats to David! The right person won. He was consistent throughout. He kept his cool and pull out all the stops when it really counted.’

A third added: ‘Great win for David and well deserved. Steph and Alice were worthy finalists. It’s a tough competition and they have all given me many hours of viewing pleasure’ 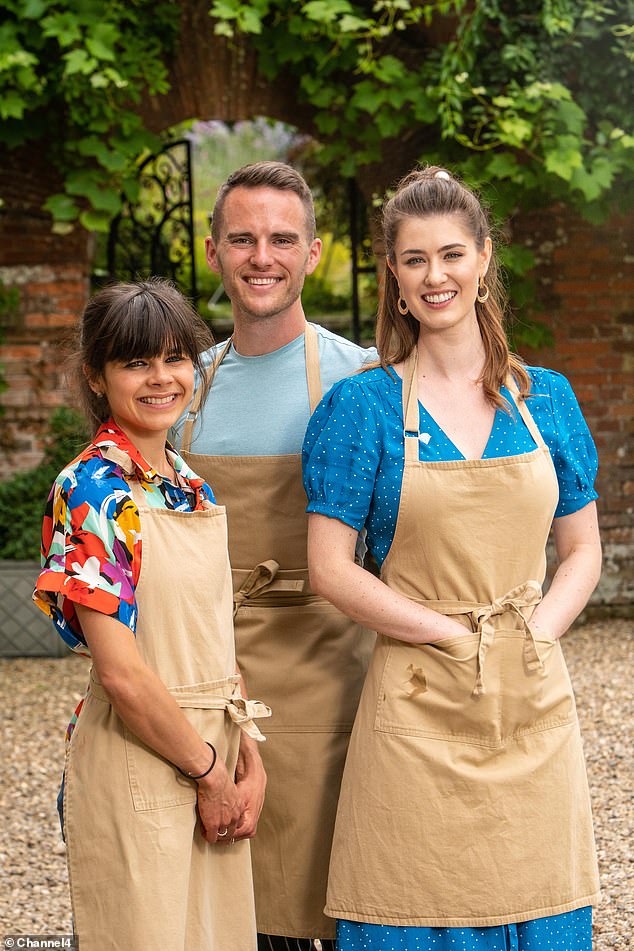 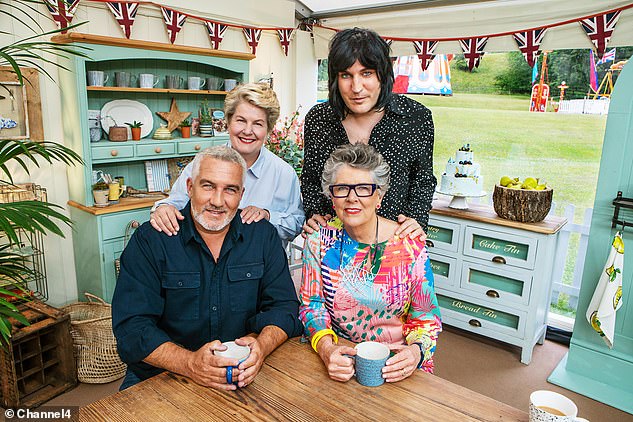 Judges Paul Hollywood and Prue Leith faced a very difficult decision as they decided who was worthy of the Great British Bake Off 2019 champion title. Pictured with presenters Noel Fielding and Sandi Toksvig