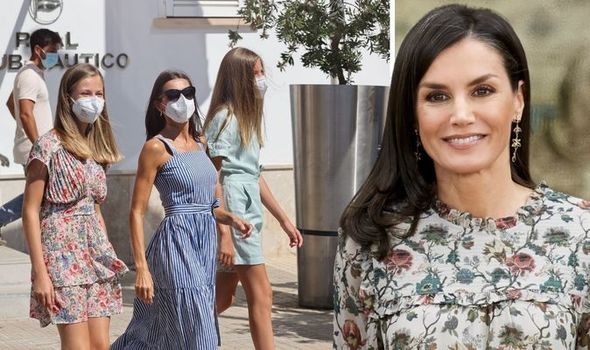 Queen Letizia of Spain married King Felipe VI back in 2004 in the Almudena Cathedral at the Royal Palace of Madrid, Spain. It is said that the couple met two years prior to their marriage. They now have two daughters, Leonor, Princess of Asturias, 15, and Infanta Sofía of Spain, 14.

Before joining the Spanish Royal Family, Queen Letizia was kept very busy in her role as a journalist.

The couple were said to meet at a dinner party where they had an instant connection.

Now working alongside King Felipe VI, the couple are often seen out in public together.

Queen Letizia and King Felipe are also regularly snapped with their daughters, although their lives are kept quite private.

Speaking to Express.co.uk, one expert has said that the Queen of Spain has “instilled a strong sense of duty” in her royal children.

Elaine Soller, Head of Customer Experience at Babysense, commented: “Before Queen Letizia of Spain married into the Royal Family, she was a member of middle-class society, with a degree and working as a news anchor.

“This influenced how grounded she is as a parent – she has been pictured dropping her kids off on their first days of school and ensures, discreetly, that the princesses have time to have fun with their friends.

“When attending to her commitments as a working Queen, she is the picture of confidence, and her strong work ethic has set the bar high for her children.

“She has instilled a strong sense of duty in her children, particularly her oldest daughter, Princess Leonor.

“The 15-year-old heir to the Spanish throne is already attending solo royal engagements.”

Princess Leonor undertook her first ever solo engagement earlier this year, visiting the Cervantes Institute as part of its 30th anniversary celebrations.

Just one year younger than her sister, Infanta Sofía will no doubt follow in Leonor’s footsteps.

The expert added: “When a member of the press once asked Princess Leonor what she wants to be when she grows up, the Queen quickly responded that the Princess will have to do what she ‘has to do’ not what she ‘wants to do’.

“The Spanish Queen has made education a strong focus for her daughters, with the future Queen, Princess Leonor currently pursuing an International Baccalaureate program in Wales.”

The couple will also often show their children affection in public, being snapped hugging their daughters on several occasions.

Most recently, Queen Letizia and King Felipe were pictured saying goodbye to Princess Leonor as she headed to Wales.

One expert has also commented on Kate Middleton, Duchess of Cambridge’s parenting techniques.

Dannielle Haig, Principal Psychologist from DH Consulting explained: “The overt affection William and Kate show towards their children is most definitely unusual for the Royal Family.

“But my, how wonderful it is to see.

“As a psychologist, it is well known that children need to feel affection, love, and safety from their parents to truly thrive and be happy in life.

“To be kept at arm’s length and now shown affection as a child, can have all sorts of negative impacts on a child psychologically and emotionally.”